Losing Antonin Scalia Could be a Blow to the GOP 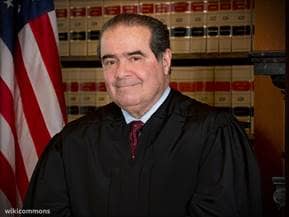 U.S. Supreme Court Justice and icon Antonin Scalia died at his Texas ranch at 79. His colorful language, love of the constitution, and bold faith will be remembered. President Barack Obama said Scalia was one of the most consequential judges and thinkers to serve on the Supreme Court. "He influenced a generation of judges, lawyers, and students, and profoundly shaped the legal landscape,” Obama remarked about the conservative giant.

Scalia was born on March 11, 1936 to Italian parents in Trenton, N.J. He started his law career in Cleveland, Ohio in 1961, and joined University of Virginia six years later as a professor. He joined the Office of Telecommunications Policy of the Federal Communications Commission as general counsel from 1971-1972. Two years later, President Richard M. Nixon nominated him as assistant attorney general of the Justice Department and the Senate confirmed the nomination the same year. President Ronald Regan appointed Scalia in 1986 and the Senate confirmed him in a unanimous vote.

There is conflict brewing. Obama said he will appoint a replacement, which is creating a political uproar on the GOP campaign trail.

Republican Senator and presidential candidate Ted Cruz tweeted “Justice Scalia was an American hero. We owe it to him, & the Nation, for the Senate to ensure that the next president names his replacement.” If the president does appoint someone, republicans are fearful that the ninth Justice picked would favor the left. They said they would contest the appointment from the White House, as many believe like Cruz--the next president should make the appointment, not Obama.

“We're not going to give up the U.S. Supreme Court for a generation by allowing Barack Obama to make one more liberal appointee. We are one justice away from a Supreme Court that would undermine the religious liberty of millions of Americans,” he said.

Obama remained steadfast in nominating someone, regardless of the opposition.

“I plan to fulfill my constitutional responsibilities to nominate a successor in due time,” Obama said.

“There’s plenty of time…for the Senate to fulfill its responsibility to give that person a fair hearing and a timely vote. These are responsibilities I take seriously as should everyone,” Obama said after the news of Scalia was released.

Democrat and Minority Leader Harry Reid said in a statement that there are too many pressing issues pending in the Supreme Court to wait for the next president to make a nomination. “It would be unprecedented in recent history for the Supreme Court to go a year with a vacant seat. Failing to fill this vacancy would be a shameful abdication of one of the Senate's most essential Constitutional responsibilities.”

Republican presidential candidate Jeb Bush said during the GOP debate in South Carolina that Obama has the right to nominate a successor.

"That's his prerogative, Bush told CNN. “The Senate has every right not to confirm that person. Given his choices of Supreme Court justices in the past, the Senate of the United States should not confirm someone who is out of the mainstream.

“[Scalia] was very consistent on his interpretation and his rulings. And that's what we need."

Scalia was considered an intellectual giant, and believed that the constitution is “not a living document. It’s dead, dead, dead.”

The Judge was also controversial in his comments. Take this quote on the legalization of same sex marriage. Obergefell v. Hodges:“When the Fourteenth Amendment was ratified in 1868, every State limited marriage to one man and one woman, and no one doubted the constitutionality of doing so. … Since there is no doubt whatever that the People never decided to prohibit the limitation of marriage to opposite-sex couples, the public debate over same-sex marriage must be allowed to continue. But the Court ends this debate, in an opinion lacking even a thin veneer of law.”