Donald Trump. Outspoken. Brazen. Thrives in confrontation. Yet, he’s been a growing phenomenon since entering the race for the GOP nomination in June 2015. 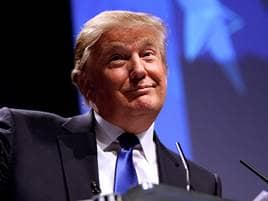 Donald Trump. Outspoken. Brazen. Thrives in confrontation. Yet, he’s been a growing phenomenon since entering the race for the GOP nomination in June 2015. The business guru is resonating with people across the country, regardless of party affiliation, by voicing what many people are feeling about America’s future.

His tough stance on illegal immigration, Iran, and dealing with China has the businessman-turned-reality television star challenging party favorites like Jeb Bush and Ted Cruz. “Our country is in serious trouble. We don’t have victories anymore. We used to have victories, but we don’t have them. When was the last time anybody saw us beating, let’s say, China in a trade deal? They kill us. I beat China all the time. All the time,” Trump said in his announcement speech. Trump stumbles on policy, but it doesn’t appear to be influencing his numbers, or the momentum of his campaign. He is the voice behind the sentiment of many Americans — anger and a sincere distrust.

The polls reflect his dominance over the past few months, despite his politically incorrect off-the-cuff comments. It’s no secret that many feel elected officials are failing; officials are bought by lobbyists and politicians change their vote to increase their political power and wealth.

ABC News analysis Matthew Dowd shared, ‘Trump “leads every single state, including favorite-son states like Florida, where he leads Jeb Bush. Jeb Bush is third. And any Republican that has led for two months and led every state has won the GOP nomination.” Can Trump charm the evangelicals when there are born-again Christians like Rick Santorum, Ted Cruz, and Ben Carson vying for the White House?

Trump has been courting the evangelical vote for some time. In 2012, he donated to several organizations such as the Billy Graham Evangelistic Association, and Samaritan’s Purse. Trump further aligned himself with evangelicals when he spoke about ending persecution of Christians overseas (In a press conference in 2012). Trump, who considers himself a previously pro-choice Presbyterian, announced that viewpoint changed for him after a friend’s experience.

“I’m pro-life, but I changed my view a number of years ago. One of the primary reasons I changed [was] a friend of mine's wife was pregnant, and he didn't really want the baby. He was crying as he was telling me the story. He ends up having the baby and the baby is the apple of his eye. It's the greatest thing that's ever happened to him. And you know here's a baby that wasn't going to be let into life. And I heard this, and some other stories, and I am pro-life,” he said.

No matter what your feelings are regarding Trump, he’s been triumphant in portraying himself as the mouthpiece for the frustrations of the American public — most notably disheartened evangelicals, and right-wing conservatives. He’s apparently on to something; people are sick of de facto politics in America. Deception, lies, lobbyists and political agendas have had their day, according to Trump. We need to “Make America Great Again.”