30 parliamentarians across the globe met this past month at the Nobel Peace Center in Oslo, to launch a religious freedom coalition. 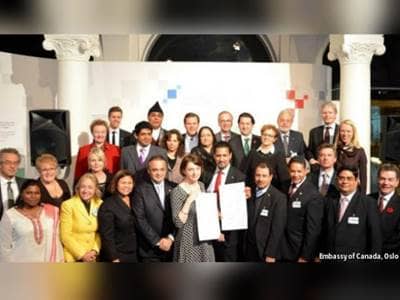 Supported by the US Commission on International Religious Freedom (USCIRF), 30 parliamentarians, representing various nations across the world, met at the Nobel Peace Center in Oslo, and signed a unprecedented joint statement that commits them to “promote religious freedom or belief for all persons through their work and respective institutions and enhance global cooperation.”

USCIRF Chair Katrina Lantos Swett called it an “historic event” and championed the “united effort” to deal with the surmounting issues of religious persecution.

“Despite religious, political, and regional diversity, they were unified in agreeing to combat persecution and support the principles of religious freedom that are found in the Universal Declaration of Human Rights,” said Swett.

The parliamentarians swiftly sent out signed letters to the Prime Minister of Pakistan and the President of Burma, expressing their concerns over the killings and discrimination of various religious groups in their respective countries.

Another letter was written to Pope Francis, urging him to support the initiative and increase talks of religious freedom.