Iran is hiding behind freedom of speech in its Holocaust denial contest. 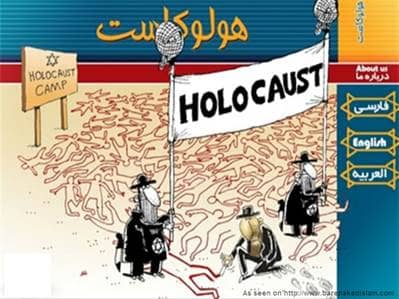 Iran is holding another contest for its homeland and it will make you sick. The theme of the contest is the Holocaust, or what they deem as being fabricated, and submissions are being accepted from 50 countries until April.

The cash award up to 50,000 dollars in cash. Countries expected to participate are  France, UK and the United States. It's freedom of speech said contest secretary Masud Shojai-Tabatabai.

He said that the Charlie Hebdo cartoons were equally as offensive in an interview with the Islamic Republic News Agency. “We do not mean to approve or deny the Holocaust, however, the main question is that why is there no permission to talk about the Holocaust despite their (the West) belief in freedom of speech.

Tabatabai must have selectively forgotten that after Charlie Hebdo went print terrorists killed staffers in France for freedom of speech.

“Why should the oppressed people of Palestine pay the price for the Holocaust? We are also worried about the contemporary holocausts in which a great number of women and children are being killed in Iraq, Yemen and Syria,” Tabatabai offered.

Israeli officials urged the UN to renounce the contest.

Knesset Speaker Yuli Edelstein wrote in a letter addressed to Secretary General Ban Ki-moon to condemn the contest, the Times of Israel reported.

“Words cannot describe the revulsion and protestation of the state of Israel and many across the world at the recurring proof that Iran continues in its policy of Holocaust denial.”

The content was launched in 2006 in challenge of the double standard that the prophet Mohammad can be made fun of, but Jews can’t. Celebrating atrocities that happened during the Holocaust for a sum of 50,000 dollars is all about some ridiculous double standard from a country that wants Jews all annihilated?

“The current President of Iran does not differ from his notorious predecessor, Ahmadinejad,” Edelstein added.

Over six million Jews among many others were murdered during WWII.