Attention Misogynists: This is What an Engineer Looks Like

The stigma that women can’t be pretty and smart has plagued society and our culture for years. Isis Wenger is looking to change this. 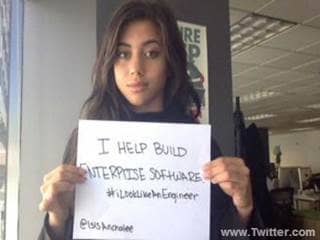 The stigma that women can’t be pretty and smart has plagued society and our culture for years.

Call it what it is: Sexism. Sexism is reflected today within company culture, women’s salaries, and the technological fields. Tech Company OneLogin didn’t know that running recruiting campaigns using their employees would open eyes that sexism is alive in 2015.

The ad used her quote that “My team is great. Everyone is smart, creative and hilarious.”

Yes, women are engineers, developers, and even can walk and talk at the same time. The ad featuring Isis Wenger drew sneers from some males.

She can’t be an engineer, she’s hot.

“If their intention is to attract more women then [sic] it would have been a better to choose a picture with a warm, friendly smile rather than a sexy smirk,” one posted.

People said she did not make the “right face,” and that it was not authentic, or does not she really like her co-workers. So Wenger took to Twitter and posted her experience as a female engineer, and started #ILookLikeAnEngineer to get rid of the gender misconceptions in the tech field.

They are both socially-accepted, “smart” and “normal” guys. This illustrates one of the industry’s deep underlying issues. There is a significant lack of empathy and insight towards recognizing that their “playful/harmless” behavior is,” she wrote on her blog.

Many women have dealt with misogynists in science, engineering, sports, and other male-dominated fields can relate she wrote.

“I’m sure that every other women and non-male identifying person in this field has a long list of mild to extreme personal offenses that they’ve had to tolerate.”