In order for animal cruelty to stop, the media and activists behind the cause must shed light on the topic and fight for the rights of those who can’t speak up. If no one brings these monstrosities to the surface, then thousands of animals will continue to be sacrificed. 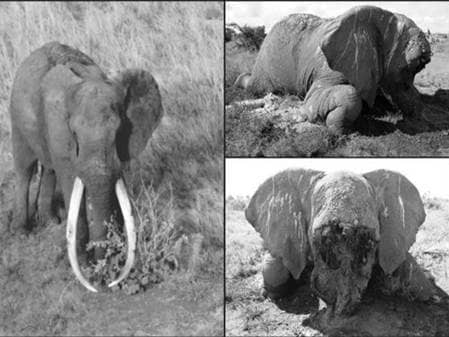 Animal cruelty is an ongoing issue in the world today. The controversial subject is continuing to grow with the recent death of Satao the elephant in Africa.

On May 30, 2014 45 years old Satao, one of the largest living elephants in the world, was murdered by elephant poachers for his ivory tusks. Satao’s ivory tusks were one of the longest, known tusks, as they almost reached the ground.

Dr. Paula Kahumbu, who leads the Hands Off Our Elephants campaign said, “Elephant poaching in Kenya is at least 10 times the official figures.”

In order for animal cruelty to stop, the media and activists behind the cause must shed light on the topic and fight for the rights of those who can’t speak up. If no one brings these monstrosities to the surface, then thousands of animals will continue to be sacrificed.

According to the Convention on International trade in Endangered Species of Wild Fauna and Flora, across Africa at least 20,000 elephants were killed in 2013. Elephants are not the only animals suffering from animal brutality.

In Africa, ivory is more valuable than gold therefore elephant poachers are going to great lengths.

Thousands of greyhounds are killed, every year, because of dog racing and thousands of pit bulls are also killed because of dog fighting. In many countries, there are no animal laws enforced to protect their safety and provide them with rights.

Owners of racing and fighting dogs are cashing in at their animal’s expense. Spectators are also accomplices to the animal brutality, as they stand back and place bets on which dog will reign as victorious.

Over 100 million animals – mice, rats, dogs, cats, rabbits, monkeys, and birds are among the animals that are killed in US laboratories for chemical, drug, food and cosmetic testing each year. And it is estimated that at least fifty percent of the fur in the United States comes from China, where there are no penalties for abusing animals.

Animal rights and activist groups are searching for answers and desperately trying to mandate strict laws against animal brutality. Funding for projects and safety are limited. In countries, outside of United States, many groups are challenged with the lack of animals’ protective laws and the violence that is associated with the products that are a result of death.

The world must come together and fight for the rights of animals, who cannot speak up. No amount of money or goods will replace the existence of living.