American Pharoah, the name intentionally misspelled, became the first horse in over 30 years to win the Triple Crown after securing a win at the 147th Belmont Stakes. 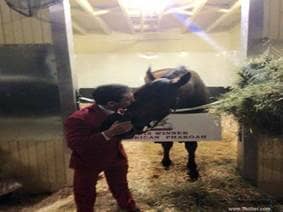 Jockey Victor Espinoza wrote on Twitter that after American Pharoah won the Triple Crown, he personally thanked the three-year-old colt, and rightfully so.

American Pharoah, the name intentionally misspelled, became the first horse in over 30 years to win the Triple Crown after securing a win at the 147th Belmont Stakes.

“After we won the Triple Crown I went to see American Pharoah to give him a big kiss,” wrote, Espinoza.

Trainer Bob Baffert told the "Today Show" American Pharoah is an “incredible animal and so beautiful and kind.

“There’s something about this horse that he just brought it every time. He’s a joy to be around,” Baffert told the press after Saturday’s win. "He deserved it. He's a great horse.”

Espinoza is spiritual and attended the grave site of Grand Lubavitcher Rebbe Menachem Schneerson in Queens to recite prayers before the race, a place where many Jews come to pray, and honor the leader.

The Jewish-Egyptian owners of American Pharoah also believe in a higher power.

“God comes first. [Then] family, country and all the others--all the others, you can put horse racing in them,” Ahmed Zayat owner of American Pharoah and entrepreneur told CBS New York.

American Pharoah not only connected with his owners and jockey, but the public as well.