Beliefnet
RIYADH, April 1 -- A new splinter group of Muslims in Saudi Arabia has declared that the Wahabbi sect, considered strict by many people, is actually promoting lasciviousness and immoral Western values.

Though the customary burkas worn by women in these countries cover all of the body except for the eyes, a new group of imams have decried the garment for showing too much. 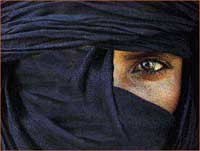 "Women were found to be winking!" said Sheikh Fahd.

They have ruled that in order to prevent "immodesty" and winking, women will have to wear new burkas that cover all but one eye. "This way, if they wink, it will look like a blink," the Imam declared.

Professor Martin Pannetito explained that Westerners should be cautious about judging the behavior through the lens of "American imperialist" values. "It may seem to us that this is overly strict or demeaning to women, but in these cultures this is actually a sign of respect," Pannetito said.

But the move drew sharp criticism from Richard Pipes, director of the Carnegie Foundation, who said