With hundreds of miles separating them, mother and daughter, Becky and Rachel, decided to stay connected through their mutual love of food and all things funny and cooked up a food memoir. 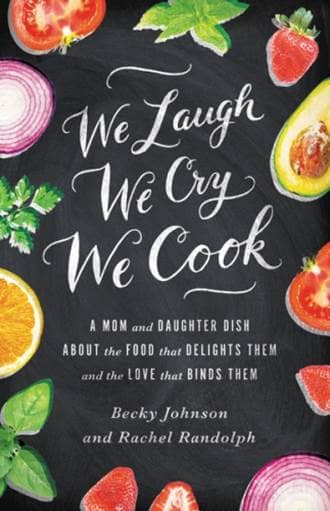 Taken from We Laugh, We Cry, We Cook by Becky Johnson and Rachel Randolph. Copyright © 2013 by Zondervan. Use by permission of Zondervan. www.zondervan.com

While “goin’ vegan,” I was having a blast discovering new recipes and foods to try. Jared, however, thrived in the comfort of familiarity. In the midst of so much change and my wild, adventurous cooking streak, he was soothed by repetition of a few new favorite dishes. Like any good Texan, he loves Mexican food, the spicier the better, which first led to his obsession with Corn Bean Salsa.

It started innocently enough as a simple recipe I made with a can of corn, a can of black beans, a few finely diced onions and bell peppers, jalapeños, cilantro, a squeeze of fresh lime, and a dash of salt and pepper. Jared liked it so much he asked me to make it again.

Until he came to expect his beloved Corn Bean Salsa would always be in the refrigerator. I was glad he liked it, but I eventually began to despise making it. This was my month to get creative and try a variety of new recipes. After a while, no matter how many variations of this salsa I made, it was starting to nauseate me. I just couldn’t take it anymore!

Resentment began rearing its ugly little head, as Jared added it to every meal I made. I’d hand him a beautiful plate of baked falafel, homemade hummus, and Greek salad. He’d smother it with black beans and corn.

I’d serve a bowl of lentil spaghetti with garlic toast and kale chips, and he’d mix his prized salsa into the sauce. In exasperation I asked him, “Why am I even bothering to cook for you if all you really want is a can of beans and corn?”

To be fair, though Jared “seasoned” every dish I made with his salsa, he did eat what I put on his plate and ate it enthusiastically. Still I was up to my ears in corn, beans, and jalapeños, and I refused to enable Jared’s salsa addiction any longer.

“From now on,” I told him, “if you want Corn Bean Salsa, you’ll have to make it yourself.”

As any hardcore addict would do, Jared found a way to not only feed his addiction but take it to the next level. My simple version no longer cut it. He needed something stronger, so he started sautéing and roasting the veggies and adding more and more spice. His recipe was getting so spicy, I couldn’t even eat it if I’d wanted to. He was cutting me out of the whole salsa deal, one jalapeño at a time.

Which brings me back to the fire alarm. By the time we arrived at the condo, Jared’s evolved recipe called for him to sauté fresh jalapeños. Have you ever sautéed jalapeños? I don’t recommend it. It involves a lot of coughing and crying and looking for an open window.

We didn’t live far from the beach condo at the time, so we were planning on staying just one night with Mom and Greg and my grandparents. After everyone had gone to bed that evening, Jared hopped off of the fold-out couch where we had just settled in and started digging items out of his duffel bag. “I packed ingredients for corn bean salsa,” he confessed with a sly grin. “Between you, your mom, and grandmother, I better take advantage of the open kitchen while I can.”

“No, please don’t,” I begged. “We’re in a 700-square-foot condo. The noise will wake up my family, the smell will linger, and the jalapeño steam piping through the vents might send my grandparents into cardiac arrest.”

As addicts do, he insisted he had everything under control. He would be very quiet; he wouldn’t harm anyone; he’d only cook the jalapeños a little. Frustrated and nervous, I sat up on our foldout bed and mumbled under my breath as he chopped veggies, banged pans, and sautéed the dreaded jalapeño-veggie mixture. I coughed with extra gusto and dramatically wiped away tears from my stinging eyes. Without a stove vent in the condo kitchen, the air really was starting to thicken and a foggy haze filled the condo.

I could see that Jared was even starting to sweat nervously, so he began fanning the door to clear the air. And then it happened. The loudest, most ear-piercing sound cut through the thick air, and bright lights flashed through the fog. My family members started sleepily, stumbling from their rooms one at a time. I sat up in bed unable to speak or move.

He’d set off the fire alarm. Why wouldn’t he just listen to me? Why couldn’t he go one stinkin’ day without that stupid salsa? “That’s it,” I silently determined, “he’s starting a twelve-step program as soon as we get home!”

I gained enough composure to open the front door to our thirdfloor condo, hoping to air out the smoke and haze, and what I saw was so unbelievable that I stood there for a second, mouth open, slack-jawed. The red light on every condo front porch was flashing and every single condo’s smoke alarm was going off. Everyone in the entire complex was standing out front in their robes or T-shirts and sweat pants, rubbing their eyes, thinking the same thing: “What the heck?” There was no smoke, no fire, nobody seemed to think we were in any immediate danger, so nobody moved from their perch on their porches.

Off in the distance — and I am not making this up — I could see three fire trucks with lights flashing and sirens blaring, heading down the highway toward us.

Jared looked sheepish, but we were both thinking, “Seriously? One smoking jalapeño in one condo, and they are sending the entire Galveston fire department to put it out?”

Thankfully, before Jared confessed his bean-salsa crime, a lady below us said, “It’s all my fault! I was just making popcorn in the microwave, and it burnt and the alarms went off . . . and . . . I’m so sorry!”

Such relief. Now everything made perfect sense. The entire city fire department was not coming to rescue the lot of us from Jared’s smoking salsa: they were coming, en masse, to fire hose a bag of burnt popcorn.

Meanwhile, on the fold-out couch in the living room . . .

Jared had not only managed to slip out of guilt, but had succeeded in leaving my mom and grandmother in stitches. He knows there’s no better way to win them over than making them laugh. Here I was trying to prove how unthoughtful he’d been, and he had them giggling and hugging and — worst of all — clamoring for his recipe. (What’s up with that? I’m supposed to be the funny foodie in this relationship!)

He crawled into the fold-out couch where I had positioned myself under the covers, my back turned toward him. He leaned over me, kissed my cheek, and whispered, “See, I told you that cooking the salsa wouldn’t be a big deal. Good night, sweetie. I love you.”

I guess I should be thankful that Jared doesn’t get tired of the same old thing day in and day out — there’s something to be said about a loyal man who always kisses me goodnight no matter what, trusting that eventually his wife will see the humor in his fiascos.

He was right. In spite of myself, I did laugh the next morning as Mom and Granny retold the story, enjoying the details all over again.

But don’t tell Jared I told you that.

Recipes That Texans Go OCD Over

After the fire-truck fiasco, Jared and I agreed to find a compromise between my simple recipe and his cough-inducing version. This one
has a friendly level of heat, approved by friends and family. If you are a hardcore spice fanatic, feel free to add more jalapeños or throw in a
serrano pepper for a real kick. — Rachel

Makes about 2 cups.
1 can black beans, rinsed, drained, and patted dry
1½ cups frozen corn (or 1 can, rinsed, drained, and patted dry)
nonstick cooking spray (or olive oil)
½ of a red bell pepper (yields about ½ cup), diced to size of corn kernels
¼ cup of finely diced onion
2 jalapeños, seeded and finely diced (can use serranos for more spice or ½ a poblano pepper for less spice, or omit and use the other half of the red bell pepper for a mild version)

Preheat oven to 400˚. Spray a baking sheet with cooking spray or lightly oil. Put corn, bell peppers, onion, and jalapeño on the pan. Spray the veggies with cooking oil or very lightly coat with olive oil. Sprinkle on the spices and toss together. Put in oven for 15 minutes. Remove, add the garlic to the pan, stir, and put back in oven for 10 more minutes, stirring halfway. Remove and let cool. In a serving bowl, combine beans, corn mixture, cilantro, and a squeeze of lime juice to taste. Add a little more salt if desired.
Chill and serve with chips. Will keep in the fridge for up to 2
days.