The Love Story of an Unlikely Pair: The Saffron Cross

How does a Christian minister and a Hindu monk make their marriage work? It's simple - devote your love into your relationship and anything is possible. 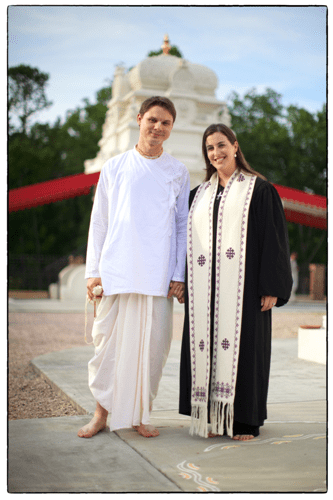 The phrase “opposites attract” couldn’t be more true when it comes to J. Dana Trent and Fred Eaker. “I realized that I was probably not going to meet someone at church,” said Trent. “One in five marriages is in result of online dating. It seemed like a good idea.”

Trent remembers the questionnaire that she filled out when joining eHarmony because it addressed the topic of religion. Trent, a Christian minister, never deliberated the possibility of dating or marrying someone who had a different faith. As she made a conscious effort of reflection, Trent decided that she could date someone with different religious beliefs.

The rest is history; Trent was matched with Fred Eaker who practices the Hindu faith. “Fred’s eHarmony profile hooked me immediately. His responses were passionate and sensitive. It was clear that this was a man who had spent a lot of time thinking about God and the world, and where he belonged among the two. That was refreshing,” said Trent.

How do two individuals, so involved in their different faiths make a relationship work? “The most challenging obstacle, that we have, is finding a shared Sabbath schedule. After many deliberations we figured out that we would both share worship. Keep God center,” said Trent.

“Initially we thought we would divide the time equally. We realized what it became was a seasonal trade off,” said Eaker. “Regardless of what religious tradition you’re involved in you must remember that faith is a path and an adventure. It’s not as important that faith is exactly the faith. What is important is being able to walk the path together and being open to see what God has brought.”

As cliché as it may sound the two are in love and make it work because they are devoted to each other and their relationship. In fact, the idea of writing a book became a reality when the two ventured for a book to help guide and serve as a building block of support; however they came back empty handed. Trent felt compelled to write a book that could serve as a reference for others that were in their situation. “We realized that the Saffron Cross story could be a testimony to God’s love, grace and mercy,” said Trent.

Eaker said he knew within five minutes of meeting Trent that she was the one. “I fall in love with Dana every day. I didn’t really love her as much as I did a year ago, as I do today.”

Love is a powerful element that is pure and takes on many forms. Sometimes it may seem doubtful or rough at times, however love will always prevail. God has a plan for each and every one of us. There is a soul mate out there for everyone.

For more information on the Saffron Cross click here.