6 Things Women Are Secretly Terrified Of in Relationships

No matter how good a woman masks it, these fears will show up time and time again. 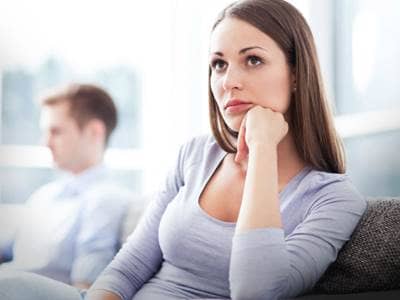 She may wear her heart on her sleeve, but her fears are another story. Whether she’s just coming off the heels of a bad breakup or single and dating around, she has insecurities that may be holding her back from fully investing herself in a new relationship. Knowing what these fears are can help you understand where her head is and how to proceed in your pursuits. Here are six things women are secretly terrified of in relationships. No matter how good a woman masks it, these fears will show up time and time again.

Her New Man Being Like Her Ex: We’re all human, so we all know how hard it is to rebound when we’ve really been hurt. One of the number one things women are terrified of when moving into the next relationship is her new man being like her last man. Yes, we know this an extremely unfair notion, but this idea will show up again and again. Why? Because so many of us are programmed to believe history is going to repeat itself so even if it’s a different guy who very well may be demonstrating completely different qualities than a former partner (or partners), we believe they will still give us the same results in the long run. These thoughts can ultimately sabotage your relationship, especially if the woman is constantly comparing you to her ex. Hopefully, the woman you’re with is dealing with this fear in a healthy way, and not constantly dragging you into her own internal drama.

Saying “I Love You” And The Relationship Not Working Out: Saying “I love you” comes easy for some, but for many women and men, saying the phrase is tough, especially when we’re afraid of what comes after. Many women are terribly afraid of saying “I love you” and the relationship not working out. We know that once this is said, we’re beginning to move into the next chapter of the relationship, and if you’re saying the phrase with meaning, it comes with a wave of strong emotion that we have trouble controlling. If she’s allowed herself to be vulnerable enough to say “I love you” the last thing she wants is for the relationship to not work out, or the person to say it back and not mean it.

That She’s Not Pretty or Sexy Enough: Given society’s obsession with beauty, youth and perfection, many women feel they need to be flawless for a man to want to be and stay with them. Many women are terrified of not being pretty or sexy enough, and because they feel they aren’t, a man will never be satisfied with being with her alone. Some women will even justify being cheated on because of these thoughts. If they look in the mirror, and they are not happy with what they see, they will transfer these insecurities into their relationship. What women have to realize is that their man isn’t obsessing over every little love handle, wrinkle or stretch mark. He loves you for you –your body, your mind and your spirit –and if he doesn’t, he probably isn’t the right one for you. Take some time to tell your woman how beautiful she is. Let her know that she shines from the inside out, especially if she’s constantly putting herself down.

Being Cheated On: If infidelity has been an issue in her past relationships, she is probably terrified of being cheated on again. It doesn’t help that men have the unfortunate reputation of having a wandering eye, and being afraid of commitment. Women are extremely afraid of being with men who are afraid of being committed. Contrary to this assumption, studies have shown otherwise. According to a study done by the Institute of Evolutionary Studies at Binghamton University, “Men in just about every cohort are just as eager to marry or more eager to marry as women are. It's not true that they don't want to commit. Particularly young men, age 21 to 34, are more eager to marry than women are. Throughout every single cohort, men are more eager to have children than women are.” While the idea that men cringe at the idea of being tied down is a common one, women must remember that this is a stereotype, and it is unfair to lump all men into the same category. Fellas, if you see that your woman is insecure in this area, keep the line of communication and trust open and reassure her that she’s the only one for you.

Being Disrespected: On top of the fear of being cheated on, many women are afraid of being disrespected in their relationship, and others around them knowing it. When a woman is disrespected whether it be through the act of being demeaned or a partner openly flirting with other women, it can really shatter her ego, and really bring up a series of insecurities that she may not have even known she had. The idea is terrifying. The act is humiliating.

Settling: Many women are terrified of settling, or compromising for the wrong man, especially if they’ve settled before, or have witnessed other people they are close with settle for Mr. Wrong. A lot of times, we come into relationships with expectations and want to make sure the person we settle down with is Mr. Right, or at least the person we’re willing to spend the rest of our lives with. But in an effort to not be lonely, many of us will rush into relationships and marriages because we don’t want to be alone, or simply because we don’t want to lose out on opportunities like marriage and children by waiting too long to find someone. We think that the relationship may have its issues, but once we get married, we can work those issues out or they will simply go away over time. Sometimes, the thought is that if we work at it, we can change the person we’re with into the man we want them to be. Many women will rush into saying “I do” and begin lowering their standards, not realizing that all the problems they saw in their man before don’t disappear at the altar.