6 Things Men Are Secretly Terrified Of in Relationships

Find out what fears may be holding your man back from taking the relationship to the next level. 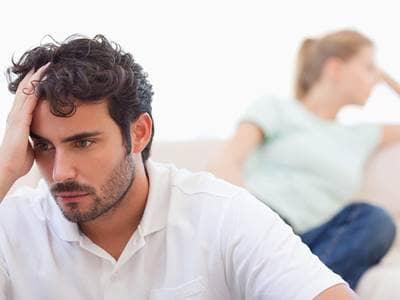 Contrary to the popular belief that all men are terrified of settling down with one partner for the rest of their lives, men aren’t always fearful of monogamy. In fact, many men are ready to find that special person and be in a committed relationship, but other fears and insecurities hold them back from being fully invested. Want to know what fears may be stopping your man back from taking the relationship to next level? Here are six things men are secretly terrified of in relationships. Even men who are fully invested in monogamy and the idea of commitment are horrified of these things.

Having to Check In: Most men understand that communication is important in relationships, but when a man starts to feel like he has to get permission to do things, problems will arise. Nothing’s wrong with you wanting your man to communicate what’s on his agenda, but if he feels like he has to check in every time he wants to go somewhere, or do something with his friends, he’ll start to feel like he’s being suffocated. Men want to know that they can be trusted, and that their time is within their control.

Less Guy Time: Men love their guy time. It means a lot to them and according to a lead psychologist, men need “guy time” to be happy and healthy. Professor Robin Dunbar of Oxford University claims that men who hang with their friends at least twice a week can significantly improve their well-being. Why? According to Dunbar, men who maintain social groups tend to be healthier, recover more quickly and are more generous. For many men, being around the guys makes them feel like they’re a kid again. It’s a time that’s fun and completely care free. For a bachelor, guy time is sacred, the last attachment to the their youth – it’s a safe place for them to say the things they would never say around their girl, and act in ways they would never dare act in front of their girl. So, with relationship commitment, the idea of having less guy’s nights can be scary for many. Ladies, if you want your man to be comfortable in your relationship, don’t try to take away his guy time. Encourage him to spend quality time with his friends. Don’t think about it like it’s a time where he just wants to be away from you (or getting away from you), but a time away where he can’t wait to get back to you. If you’re a guy reading this, keep the line of communication open so trust isn’t compromised. Women with trust issues will have trouble with this.

Changing Their Home Around: Women aren’t the only ones who like their space the way they like their space. Many men are terrified of the idea of having to change their home around when they move in together. Why? Because it’s their space and they may extremely protective of it. Don’t forget that before you, they had their things a certain way. This should be respected. If you’re taking the steps to move in together, be willing to compromise. Embrace the things that he has, and find things that you can both embrace together. You may like aspects of his décor in your shared space and he may enjoy aspects of yours.

Being Humiliated: Your man’s ego is very delicate. The idea of being humiliated or disrespected by his woman flirting with another man (especially his friends) or bashing him in front of other people (especially his friends), can really burn at his ego. If he feels like he’s being disrespected over and over again, he may have trouble moving forward in the relationship. Ask yourself if you would be comfortable with your man doing the same thing you’re doing in the relationship. If you wouldn’t be, then those actions need to be avoided.

Being Cheated On: While men have the reputation of having a wandering eye, and being fearful of monogamy, many men are terrified of being cheated on by the woman they’re with. When a man’s invested in the relationship, he wants to know that he’s the only one you want to be with. If you’re inviting other men into your relationship by cheating, it can be a major blow that your relationship can’t recover from. It may take awhile for him to even begin to trust again. Also, many men fear being cheated on because they know that they’ve had trouble being faithful before, or have been with other women who have had trouble being faithful. When a man brings these insecurities into the relationship, these too can chip away at trust in your relationship.

Emotional Baggage: When a man enters into a new relationship, he wants it to start with a clean slate. He wants to know that he’s not being compared to other men, particularly your exes. Men also don’t want to have to deal with a ton of emotional baggage that they didn’t create. Sometimes, the fear is simply that they will be judged for the actions of another, and the belief that the closer they get to you, the more that baggage will come to surface. One way to keep your man comfortable and confident is to not bring up your exes, no matter how much you want to. While it’s ok to discuss the ways you were hurt in the past, these shouldn’t be thrown in his face when you’re unhappy, or things aren’t going your way. Judge your man for the qualities he’s showing you, not what someone else did.