When Pets Cross the Rainbow Bridge

Did pets go to heaven? I set out to explore the topic and came upon a comforting pet poem titled "The Rainbow Bridge."

Editor's Note: "The Divine Life of Animals" explores whether animals have souls that live on even after death. Ptolemy Tompkins, a senior editor at Angels on Earth magazine for Guideposts and a monthly angel columnist for Beliefnet, delves into history, philosophy, religious texts, and personal stories to support his belief that animals do have souls and they do go to heaven. In the excerpt below, Tompkins shares one of the reasons why he was first fascinated with pets and the afterlife.

I went to my boss [at Guideposts magazine] and told him I wanted to put together a piece on the subject of pets and the afterlife.

“Why not?” he said. “No one’s ever done that in the magazine before.”

The article came out in the February 2005 issue under the title “Will My Pet Go to Heaven?” I decided to focus the piece on the Hebrew term nephesh and how the true meaning of that word had been glossed over by many of the Bible’s commentators and translators. I quoted Isaiah’s prophetic passage about a time to come when the lion would lie down with the lamb, and talked a little bit about the rainbow that God sets in the sky after the flood in Genesis, as a promise that the link between the divine and the earthly will never again be broken. Leaving out the complexities of the Hebrew view of the human soul, the Hebrew and Christian relationship to Greek thought, and other such thorny matters, my conclusion was a simple but heartfelt one: not only does the Bible in both the Hebrew and New Testaments provide plenty of suggestions that animals are valuable before God, but the evidence of our hearts does so as well. Augustine and Aquinas (I mentioned them briefly too) might disagree, but from my perspective, any heaven that didn’t include animals would clearly be less than truly heavenly.

I also mentioned, in passing, a popular piece that had circulated on the Internet called “The Rainbow Bridge.” The poem talked about a bridge that the souls of the dead cross when they come to heaven, and the pets that they find waiting for them on it:

Just this side of heaven is a place called Rainbow Bridge.

When an animal dies that has been especially close to someone here, that pet goes to Rainbow Bridge.

There are meadows and hills for all of our special friends so they can run and play together.

There is plenty of food, water and sunshine, and our friends are warm and comfortable.

All the animals who had been ill and old are restored to health and vigor; those who were hurt or maimed are made whole and strong again, just as we remember them in our dreams of days and times gone by.

The animals are happy and content, except for one small thing; they each miss someone very special to them, who had to be left behind.

They all run and play together, but the day comes when one suddenly stops and looks into the distance. His bright eyes are intent; his eager body quivers. Suddenly he begins to run from the group, flying over the green grass, his legs carrying him faster and faster.

You have been spotted, and when you and your special friend finally meet, you cling together in joyous reunion, never to be parted again. The happy kisses rain upon your face; your hands again caress the beloved head, and you look once more into the trusting eyes of your pet, so long gone from your life but never absent from your heart.

Then you cross Rainbow Bridge together. . . .

Truth be told, I couldn’t help but find “The Rainbow Bridge” a little on the sugary side. But I knew that the poem was popular, which was why I included a mention of it in my piece all the same.

I received far and away more mail for “Will My Pet Go to Heaven?” than I had for any other piece of writing I’d done for Guideposts. People—in astonishing numbers—wrote in to thank me for stating what they’d long known but had despaired of ever hearing from someone else: yes, animals go to heaven; end of story.

One of the things I found most surprising in those letters was how often people told me that though they personally believed animals had souls, they felt they shouldn’t be too vocal about this fact. Many people said they kept their fee lings secret for fear of being made fun of. With some surprise, I realized that countless earnest, unapologetic, Bible-reading Christians out there—people who would happily tell a perfect stranger about their faith without a care as to whether that person judged them for it or not—felt strangely embarrassed about confessing their belief that not just people, but animals too, enjoyed a future life beyond the body.

Several veterinarians wrote to say that they had photocopied my article and placed stacks of it in their waiting rooms. “I’ve bee n practicing veterinary medicine for twenty years,” one of those vets told me. “I know that what you wrote in your article is true. But many of my clients who’ve lost their animal companions hear different from their clergy. They go to them hoping to be reassured that their pet is safe in heaven, and that they’ll see them again someday. But the pastors oft en tell them just the opposite. ‘Animals don’t have souls. Your pet is gone forever and you’re just going to have to learn to come to terms with that.’ It crushes the owners. Your article shows that there’s strong scriptural evidence that animals survive death, and though I’ve long bee n convinced of that myself, it’s a message I’ve never see n spelled out before.”

But the most common sort of letter came from Guideposts readers who, because they weren’t computer-savvy, had not see n “The Rainbow Bridge.” Many of these people told me they’d heard tell of this wonderful piece of writing, but had never see n it. Could I send them a copy?

I printed out a dozen copies of “The Rainbow Bridge” and sent them off to everyone who asked. Then a dozen more. I was happy to oblige these people, but I couldn’t help fee ling puzzled each time I sealed up yet another envelope. Why were people so nuts about this piece of writing? The title alone see med enough to instantly ignite their interest.

One day, folding up yet another copy of “The Rainbow Bridge” for yet another Guideposts reader who couldn’t wait to get her hands on it, I stopped and read the whole thing through one more time. I still found it a little cloying, but I suddenly saw something in it—something that had been right there in front of me but that I’d somehow missed each time I’d read it before. “The Rainbow Bridge” might have been corny, but, language aside, it was making an entirely valid and vital spiritual point. The world is a profoundly happy- sad place. It is sad because we are currently cut off from a larger, more spiritual world to which we used to be intimately connected. And it is happy because the division that separates us from that larger existence, though terrible and huge, is crossable. There is a bridge between the worlds, one that is open to both humans and animals, and on it all people and animals will one day be reunited. 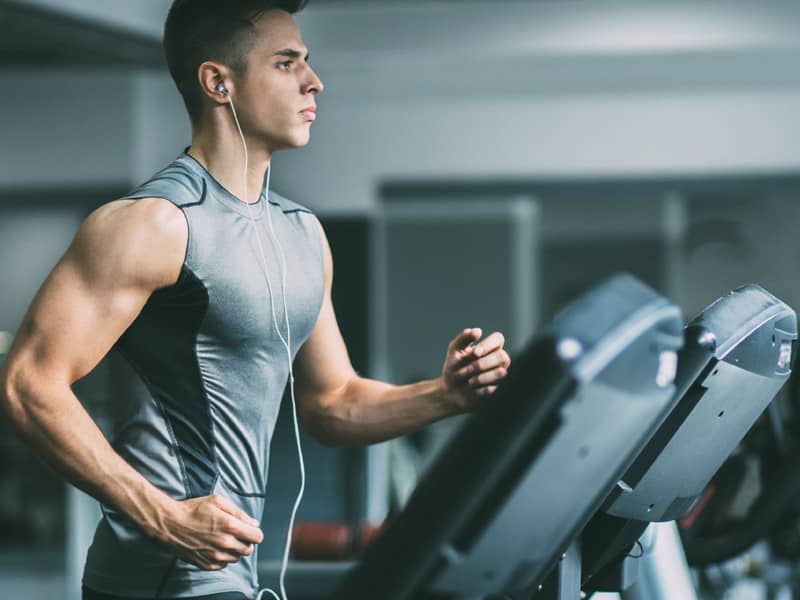 Is Your Relationship With Exercise Unhealthy?