How does one family handle the deployment of a husband and father?

David French worked his way through Harvard to become a constitutional attorney, but at the age of 37 he decided to serve in a different way by enlisting in the U.S. Army. As a father of three, David and his wife Nancy explain what his service in Iraq has meant to the family. Read more about their story in their new book "Home and Away" available to purchase online.

Jana Melpolder: What is the main message that you want the audience to take from your new book “Home and Away"?

David French: This not only takes the reader into the 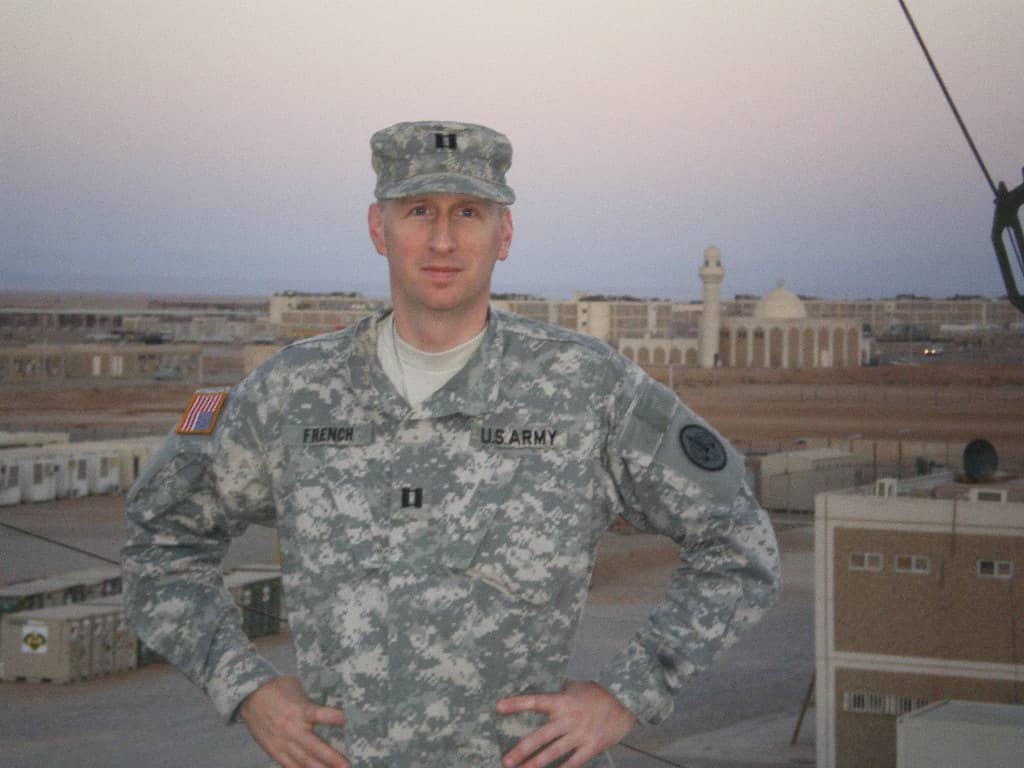 nitty gritty of what was happening in Iraq, but also the reality of what it’s like to be a family with a soldier serving overseas. What the challenges are: how to persevere through them and how to go through the experience with a lot of fear, faith and hope.

How do you feel about your deployment, David? How has this situation brought you closer together as a couple and as a family?

David: This is a unified decision for me to join and for me to volunteer to go to Iraq. You know we went through this together and it brought us closer, and one of the purposes was to demonstrate to our children that somethings are more important than yourself. And I think that the year in Iraq demonstrated that to them more clearly than any words ever could.

Nancy, how do you feel the deployment has changed your relationship?

Nancy French: I think that we’re more fearless. I don’t worry about things as much as I should. I put more trust in God over the day-to-day affairs of our lives. And so it makes me less leery and it makes you worry less. So it frees you up to be more adventurous, which helps the relationship.

What lessons are you trying to teach your children through your decision to serve?

David: You can talk the talk all you want but nothing does it more than walking the walk. We have three children. But we noticed in our two older children [that] they matured enormously during the course of the deployment. But I think the best act of parenting that I ever did was going to Iraq. I can even remember when I was considering joining [that] I was talking to a very dear friend of mine. I said, "You realize if I join I'm going to be away from my family a lot more and if I end up going to Iraq that I’ll be away, at the very least, for the full year of the deployment. Something bad or terrible could happen to me and I could never see them again". And he said, "What’s the better way to raise your children? Is it to be constantly present or is it to give them an example of what it’s like to live out God’s call on your life"? And that comment made a tremendous impression upon me. And I think in communicating this and in communicating that reality to our children it’s had a tremendous positive impression on them. I’ve seen both of them have a much softer heart towards other people, a much greater concern and awareness for other people than they did before I left.

Nancy: When he went to Iraq, one of the ways that we explained it to them is that there are people over there who needed help. It helps them understand that that’s what you should do in life. While David was in Iraq the kids came up to me with a long list of reasons why we should adopt an orphan from wherever because it had kind of gotten into their system that you help people who are in duress. That’s how we ended up with our third child. Service kind of got a hold of our kids’ hearts.

What advise would you offer to families that deal with deployment?

David: That’s a great question. I think something that Nancy did is that, rather than just sort of marking time while I was gone and crossing the dates off the calendar, [she] had a series of projects that she tried to do. (Not just so that our family would endure while I was gone but I would come back to a better family [too]). And so she was incredibly industrious and I think that that really helped the time pass. And then the other thing was you can’t be afraid to ask for help. You know there is no shame when you live in a military community where people are more familiar with deployment experience. There’s no shame in asking for help. There [are a] lot of people around you that will actually view their help for you and their assistance for you as in some small way their own way of helping out with supporting the troops. Supporting the war effort and being good citizens. And so don’t be afraid to ask for help.

Nancy: While he was gone just knowing that God was in control of his life and death. And it’s not really something that you have to accept but that’s just the way it is anyway. You know that’s just the reality of it and once you let that reality sink into your soul you just feel a lot less anxious. And so I really did not worry as much as people figured just because I just really trusted [that] this is what God wanted us to do.

And that ultimately the outcome would be His. And so you just have to look at it the right way because this could be really bad; it’s terrible and inconvenient, difficult and emotional. And it was all of those things but it was also something that we endured and came out better for it.

David: Military service is so rare, you know I think less than one-third of one percent of Americans have been deployed in the tour. One of the things that I hope to accomplish with this book is tell the story of some of those heros that I served with. It was my privilege to be with them and to do what I could to help them. But it was the guys that I served with who helped turn the tide in the war in Iraq, and many of the guys that I served with didn’t come home. And it’s my privilege to be able to tell at least a little bit of their stories: the things that they did and the sacrifices that they bore.