It's time to gather around the TV with your family and watch classic Christmas movies, in honor of the season here are 10 classics for your viewing pleasure!

When I was a child and things like DVR and Netflix streaming didn't exist, I can remember eagerly getting out the TV Guide with my mother during the holidays and planning out our holiday viewing schedule. One year we taped most of the specials on VHS, and I have fond memories of watching Rudolph the Red Nosed Reindeer over and over and over until the picture became so grainy it was practically unwatchable.

We all love these movies, so why don't you take a walk down memory lane with me as I count down Beliefnet's Top 10 Animated Christmas Movies.  Sit back, pour yourself a nice mug of hot cocoa, and get yourself into the Christmas spirit!

The inspiring, yet strange, story of Frosty is so well suited to animation that it’s hard to imagine that the song came first. It doesn’t hurt that it is a fantastic version of the tale that has been dazzling children ever since.

Claymation may be somewhat out of style, but this delightfully cheesy romp through Christmas in the ‘80s is worth visiting again and again. Whether it’s the very literal carol of the bells, the romantic walruses, or the classic California Raisins, there is something here for everyone.

The story of Rudolph is usually told in the ever so brief Christmas carol, but this film has managed to become almost as recognizable as the song. The stop motion animation gives the story a unique charm, and even the new characters add something to the Rudolph mythology. The island of misfit toys and the Abominable Snowmonster are perfectly plausible in a world where a flying reindeer exists.

How the Grinch Stole Christmas

The transition from book to film is usually a rocky one, and often results in a movie that is a poor imitation of its source material. But this 1966 television adaptation of the classic Dr. Seuss book achieved the impossible – it became even more of a classic than the book. How the Grinch Stole Christmas manages to be heartfelt celebration of the Christmas spirit without becoming trite, and when the Grinch's "small heart grew three sizes that day," you'll find yourself cheering despite the fact that you've seen the special 18 times already.

A Charlie Brown Christmas may be the most recognizable Christmas special of all time. Its timeless Peanuts characters, adorable children’s voices and sweet interpretation of the Christmas story has been captivating generations of people since 1965. These unique qualities, along with the fantastic Vince Guaraldi soundtrack, make this a must-see every Christmas.

The chubby orange cat may be known most for torturing Odie and eating lasagna, but this special revealed that he has a soft spot to go with the soft belly. Garfield manages, partially by accident of course, to unite an entire family in this heartwarming story. All the comic regulars show up, making it a must watch for Garfield fans young and old.

Emmet Otter's Jug-Band Christmas isn't as well known as some of the other entries on the list, and since it uses puppetry rather than animation, I'm cheating a little by including it here, but it has such a special place in this editor's heart that I'll break a few of the 'rules.'

Based on a children's book and brought to life by the masterful Jim Henson, the special follows Emmet Otter and his Ma, two kindhearted woodland creatures who make ends meet by doing laundry and other odd jobs for the town's richer residents. When they hear of a local talent contest, they put together a jug-band in the hopes of winning a some extra money to buy presents for one another come Christmas time. Unfortunately, their folksy tunes are up against the rock and roll thrashings of the Riverbottom Nightmare Band.

The film is sweet, well made, has some wonderful folk tunes, and is a perfect addition to your holiday television watching.

Santa Claus is Comin' to Town

From 1964 to 1985, Rankin/Bass created some of the most memorable and beloved Christmas specials. From Rudolph the Red Nosed Reindeer to Frosty the Snowmen, they were the go-to company for quality stop-motion holiday fare. Santa Claus is Comin' to Town, which aired in 1970, is yet another of their programs that can be found on television every year at Christmastime. Narrated by Fred Astaire, it sets out to explain the origins of everything from why Santa goes down the chimney (an evil toy-hating mayor has all of the children's doors locked) to how reindeer can fly (magic feed corn). It can be a bit goofy at times, but ultimately Santa Claus is Comin' to Town is a fun look at how legend of Santa Claus may have come to pass.

The Nightmare Before Christmas

A claymation film from Tim Burton that simultaneously combines a Halloween film with a Christmas one seems like a terrible idea. And it may be a bit too much for some younger children to take (the gifts that Jack Skeleton hands out to the children are a little macabre), but at its heart The Nightmare Before Christmas is simple, tender story about a misguided hero discovering what Christmas is really all about.

The clever and brilliant animation work, combined with one of the best original soundtracks to grace an animated film in the past two decades, makes The Nightmare Before Christmas both special and unforgettable.

The story of Scrooge and his Christmas-time ghosts is a brilliant holiday tale of love and hope for change. It has been told in many, many different ways, but this version may top them all. Many of your favorite Disney characters show up to tell the story, making it a charming experience for the whole family. 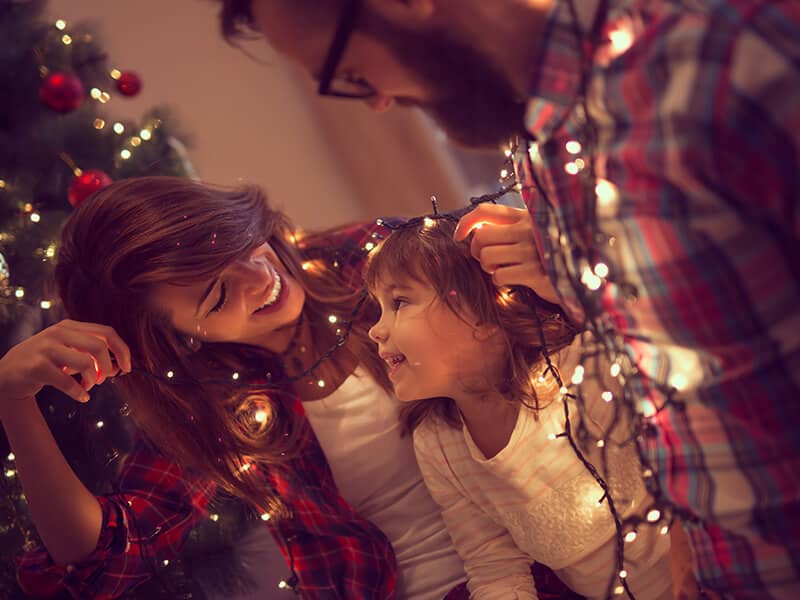 Can Non-Christians Celebrate Christmas?
Christians only or holiday for all? Read next feature >