Celebrate the Fourth of July with these great patriotic songs! 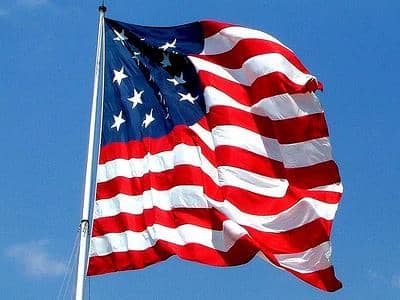 July 4th is a time of celebration, remembrance, fireworks, and cookouts. It is also a time for great music. There are many songs about America; some are positive, some are reflective, and some are just about having fun. They all seek in some way to capture the American spirit in song, and here are 10 of those songs to inspire you on July 4th!


For many Americans it is impossible to hear the phrase “born in the USA” and not think of the catchy refrain of this Bruce Springsteen anti-war classic. The familiar rock song chronicles the journey of a soldier from a small town to the war, and then back into the arms of a country that won't accept him. The dark story is backed by Bruce Springsteen’s classically upbeat music, which reflects the patriotic pride of serving your country even when it means giving up everything.


This Brooks & Dunn hit takes a look at people from all walks of America. From the streets of New York, to the lights of LA, the emphasis of this song is on how anything is possible for everyone in America. There are millions here “dreaming in red, white, and blue.” While this country song echoes the heart of the American south, it is still a part of all of us.


Lee Greenwood's lone hit is the quintessential patriotic song, capturing the pride of this great nation in the form of a melody that is recognizable across the nation. It may be a bit dated, and maybe even a little cheesy, but it's hard to deny the power of a song that is performed in nearly every city each July 4th. Lee Greenwood may not have had any other hits, but he nailed it with this one.


Neil Diamond's “America” captures the spirit of those who have come to America looking for a better way of life. It looks at immigration in a positive way, referencing both the contemporary 80s and the American dream of the early 1900s. Many people have risked everything to come to this land of liberty in search of a better way to live. Today this song reminds us all of the blessings we have here, as well as the duty we have to welcome those who wish to be a part of those blessings!


James Brown contributed this funky piece to our patriotic songs list via the Rocky IV soundtrack. The song itself puts a soul twist on many of the themes in the other songs on our list. It glorifies the highways and byways of this land, focusing on celebrating the joy that can be found in America's cities and how good it feels to be here.


“Independence Day” isn’t a song about America, but it is about the spirit of freedom. The lyrics tell the story of a woman who is abused by her spouse and the violent steps she takes to claim her freedom. As the song says, “I’m not saying if it’s right or wrong,” but the history of America certainly shows that freedom is worth fighting for. That’s the real message of this song, and it’s certainly a part of our nation’s history.


“America the Beautiful” is considered by many to be as inspiring as our own national anthem. While many versions have been recorded, Ray Charles’ performance has risen to the top. The soulful singer put a gospel twist on this traditional tune and made it the most stirring rendition of the song yet. Just see for yourself.


There are numerous songs about how great it is to dream in America, but this John Cougar Mellencamp hit takes on a more narrow focus – the dream of pursuing music. The stars who captivate, many of whom are on this list, come from all parts of America. This song celebrates them, reminding us that entertainers often give up everything they have in order to chase their dreams, and there isn't anything much more American than that.


This stunning song isn't first a patriotic song, but the 1964 single does represent something central to America – freedom. “A Change Is Gonna Come” became the song that defined the civil rights movement of the sixties. It's stirring refrain captured both the pain and hope of that dark time in our nation's history. As a patriotic song it works in two ways – it reminds us of the freedoms that we have, but it also reminds that we have a long way to go until everyone in America can experience that same freedom.

10. Woody Guthrie - This Land Is Your Land


Woody Guthrie's “This Land Is Our Land” is an instantly recognizable folk classic. The song focuses on the beautiful geography of America, describing the many sites that can be seen across the country. It's a land of promise, but it is also a land of beauty. The song also serves as a reminder that even as the times change, this land is ours and it always will be. It was made for you and me.