The Amazing Story of the Real Santa Claus

Yes, there was a real Santa Claus – and he was a hero during some very difficult times!

Yes there is a Santa 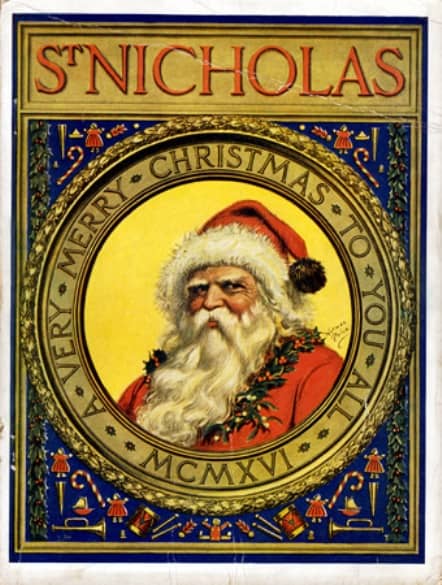 Yes there is a Santa

No matter what the kids on the playground may say, yes, there is a Santa Claus. He was a Greek Christian born in Turkey around 300 A.D. who gave away everything he had to help the poor – and loved leaving presents for the needy throughout his life ... regardless of whether he got any thanks or credit. His devout Christian parents died in an epidemic when he was a young man. Convinced he must obey Jesus' words to "sell what you own and give the money to the poor," he did just that ... and gave away his entire inheritance. He was named Bishop of Myra while still quite young – one legend says he was selected while still a boy – and was known throughout the land for his generosity, his love for children, his concern for sailors and ships ... and a particular compassion for the falsely accused. 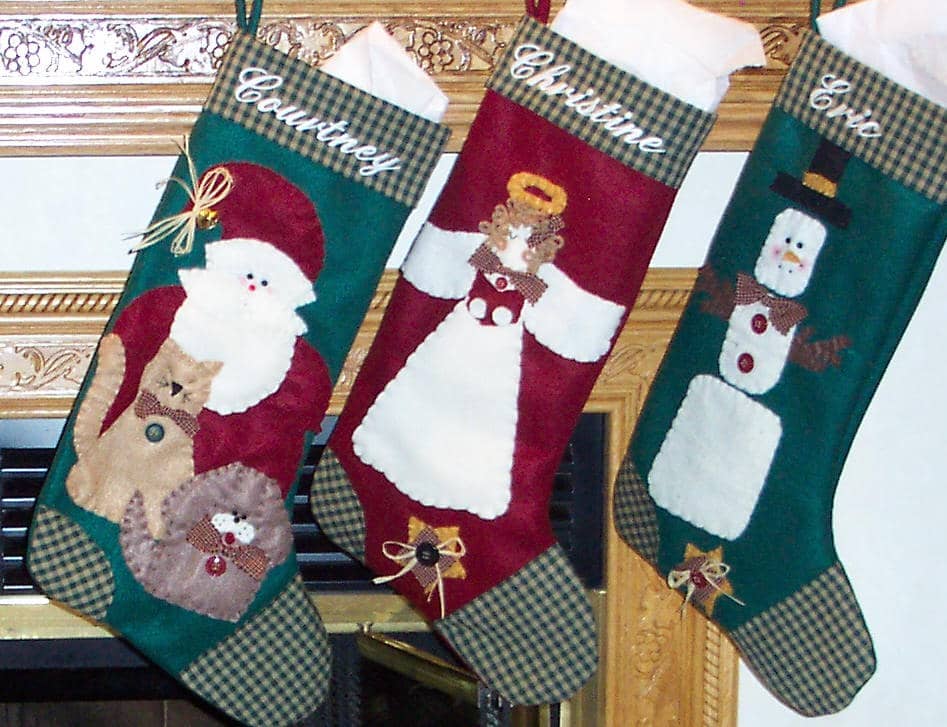 In the nearby town of Patara, a merchant had lost all his money, but had three lovely daughters. Because of his business failure, they lacked dowries – money required in those days to help a young couple get started in life.

The larger the dowry, the better the chance that a young woman would find a good, ambitious husband.

The father was despondent at the idea that they would have to live as servants and spinsters. The situation came to the ears of Nicholas, who under cover of darkness tossed a bag of gold in at the open window of the man's house as a dowry for the eldest girl -- and she was soon married.

Then Nicholas did the same for the second and third.

The last time, the father was on watch, recognized his benefactor and was overwhelmed with gratitude. Nicholas forbade him from telling anybody.

The bags of gold were said to have landed in stockings left in front of the fire to dry. This led to today’s custom of children hanging stockings on Christmas Eve. 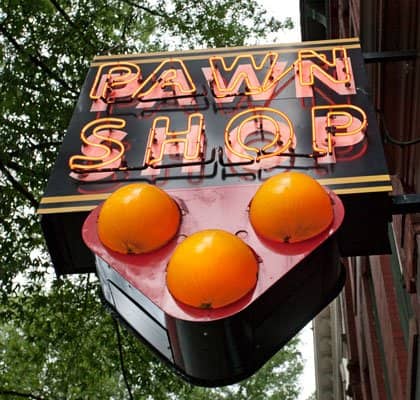 A variation of the story says it was not bags of gold, but gold balls. That is why three gold balls are one of the symbols for St. Nicholas – the patron saint of all pawn shops. 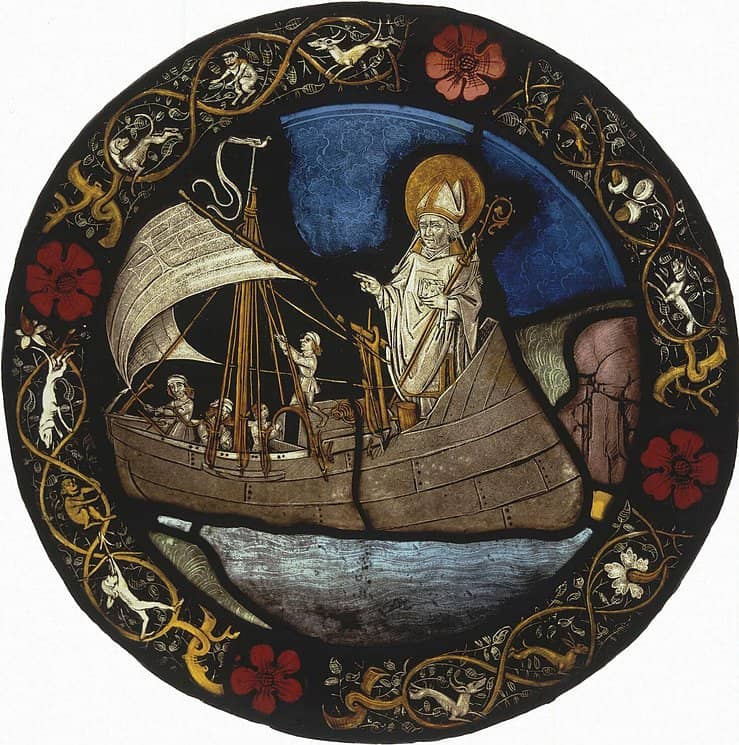 When young, Nicholas made a pilgrimage to the Holy Land. There as he walked where Jesus walked, he sought to more deeply experience Jesus in his life.

Returning by sea, a mighty storm threatened to wreck the ship. Nicholas calmly prayed. The terrified sailors were amazed when the wind and waves suddenly calmed, sparing them all.

And so St. Nicholas is the patron of sailors and voyagers.

Imprisoned for his faith Imprisoned for his faith

Under the vehemently anti-Christian Roman Emperor Diocletian -- who was ruthless in his persecution of Christians, Bishop Nicholas was arrested.

He was beaten, exiled and finally thrown into a prison.

The jails were so full of Christians that there was limited room for real criminals. To ease the crowding, the execution of Christians was used as entertainment.

Patron of the accused

Patron of the accused

When the Emperor Constantine became a Christian, Nicholas was released.

Many stories in both the Eastern Orthodox and Roman Catholic traditions tell of Nicholas saving his people from famine, sparing the lives of those innocently accused, and demonstrating generosity.

A repeated theme is that he did his kind deeds in secret, wanting no recognition in return. 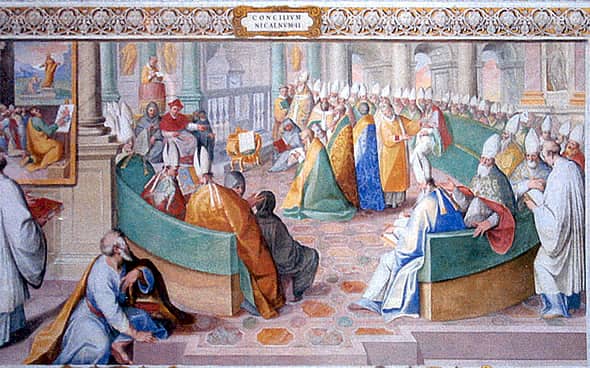 According to one biographer – writing five centuries after Nicholas's death – Nicholas led the fight against the Arian heresy that denied the divinity of Christ.

Some biographers say he traveled to the Council of Nicaea and slapped Arius in the face! The other bishops were shocked that he would be so rude to Arias and relieved him as bishop. Then, according to legend, miraculously, both Jesus and Mary appeared to defend him. Nicholas' detractors quickly recanted. Perhaps only legend, these events were not recorded in the official accounts of the Council, which also don’t list Nicholas as a participant.

Today’s Nicaean Creed emerged from the Council – and today is repeated in many churches weekly, affirming that “We believe in one God, the Father Almighty, Maker of all things visible and invisible. And in one Lord Jesus Christ, the Son of God, begotten of the Father, Light of Light, begotten and not made, being of one substance with the Father …”

A fall of Manna 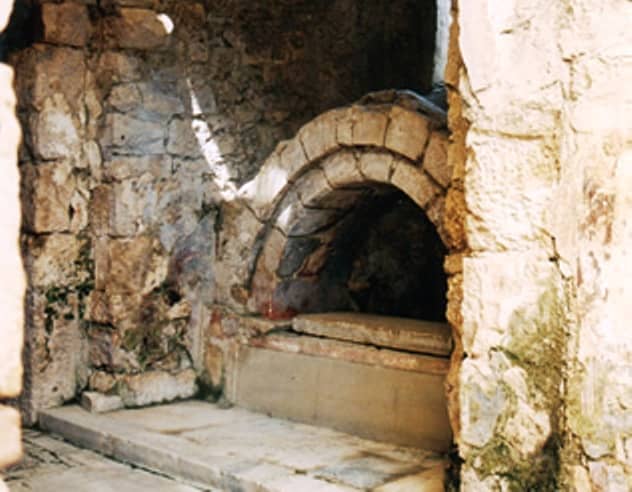 A fall of Manna

He died December 6, AD 343 in the town Myra and was buried in his cathedral church. It is said that manna – the same that miraculously fell from heaven while the Israelites were following Moses through the Wilderness – formed atop his grave and had healing powers. His tomb in modern-day Turkey is still the destination of thousands of pilgrims each year. 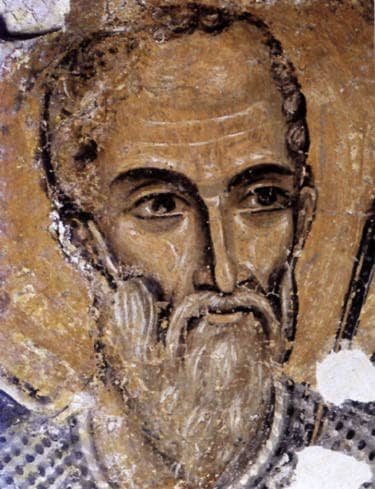 The anniversary of his death became a day of celebration, St. Nicholas Day, December 6th (December 19 on the old Julian calendar).

The emperor Justinian dedicated a church in Constantinople to him. A Greek historian wrote, "The West as well as the East acclaims and glorifies him. Wherever there are people, his name is revered and churches are built in his honor. All Christians reverence his memory and call upon his protection." Several centuries after his death, the townspeople of Myra were celebrating his feast day when a band of Arab pirates from Crete attacked the town, sacked its treasures and snatched prisoners to sell as slaves.

One captured youngster, Basilios, ended up as the personal cupbearer to the Emir, bringing his wine in a beautiful golden cup.

For Basilios' parents, who were devastated at the loss of their only child, the year passed slowly, filled with grief.

As St. Nicholas Day approached, his mother refused to join in the festivities. Instead, she went to church and prayed for her little boy. Far away, as Basilios was serving the Emir, he was suddenly whisked up and away. St. Nicholas appeared to the terrified boy, blessed him, and set him down at his home back in Myra.

The legend says that Basilios materialized in front of his praying mother, still holding the Emir's golden cup. 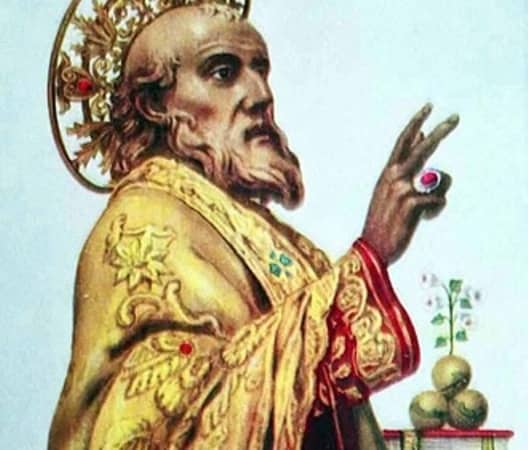 He's said to have been represented by medieval artists more frequently than any saint but Mary.

Nearly 400 churches were dedicated in his honor in England alone during the late Middle Ages. Many St. Nicholas legends deal with wicked bad guys kidnapping or killing children and St. Nicholas appearing, praying for them – and returning them to their parents. In France the story is told of three small children, wandering in their play until lost, lured, and captured by a slave dealer.

St. Nicholas appears, appeals to God and returns them to their families. And so St. Nicholas is the patron and protector of children. 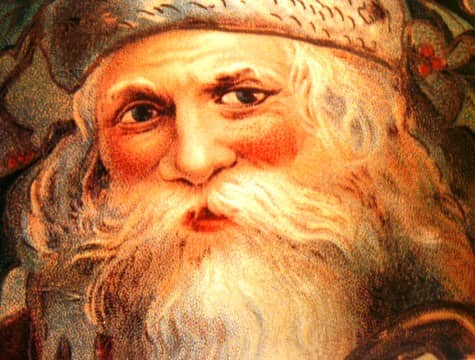 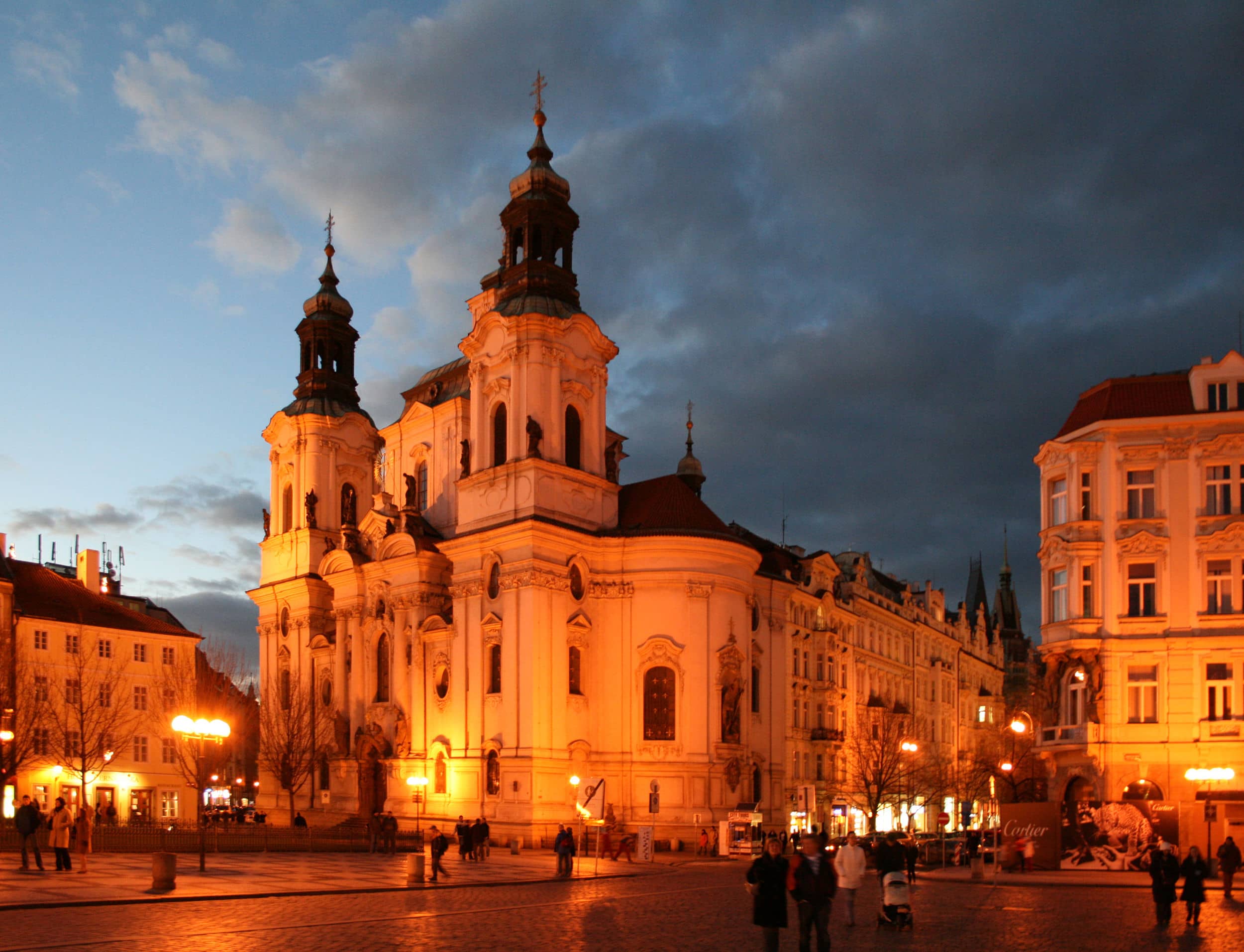 Following his baptism in Constantinople, Czar Vladimir I brought St. Nicholas' stories and devotion back to Russia.

Today Nicholas remains that nation’s most beloved saint – so widely revered that more than 2,000 churches were named for him. In some countries, he is called Papa Noel, Sinter Klaus and yes, Santa Claus – which is derived from Santa, “saint” in many languages and Claus, short for Nicholas.

His tomb in Myra is still a popular place of pilgrimage. Around 1000 A.D., because of the many wars and attacks in the region, some Christians were concerned that access to the tomb might become difficult – particularly when Turkey was overrun by Islam. In the spring of 1087, sailors from Bari succeeded in spiriting away his bones and bringing them to Bari, a seaport on the southeast coast of Italy.

An impressive church was built over his crypt and many faithful continue to journey to honor the saint of children and sailors – and the inspiration for today’s Santa Claus. 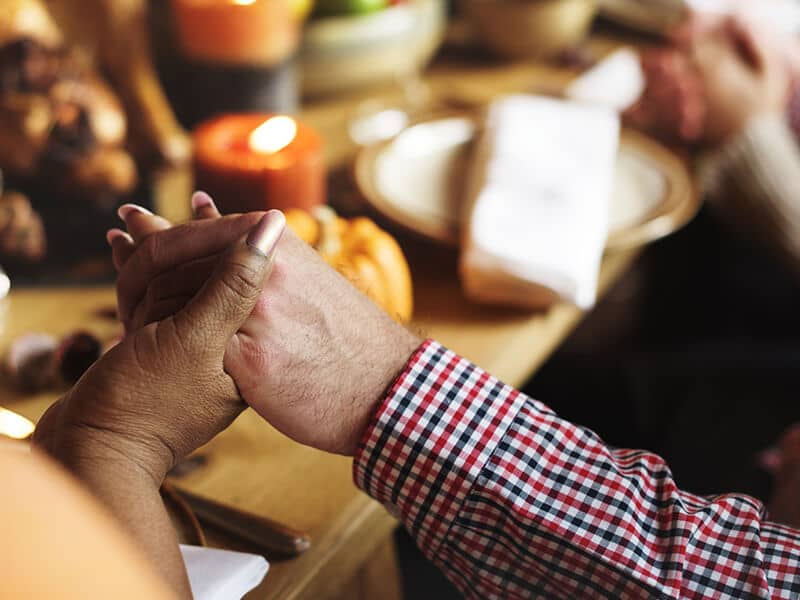 How Do You Wish Someone Happy Thanksgiving?
Here are some of the best ways to show your gratitude to the people in your life. Read next feature >