Been naughty this year? Krampus is coming.

He sees you when you're sleepin'

He knows when you're a wake

He knows if you've been bad or good

So be good for goodness sake

The words to the song, “Santa Claus Is Coming to Town” are innocuous enough when they refer to the jolly old elf, bringer of gifts and Christmas merriment.

But what if those words applied to something sinister, throwing the once-familiar song into an ominous minor key? What if, instead of hearing a hearty laugh from the chimney this Christmas, the echoing sound of cloven hooves and rattling chains issues forth?

Watch out. That’s not Santa. It’s his horned helper, Krampus. And if you've been bad, he's here for you.

Descended from Norse mythology, this terrifying creature, according to folklore, is said to stalk the night alongside jolly old St. Nicholas, punishing those children who have been especially naughty during the the year.

The Legend of Krampus is part of a centuries-old Christmas tradition in Europe, and particularly in Germany, but celebrations involving the creature are making their way all around the word—Krampus is coming to town.

So in case you find yourself face-to-face with Krampus this Christmas, let’s consider these 6 terrifying facts about Santa’s horned helper.

So why would the rosy-cheeked St. Nick travel alongside a horned, hairy, child-beating half-devil?

To do the dirty work, of course! Santa’s got to keep those white gloves clean, you know.

Unlike his American counterpart, the European Saint Nicholas concerns himself only with the good children. Krampus handles the rest. According to myth, where St. Nicholas rewards good children with sweets, Krampus doles out punishments to the wicked through whippings with horsehair and bundles of birch sticks.

Doesn’t sound so merry, does it?

Krampus represents, in a way, the balance between darkness and light, providing harmony through the combination of his malevolence and Saint Nicholas’s benevolence. The pre-Christian pagan folklore from which Krampus arose often embraced the idea that this balance must always exist.

Krampus is the yin to Saint Nicholas’s yang—the two are interrelated and dependent on one another to get their job done. As long as there are wicked children, there will always be a Krampus.

He's the Son of Hel

He's the Son of Hel

In Norse mythology, the goddess, Hel, is ruler of the realm of the dead. The youngest child of the trickster god, Loki, she is a fearsome figure, her upper body that of a living woman, the lower half, that of a corpse. To her are sent a portion of the dead—those who died in disgrace, and those who were wicked in life.

Born in the realm of the dead, Krampus likely gained his sour disposition from the cold and desolate wasteland which surrounded him.

However, once a year, Krampus is able to leave the dead behind and travel out into the world of man to seek out wicked children.

Of course, that’s only one possibility for the development of the Krampus myth—the creature’s beginnings are, in fact, shrouded in mystery.

The image of a horned god, however, is prevalent throughout pagan folklore. In fact, one of the most impactful mythological figures in all of paganism is the Horned God, itself, from which Krampus may take its image.

He Shows Up on Krampusnacht

He Shows Up on Krampusnacht

So now that you know who Krampus is and what he does, you’re probably ready to board up the chimney around December 24th, right?

Krampus is traditionally said to appear on the 5th of December, on a day known as Krampusnacht, or Krampus Night. This is the eve of Nikolaustag, or St. Nicholas Day, when German children look outside to see if boot they left out the night before is filled with presents or switches.

On the night of the 5th, Krampus appears in the streets, sometimes accompanied by St. Nicholas, although sometimes by himself, as well. It is during this time that the creature visits homes, supplying coal and beating rods as his own dark version of Santa’s gifts.

So if December 5th is coming up and you haven’t had the best year, you’d best keep an eye on the streets. If you see a horned figure approaching, it’s time to hide!

In what is likely the most terrifying fact of all, Krampus doesn’t stop at merely giving bad children coal or whipping them with birch branches. He also abducts them. And takes them to hell. For a year.

There’s probably not anything more motivating to keep your hands out of the cookie jar than the threat of a big, hairy Krampus throwing you in a sack and carting you off to the underworld.

Interestingly, this aspect of the Krampus myth likely derived from times when the Moors raided European coasts, abducting people into slavery. These European slaves were acquired in slave raids on ships and coastal towns, and those unfortunate enough to be captured would often be used as galley slaves—a kind of hell in itself.

In the galley—a type of ship propelled by rowing—slaves would be forced to row for long periods of time with little nourishment, and would often die before being freed.

It is this cultural experience that later informed the development of the Krampus myth, making the creature even more terrifying.

He's the Subject of Celebrations

He's the Subject of Celebrations

Who would have thought that a monster that abducts and beats kids would be celebrated?

Yes—Krampus parties are a thing.

These celebrations, called Krampuslauf—Krampus Run—are quite wild. Customs vary by location, but the tradition is ancient, going back hundreds of years.

Imagine being relentlessly pursued by a bipedal, horned beast armed with a lash through the wintry snows.

In the evenings of November and December, in towns across Austria and Germany, you can find people—children and adults, alike—being intimidated and chased by people dressed as Krampus, often wielding torches and real instruments of torture that include whips.

And believe it or not, these whips are used on people, inflicting scratches and minor injuries. Participants are often said to come away thinking seriously on the evils they committed in the past year, promising not to commit them again in the future.

In what is a slightly more lighthearted Krampus fact, this horned creature has been featured on Christmas greetings cards called Krampuskarten since the 1800s.

These usually featured the phrase, “Gruß vom Krampus,” which translates to, “Greetings from the Krampus.”

Yes. People in the 1800s sent each other merry little Krampus cards.

Traditionally, these cards would have funny poems and rhymes beneath an image of Krampus looming menacingly, abducting children, or lolling his terrifyingly long tongue out.

Contemporary Krampus cards veer more toward the cute—Krampus is depicted as a sweeter, Cupid-like creature. But the older versions? Well, they’re terrifying, to say the least, showing Krampus as a grotesque, goat-haired, humanoid beast, doing what it does best—instilling terror and doling out pain.

In other cards, Krampus become decidedly even more creepy as he lusts after various women, who seem to be just fine with the whole situation, judging by their serene faces. Unfortunately, this aspect of Krampus has found its way into the Krampuslauf, where drunken men in costume frequently harass their town’s young women.

Today, you can find the vintage version of these cards on most auction sites. If you can handle the creepiness, that is.

Although Krampus is a myth—albeit a terribly frightening one—the reminder to reflect on your own behavior is a useful one. Krampus and Saint Nicholas hold up a mirror, showing us the potential good, and the potential darkness that lies within each of us.

But this December, make sure the good outweighs the bad. Otherwise, you might just be hearing the sound of chain and hoof on the 5th! 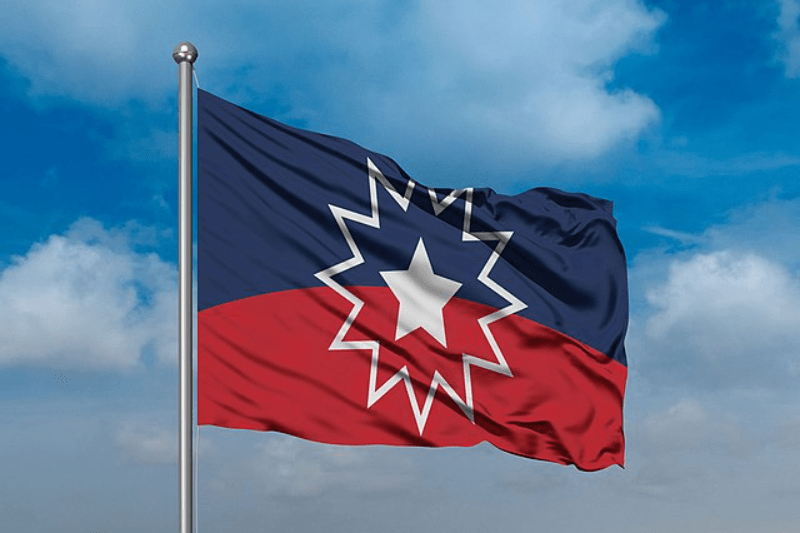 10 Facts About Juneteenth You May Not Know
Juneteenth is another American Independence Day. Read next feature >
Wesley Baines is a graduate student at Regent University's School of Divinity, and a freelance writer working in the fields of spirituality, self-help, and religion. He is also a former editor at Beliefnet.com. You can catch more of his work at www.wesleybaines.com.