Author Virginia Welch shares an excerpt from her book The Lesson - which is based on a true story. 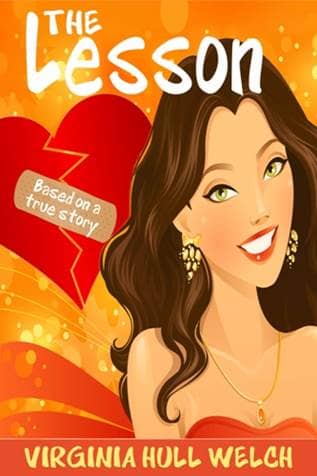 “I didn’t join the Navy to spend my time polishing things.”

“Or painting things. You know, if it moves, salute it. If it doesn’t move, paint it. And when we weren’t polishing something brass or repainting something gray or mopping salt water off the deck for the umpteenth time, we had to hose each other down—but not often enough to make the Navy a worthwhile career.”

Kevin pushed his empty plate to the center of the table near hers. “Race riot. When I first got to Midway there was a race riot. It was the most exciting thing I ever got to do with the fire department, much more adrenaline involved than stamping out brush fires. Ride on the back of the truck, blasting people with high-power hoses. It was great fun.”

“Both. I was an equal-opportunity hoser.”

Gina privately marveled that anyone could speak so casually about race, riots, and hoses in the same breath, and worse, enjoy it. She and her sisters may have pulled hair and slapped faces from time to time as children, but proper young ladies did not make jokes about uncivilized behavior and they certainly never enjoyed it.

Or at least they didn’t admit it.

“Which means what?” Gina hated looking ignorant, but she felt comfortable asking questions of Kevin because he answered simply and naturally. The sense of embarrassment she felt when he first entered her apartment was ebbing away, replaced by easy rapport. It helped that he seemed delighted to answer her questions about the Navy.

“It means I’m the guy they call when the commanding officer’s head quits working.”

Gina screwed up her face.

“Oh.” Gina laughed. She wasn’t used to a guy who so easily made fun of himself. What kind of protocol did it demand? “And second class? That doesn’t sound too good.”

“It’s not like it sounds. It’s a very important role in the Navy. Very critical to ship operations. It means petty officer second class. It’s a rank somewhere between rear admiral and seaman.”

His grin told her he was teasing again, but she didn’t want him to know exactly how ignorant she was of Navy ranks, so she asked nothing more. Gina's father was retired Army, but he had left the military when she was in second grade. She had paid no attention to such matters since then.

“My dad’s place is only about two and a half miles from here,” he said, suddenly brightening. “That’s where I stay on weekends.”

“You don’t stay at Mare Island, on the ship?”

“I do, five days a week. Sometimes the ship ties up in Vallejo, at Concord Naval Weapons Station, and I stay there too. But a ship is dreary enough five nights a week. I sleep there seven nights only if I have to, like when we’re out to sea. I like my shipmates okay, but not enough to want to spend every weekend with them. Besides,” and he winked again, “the girls are on shore.”

Gina smiled and looked down at her hands but said nothing. Kevin was too much. Santa Clara guys were just as forward, but they had beer for an excuse. Kevin was as sober as a final exam, which meant he had staying power. She didn’t want to encourage any such banter, partly because they were alone in her apartment, but mostly because Kevin, sweet boy as he was, was not the kind to make Gina’s heart flutter. The worst thing she could do was encourage him.

“On weekends I stay with my dad. His place is on Boston Avenue, just a few minutes from here. I doubt if it’s even three miles.”

He said this a little too jauntily. Until this moment, Gina had been comfortable with the situation, because she figured that tonight’s rendezvous was an aberration. His ship was docked seventy-five miles away at Mare Island Naval Shipyard—a safe distance. And the Menzies’ Wednesday evening Bible study in Cupertino was such a long drive from her Santa Clara apartment that, with her full schedule of classes and part-time job, she wasn’t certain she wanted to continue making the weekly trip. Likely they would never see each other again at the Bible study. Now it was obvious to her that he thought it just super that her apartment was only minutes from his dad’s place. She was disturbed. Not only did he know where she lived, but on weekends he would be close by.

It seemed a good time to call it an evening. Gina intentionally looked down at her watch. One-thirty. She was amazed that they had been sitting in her kitchen talking and telling jokes for three hours. Time had flown.

“I have an eight o’clock class, Kevin,” she said.

He looked down at the doorknob as she showed him the door. “Who else has a key to your apartment?” he said.

What a nervy guy. Nice but nervy. He had followed her all the way home from Cupertino, he was a shameless flirt, he didn’t know how to dress, and now, with no attempt at discretion, he was prying. They’d had a nice visit, he was sweet, and he certainly told funny stories and corny jokes, but she shouldn’t have let him into her apartment. It sent the wrong message. What’s more, it was late and she was tired.

Virginia (Ginny) Welch has contributed to a variety of publications since acquiring an MA in Communications from California State University. She is a full-time writer and editor. The Lesson is her first novel. She lives in Virginia. For more information on The Lesson click here.