Do Career Women without Children Wear the ‘Scarlet Letter’?

There is a new discrimination in the workplace against women. 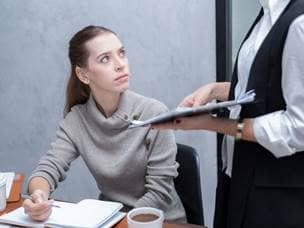 During World War I women entered the work force to help support the war. They took jobs in manufacturing plants and other industries, since men were off fighting. Rights in the workplace remained non-existent until John F. Kennedy signed the Equal pay Act in 1963 and the Civil Rights Act of 1964 signed. Women are still fighting their way towards respect today.

Women are still working for equal pay for doing the same jobs, and they are now combating unbalances when it comes to not having kids. Today it is not only about equal pay. This discrimination is against those who do not have children in the workplace.

When people have to attend something related to their kids, they are excused, or effortlessly get out of work since their kids are sick. Somehow there is a stigma that if you’re single or don’t have children, you have more time than parents do—and can’t miss work. People that don’t have kids have to balance work, life, health issues, husbands, bills, and take care of aging parents.

This leaves many single or childless employees having to step in and cover, creating resentment over time. Grant it, issues come up in life, moms and dads juggle a ton of things, but so do people without children—just in different ways.

All should be treated equally if per se, a person needs to leave early for blood work, wants to travel to see family, or has an emergency. There needs to be workplace limits on everyone, management consultant Alexis Grant wrote in a blog about work-life balance. Not all people are conscientious about company time and taking care of respective duties.

There are people who will take advantage of supervisors not willing to be more open minded to the game. Maybe you are asked to cover for someone on a weekend, since well, you have no kids. And the people with families need family time. If a kid is sick, they can work from home, but you better take paid time off. Margaret Wheeler Johnson wrote in the Huffington Post that there needs to be increased awareness to the unfair demand on single women at work.

Women need to speak up that they are not available all the time. There needs to be boundaries.

“We also need to be careful not to line the prescription "do less work" with the message to just make it look like you're doing less, which could mean hidden hours working at home and less sleep, and would only make employers think the women they're overloading can take on more,” Johnson explained.

We’ve come a long way from what the workplace used to be before the 1964. Everyone should have accessibility to time off, pay, and from being overworked because people decide to use kids as an excuse get out of responsibilities. I know a lot of working moms who are champions, who don’t take advantage, and shy away from responsibilities.  Not all career-women are treated that way, there are some great companies out there, but the issue needs to be taken seriously.