Remembering a man of great integrity, humor, love, and bravery. 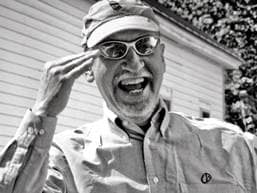 He founded Beliefnet with me in 1999, served as its president and was on the board until the company’s sale last year. A Vietnam veteran, Bob also founded "New England Monthly" magazine and was instrumental in launching Waterfront Media, a successful internet health company. Fortunately, he completed an extraordinary memoir which will be published by Random House this spring.

Bob was a lovely, honest, smart man with great integrity and heart. A soldier, husband, father, writer, publisher, and gifted businessman, I was so blessed to have had him as a partner and friend.

Beliefnet certainly would not exist if not for Bob’s work and wisdom.

Bob inspired us, and instructed us, in many ways.

He led by example. When we were first hitting financial hard times, it was Bob who volunteered not once but several times to cut his own pay. His philosophy was, "Do the right thing and, eventually, others will follow." It was at the heart of the strategy as Beliefnet filed for Chapter 11 (and later recovered).

Bob taught us that successful entrepreneurs have to do the big things, and the little things. He helped craft the overall strategy, and raised the money, but he also found the office space, bought the computers, etc. That’s the way small businesses get built, and it is the way leaders can help create a business culture that draws the best out of everyone.

He believed in what he was doing. His willingness to work his tail off was absolutely essential fuel, especially in the early days.

Bob’s judgment and instinct about good ideas was always remarkable, even when it was the conventional wisdom to scoff.

Bob also had a warm and witty eye for irony and a good sense of humor. My greatest memories are simply of us laughing together.

He valued honesty. One of the biggest surprises in my short career as a “small businessman” is how often people justify dishonesty on the grounds that it’s good for the business. Bob never did. He always seemed to take the posture that the point of the game is not winning but winning while playing by the rules.

He was a person of great strength. A heroic Vietnam vet, Bob was never intimidated by people with more money or bigger egos. Though often a diplomat, he never absorbed the idea (so common in this world) that people with money or power deserve undue respect just because of their position.

Beliefnet would not have launched, and survived, without him.

Of course on a personal level, Bob’s friendship is what mattered to me most.  I count the special bond we shared among one of the most important things in my life over the last decade. He was a great man, and a good man. And a great friend.