Have you ever thought about the odd jobs and tasks that work at home mom's have to deal with? It's safe to say that there is never a dull moment in their lives. 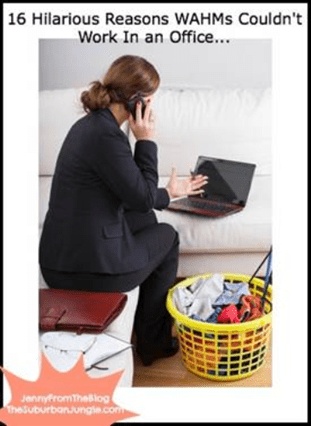 There are many things that can (and do) go on at the home office that just wouldn't fly in an actual office. For instance, I bet people who work in an office rarely have co-workers hiding under their desks or trying to lick them because they think it's funny. And I bet they never put their boob in someone's mouth at the office. Let me rephrase, in case you work in an office because I don't know what you do, but I hope it doesn't involve putting your boob in someone's mouth. Well, unless you're a wet nurse. Though if you were a wet nurse, I wouldn't imagine you wouldn't work in an office setting. I digress. My point is, many things wouldn't work and I have the proof right here:

Wear pajamas all day.  -- "I know there's a dress code, but these Paul Frank flannels pants are so darn comfy."

Stick your boob in someone's mouth. -- "Joan, you look hungry. Are you sure you don't just want to suckle at … That's odd, Joan hasn't talked to me all day."

Take business calls locked in the bathroom. -- "Excuse me Samantha could you refrain from flushing, I'm on a conference call. Great, thanks."

Constantly shush the people around you. --"Seriously guys, I have an important client on the other line, can you use your inside voices?"

Tell your coworkers they've had too much candy, fried food, caffeine for the day.  -- "Sorry, that was the last cup of coffee you can have Bob, you'll be up all night."

Go braless or pantless, or both.  -- "Well this is awkward."

Stop work to clean and kiss a coworkers boo boo. -- "Oh Phil you really stubbed that toe hard, huh? Let me kiss it make it better? Phil? Where are you going?

Have the Nickelodeon Channel running in the background. -- "Whoooooooo lives in a pineapple under the sea? Come on, everybody join in?"

Invite other people's kids to your office to occupy your co-workers. -- "Guys you seem kinda restless, so I thought I'd bring in a bunch of seven-year-olds to keep you busy."

Trip over Legos, Barbies, trucks … (unless you work at FAO Schwartz - then it's an occupational hazard)

Find a cat lying on your keyboard. -- "Well, that's weird, this cat was not here this morning."

Negotiate time on your computer with co-workers who would like to use it for Club Penguin. -- "Just 10 more minutes and I need it back. Yes, you can get a Puffle, hurry."

Walk around straightening everyone's desks and offices. -- "Seriously, you keep this place like a pigsty! How many times have I told you to take your dirty glasses to the sink? What are you doing an experiment in here?"

Try to solve issues with the boss, by suggesting a fun make believe game. -- "You seem upset that I botched the deal, I have such a good idea though, let's play Princesses! I'll be the Prince and you be the beautiful stepdaughter who is really a Princess, but doesn't know it because her evil stepmother has kept her locked in the castle. OK?"

Make everyone in the office an afternoon snack.  -- "Guys, I think we could all use a little protein and an afternoon pick me up! What say I whip together some crackers with peanut butter, maybe a smoothie, some fruit with a little sugar on top - just a little though."

Well, I guess it's a good thing WAHMs don't work in an office, because it could get pretty weird.

Jenny Isenman AKA Jenny From the Blog, is the humorist behind the award winning, The Suburban Jungle.com. Join her … and the INSANITY on Facebook , Pinterest, and Twitter.