Winston spent years dealing with guilt, frustrated over the children he wasn’t able to save during the Holocaust, until this moment. 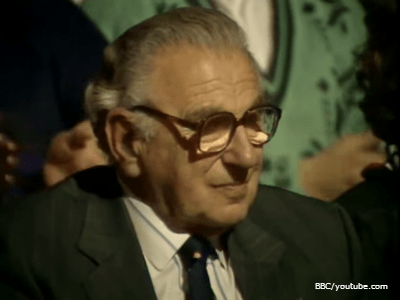 In December 1938, a stockbroker from Hampstead named Sir Nicholas Winston cancelled a holiday to go to Prague to see what was happening to refugees in that area. He didn’t know this decision would save hundreds of lives and impact his life forever.

Winston organized eight evacuations of the children on the Czech Kindertransport train. He found homes for 669 of these children in Britain, many of whose parents would die in Auschwitz. He continued the rescue mission until the last train was cancelled before World War II started in September 1939.

Winston spent years dealing with guilt, frustrated over the children he wasn’t able to save during the Holocaust. In 1988,his wife discovered a scrapbook filled with names and journals which documented the rescue operation. After she convinced him to go public with this powerful story, he appeared on the BBC show, That’s Life. Unbeknownst to Winston, producers of the show surrounded him with 80 of the people he saved from the Holocaust. Watch this touching moment of discovery unfold below. This year, Winston turned 105.