S. Truett Cathy, founder of Chick-fil-A, is proof that the greatest idea begins as a tiny nugget. 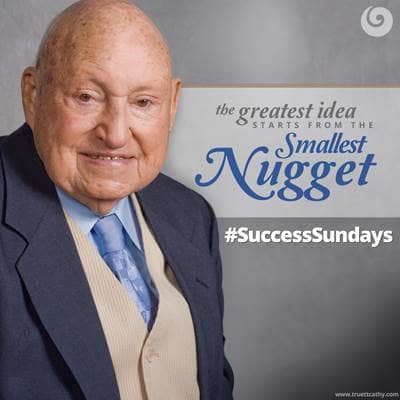 It’s not hard to believe that the Chick-fil-A empire evolved from the mind of a man who began a stand selling Coca-Cola when he was only 8 years old. S. Truett Cathy had a deeply ingrained work ethic, even in his youth. At just 14 years old, Cathy’s parents moved the destitute family into public housing, where young Truett delivered newspapers to earn money for the family. In 1935, during the Great Depression, the family’s struggles were not isolated, and these life experiences are said to be the foundation of the first business Truett ran with his brother, Ben, in 1946 - a restaurant in Atlanta, near their family.

The brothers expanded their restaurant to a second location in 1951 after a 5-year successful run with The Dwarf House Grill, but when the second location experienced a fire some years later, in rebuilding Truett saw an opportunity for a new style of eatery – fast food. With this same innovative idea also came the invention of the boneless breast of chicken sandwich, the “Chick-fil-A”.

Fast forward from 1960 to 2001, when the 1,000th Chick-fil-A location opened, Truett’s entrepreneurial spirit and recipe for success have become a proven business model, of which “Closed on Sundays” is a key component.