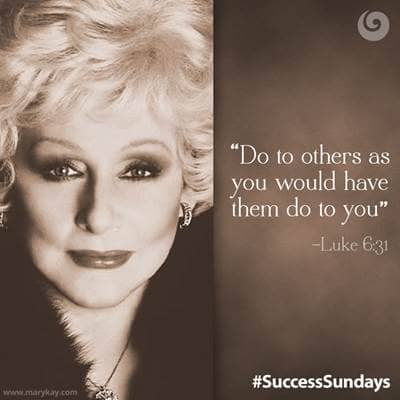 Mary Kay Ash married at age 17 and had three children, then worked to support her family during World War II. Upon her husband’s return from service, the marriage broke down, and she took a full-time job after the divorce.

After training a man on the job, then being passed over for a promotion that went to the same man she trained, she retired in frustration. With full support of her new husband, she began writing a manifesto, intended to be a book geared toward helping women excel in business. With a small investment from her son, Mary Kay Cosmetics was born, and based her founding principle on the Golden Rule, the “do unto others” philosophy. Her business philosophy, and slogan, became “God first, family second, career third”. After 17 years as a successful publicly-traded company, the Board and the family took back control and reverted to a privately-held company, and as of 2014, and posted wholesale sales of over $3 billion.