7 Quotes From C.S. Lewis About Christianity

C.S. Lewis’ legacy as an author and theologian is far-reaching and profound. His words transcend denominations and are applicable to all Christian life. Clive Staples Lewis was born in 1898 and died in 1963. He held academic positions in English literature at both Oxford University and Cambridge University. He wrote over 30 books which have been translated into more than 30 languages and have sold millions of copies. They continue to inspire well into the modern century.

Throughout his life, he inspired others to take a deeper look at their Christian lives through his teachings and written work. He is best known for his works of fiction, especially The Screwtape Letters, The Chronicles of Narnia, and The Space Trilogy, and for his non-fiction Christian apologetics, such as Mere Christianity, Miracles, and The Problem of Pain.

From a variety of Lewis’ works, these seven Christian quotes are worth storing away in your heart.

"A Christian is not a man who never goes wrong, but a man is enabled to repent and pick himself up and begin over again after each stumble--because the Christ-life is inside him, repairing him all the time."

Christians know from the Lord’s teachings that we will never be perfect. Given our human nature, we will fail frequently and break the rules of the Lord. Though Christians work hard to never sin, the truth is that we all will give into temptation. C.S. Lewis understood this, and knew that Christians would be alright because they could repent to Jesus Christ. Jesus is always working to restore us as God’s children.

"The voice of God indeed daily calls to us; calls to the world to abandon sins and seek the Kingdom of God wholeheartedly..."

Even for those who do not identify as Christian, God is calling on them to come home. C.S. Lewis understood that God is always trying to communicate with us, even when we don’t see it. God wants us to leave our sinful lives behind and accept Him into our hearts. The Lord is excited for us to find heaven one day, should we choose to accept His gift. Even when you feel that you aren’t hearing the voice of God in your own life; know that He is whispering in your ear. Sometimes, you need to pause and seek Him out.

“The Christian does not think God will love us because we are good, but that God will make us good because He loves us.”

Many Christians believe that if we do good works in the world then we will get accepted into heaven. This simply is not true. The only thing that will take us to heaven is our acceptance of Jesus Christ, and repenting our sins to Him. God doesn’t love us because we are good. God loves us even with the crazy sins and flaws that we have. When we accept God’s love, we are lifted up as Christians because His love for us is so incredibly strong.

“To have Faith in Christ means, of course, trying to do all that He says. There would be no sense in saying you trusted a person if you would not take his advice. Thus if you have really handed yourself over to Him, it must follow that you are trying to obey Him.”

C.S. Lewis understood that we could not build a real relationship with the Lord if we first did not learn how to trust Him. Christians must completely give their lives to Christ, and trust that God has a bigger plan for all of us. We might not know what that plan is, but we still have to follow God’s commandments. His advice should be taken above all else.

Christians can sometimes get a bit egotistical, and think that they are better than others because they don’t have “that bad” of sins or because they are Christians in the first place. The truth is, God doesn’t care and C.S. Lewis points that out. God sees all sins as being against Him, and does not rank them for how horrible they are. He also accepts that sins those who do not follow Him have made, because they are still His children. God excuses all those who ask to be excused. He forgives anyone that wants forgiveness in their heart. As Christians, we should do the same.

“God, who foresaw your tribulation, has specially armed you to go through it, not without pain but without stain.”

Suffering is a part of the human experience, and though it can hurt it will never be something that with God’s help you cannot handle. God knows the pain and trials you will go through in life, but has a purpose for this suffering. He isn’t trying to punish you and will still be by your side through it all. C.S. Lewis understood that God would always arm His children with the tools they needed to survive the evils of earth.

"God created things which had free will. That means creatures which can go wrong or right. Some people think they can imagine a creature which was free but had no possibility of going wrong, but I can't. If a thing is free to be good it's also free to be bad."

God created us to have free will to make any choices we wanted, both good and bad. Because of this, evil exists in the world. This was a part of God’s plan for our freedom. Some Christians get confused about the meaning of free will, but C.S. Lewis tried to explain. Without the terrible of evil, we also wouldn’t have the greatness of happiness, joy, and love. God designed life this way so that we could also have happiness.

C.S. Lewis has inspired Christian for centuries. He is truly one of the most celebrated writers in our time. His advice and intellect gives us opportunities to connect with God on a deeper level, and meditate on our relationship with Christianity. C. S. Lewis wrote many books about Christianity that can continue to inspire you. 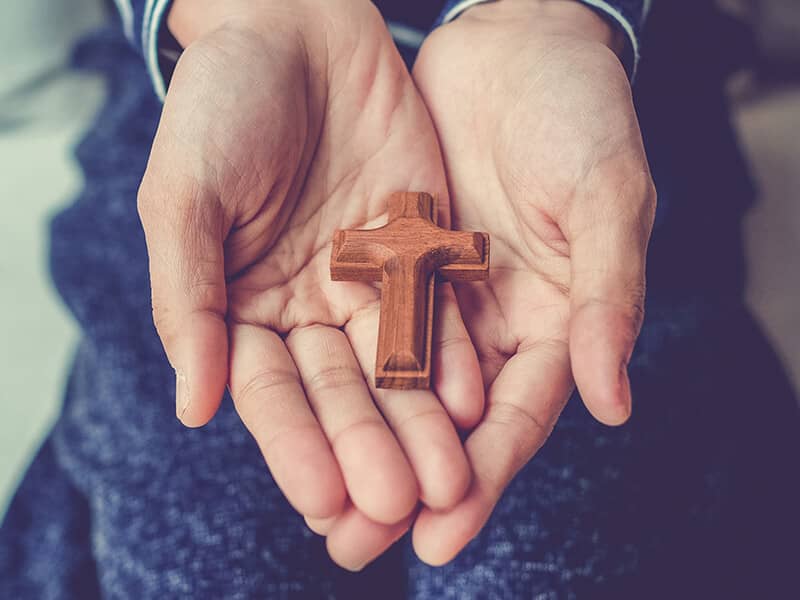 8 Bible Quotes That Will Change Your Outlook on Life
God is in control. Read next feature >
Megan Bailey is a former Social Media Specialist and Content Producer for Beliefnet. She attended James Madison University where she received a degree in psychology.