Passport Through Darkness: A True Story of Danger and Second Chances

Kimberly Smith was like most people, building a career and home for her family in Birmingham, Alabama in the late ‘90s. In the midst of being a busy mom, Kimberly and her husband Milton felt a tugging on their hearts to get involved in mission work. After wrestling with God, the Smiths left their jobs and sold their belongings to serve children exploited by human trafficking.

Beliefnet
The dirt streets and alleys are muddled with brokenness. Sickness engulfs make-shift homes, orphans strive to survive amidst war and hide from predators looking for a donation to human trafficking in Africa and Eastern Europe. It was a road that was lined with the sounds of poverty, human trafficking, and genocide far way from the shopping malls and frothy coffee drinks. Would you sell your home and quit your job for the forgotten? If you believe you can’t make a difference, read how one decision can send positive ripples to help alleviate human suffering.

Do you have any regrets about your trips into Sudan?

Zero. I have faced many hard things, and many dark days…and nights. As I God carried me through some of that darkness, I did cry out to Him, a lot. The hardest thing was to face some of the stupid things I did during those days--when everything seemed to be going wrong--I really questioned God if he was sure He had the right gal. The only answer I ever got was, “Not everything is going wrong. Children are alive today who would be dead or enslaved without this work…just keep going.” In time, I began to see the power of God working through my mess just as much as when I got it all “right,” It’s very humbling--and assuring--to see God deliver me, the situation, and others even when I mess up.

Has writing Passport Through Darkness further strengthened your marriage?

Powerfully so! When Milton suffered organ damage and could no longer travel to the field, I began to overprotect him. I had thoughts like, “He loves me so much and it is so hard for him to let me go to war zones without him by my side to protect me, is it really fair for me to come home and dump all my pain, fears, and mistakes on him?” I worried that the stress it would cause him would make him more sick; I also feared if he knew how tough it really was, he wouldn’t let me go any longer.” So instead of trusting God and my husband, I started hiding a lot of my experiences, walling big parts of myself off from him. Of course, this caused a huge cavern in my marriage. But, even in my fear and mishandling of things, God didn’t give up on me! He kept using me, and pushing me to get real. To trust Him, and the man He’d given me. Just because our roles were shifting didn’t mean I was on my own…but it felt that way for a long time. As God showed me His love for me even as I messed up, I remembered the work I did wasn’t my mission, but God’s. It helped me to see my place under God rather than being ultimately responsible for the success of the mission. My work was to simply be faithful with what He gave me.

How did your children respond to your trips to Africa and Europe?

At first it sort of felt surreal. “Mom’s going to work in a war zone with active genocide and slave raiders?” They were proud, scared, excited--and yet, it didn’t quite seem real. As I would return home and tell the many heartbreaking stories, it broke their hearts and transformed their lives. Two of them work fulltime with our mission organization Make Way Partners. Others volunteer and sponsor orphans.

Can you tell us more about your family?

Milton and I have been married for more than 20 years now, but we were both married before. We each brought three young children into the marriage. Early on, we resembled Barnum and Bailey circus--complete with backyard brawls—more than we did the Brady Bunch. All eight of us came into our new family with our fair share of pain and baggage, certainly enough to keep us from ever really gelling. But knowing the pain of divorce, Milton and I were both determined to find healing, forgiveness, and restoration. The work paid off not just for our marriage, but for our children. All our children are adults now and most of them are so close-sharing each other’s story--that they call themselves The Tribe.

Can you tell us about Make Way Partners ongoing and future projects in Africa and Eastern Europe? 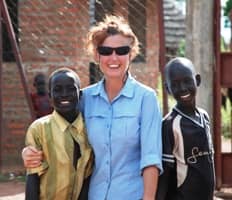 In Sudan, we have expanded beyond Darfur, which is much of where Passport is set, to Southern Sudan, down near the border of Uganda. We’ve already opened the first phase of that new orphanage and have saved our first 50 children! Now, we are building the second phase; eventually, we’ll house and care for an additional 500-plus orphans, just like we do in Darfur. We lead multiple short-term teams each year to both of these sites. We have another orphanage in Congo, in the worst region for slave raiders and mass rape--Goma. There we have a small orphanage of about 50, but are actively seeking land on which to build a much larger one. My daughter and son-in-law are about to move to Congo to serve under our indigenous director as we grow! In Eastern Europe, we have the only shelter for survivors of trafficking in all of Romania. The demands there are enormous, being the only shelter, and our indigenous director needs much help. She not only does many rescues, but also manages the daily shelter needs. We are currently looking for missionaries to serve under our indigenous director in Romania.

Is there anything else you would like to say?

Don’t compare yourself to others…especially people you may tend to hero-ize. Instead ask God, “What dream did you hold for me as you first knit me in my mother’s womb?” Then, wait until you hear…and step into that dream…that life. Nothing you will lose will compare to what you gain, for your Father’s Dream for you is far more beautiful than the American Dream.

Read Kimberly’s encounters in her book, Passport Through Darkness: A True Story of Danger and Second Chances, and make sure to check out Make Way Partners' ministry.