His mother shared the heartbreaking final moments of her 4-year-old’s battle with cancer.

Just a heads up. You’re going to need tissues for this one.

Nolan Scully was diagnosed with rhabdomyosarcoma – a rate soft tissue cancer when he was only 3 years old. As his battle reach its end, the 4-year-old didn’t harp on death but emphasized his faith. Knowing that he would soon pass, he told his mom he’d just wait for her in Heaven.

When he was diagnosed with cancer, his family started a facebook page that tracked the ups and downs of his journey. Thousands of people were drawn not only to his story, but the boy’s amazing big spirit.

ust from looking at his pictures, you could see that he was full of life.

“Every battle he’s had, he just bounced back, unbelievably,” said family friend Mark Bell. “You knocked him down, he just came back and ran.”

Nolan had dreams of serving the community like his dad Jonathan who was firefighter. His father stepped down once his son was diagnosed with cancer.

He also wanted to become a police officer. During his hospital stay, the city’s Police Commissioner made Nolan’s dream come true, swearing him in as an honorary police officer. On this special day he became Sgt. Rollin’ Nolan.

There were so many people praying for Nolan, not only family and friends, but also strangers. Nolan’s mom will never forget the heartbreaking day that the end was near.

“We were sat down with his entire team. When his Oncologist spoke, I saw the pure pain in her eyes. She had always been honest with us and fought alongside of us the whole time. But his updated CT scan showed large tumors that grew compressing his bronchial tubes and heart within four weeks of his open chest surgery. The Mestatic Alveolar Rhabdomyosarcoma was spreading like wild fire. She explained at this time she didn’t feel his Cancer was treatable as it had become resistant to all treatment options we had tried and the plan would be to keep him comfortable as he was deteriorating rapidly.”

It was extremely difficult for the family to process this news. Nolan’s mom had to gather the strength to tell Nolan. However, his reaction showed how strong his faith really was. When his mother told him of what was to come, Nolan had no fear of death. He even told her he’d wait in Heaven for her.

His mother shared one of the conversations she shared with her son in the final days leading up to his passing:

Mom: Poot, it hurts to breathe doesn’t it?

Mom: You’re in a lot of pain aren’t you baby?

Mom: Poot, this Cancer stuff sucks. You don’t have to fight anymore.

Mom:: No Poot!! Is that what you have been doing?? Fighting for Mommy??

Nolan: To keep me SAFE! (With a big grin)

Mom: Honey … I can’t do that anymore here. The only way I can keep you safe is in Heaven. (My heart shattering)

Nolan: Sooooo I’ll just go to Heaven and play until you get there! You’ll come right?

Mom: Absolutely!! You can’t get rid of Mommy that easy!!

Nolan: Thank you Mommy!!! I’ll go play with Hunter and Brylee and Henry!!”

Nolan and his family spent Nolan’s final days living life to the fullest, enjoying the little time he had left. The 4-year-old loved having his mom right beside him so he could see her and hug her. On the final day of his life, she was given permission to take a quick shower. Shortly after she closed the bathroom door, Nolan shut his eyes and went into a deep sleep, beginning the end of life passing, Ruth said.

When she did make it out of the shower, Nolan was surrounded by his entire medical team. When she had gone to shower, Nolan had slipped into a coma and his lungs had collapsed.

“I ran and jumped into bed with him and put my hand on the right side of his face. Then a miracle that I will never forget happened. My angel took a breath, opened his eyes, smiled at me and said ‘I Love You Mommy,’ turned his head towards me at 11:54 pm Sgt. Rollin Nolan Scully passed away as I was singing ‘You are My Sunshine’ in his ear.”

When his mother shared the memory online, she included the following side by side photo of the bathroom floor. Nolan used to love to lay on the bathmat outside the shower.

While it is difficult for the family to still process the loss of sweet Nolan, they knew that Nolan was a young child of great faith. He knew that Jesus paid for us all so his goodbye was only a temporary one. This continues to give them comfort. 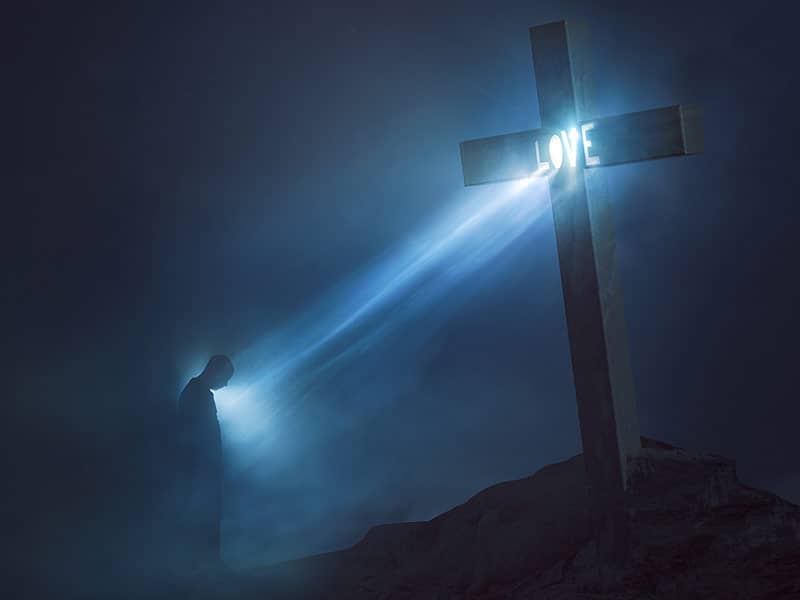 more from beliefnet and our partners
Add some inspiration to your inbox.
Sign up for Beliefnet's Inspiration newsletter.
From time to time you will also receive Special Offers from our partners
Lesli White