In his 2005 Commencement speech at Stanford University’s graduation, Steve Jobs recounted three stories from his life that will inspire you to follow your dreams and live up to your full potential. 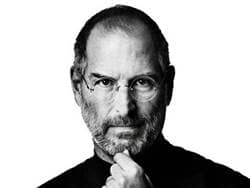 Jobs’ first story is about piecing together all of life’s seemingly random occurrences. He was put up for adoption at birth, but his biological parents wanted to ensure that he would be adopted by college graduates. The parents that had been arranged decided at the last minute that they wanted a girl instead, so Steve unexpectedly adopted by a woman who had never graduated from college her husband who had never finished high school. The two adoptive parents did eventually send him to Reed College in order to please his biological parents. However, Jobs dropped out of school after only six months of enrollment. He knew that college was not going to help him decide what he really wanted to do with his life, and tuition was becoming too expensive for his working-class parents to afford in spite of their hard work.

While dropping out of college may seem like a decision that would be accompanied by a general lack of motivation, the opposite was true for Jobs. He began dropping in on classes that interested him, rather than the ones he was required to take. While he had to spend most nights sleeping on friends’ couches and walking miles to the local Hare Krishna temple for a good free meal, he was confident that he was now pursuing what he was truly passionate about. One class that he dropped in on was a calligraphy course that was widely recognized as one of the best in the country. The insights gained from that course, a course which he never would have taken in his “regular” academic career, led to the Macintosh computer’s vast array of typefaces that have led to the aesthetic variety available today on all computers.

In his speech, he says specifically, “You can’t connect the dots looking forward; you can only connect them looking backwards. So you have to trust that the dots will somehow connect in your future. You have to trust in something: your gut, destiny, life, kharma, whatever. Because believing that the dots will connect down the road will give you the confidence to follow your heart, even when it leads you off the well-worn path. And that will make all the difference.”

After discussing the importance of trusting your instincts and believing that life will work out in ways you can’t always understand, Jobs turns to a lesson on dealing with loss. When he was 20 years old, Steve Jobs started Apple Computers with his good friend Steve Wozniak. When he was 30 years old, he was kicked out of Apple Computers due to business disagreements. Essentially, he had instantaneously saw 10 years of passionate, dedicated work disappear before his eyes. This hit him hard, but he was most disappointed in himself because he felt that he had let down a generation of entrepreneurs that had looked up to him. However, Jobs quickly realized that although he had lost his company, he had not lost his passion for innovation and computers. So, he got back to work.

Similar to how he was able to drop in on classes he found interesting after dropping out of school, Jobs used this period of being let go from his company to pursue his interests in new and exciting ways. As he put it, “the heaviness of being successful was replaced by the lightness of being a beginner again.” Over the next five years, he started two companies (Next and Pixar) and fell in life with his wife. In a miraculous turn of events, Apple even ended up purchasing Next and Steve was right back in with his original company. From these experiences, Jobs concluded that you must always continue to push through adversity. When it seemed like all was lost, he turned his negative circumstances around by relentlessly following his passions and ended up becoming even more successful that he’d originally imagined.

Steve Jobs’ death on October 5, 2011 came as a surprise to the world. Despite the widespread shock both from the media and in everyday conversation, Jobs himself had never lived in ignorance of this inevitable part of life. Even at the time of this commencement address in 2005, he explained that every day he would ask himself, “if today were the last day of my life, would I want to do what I am about to do today?” He was always conscious of the fact that we all have only a finite amount of time here on earth. While many people may view death as something to brush aside and not give a second thought, Jobs had a different understanding. Put simply, Steve Jobs saw death as “life’s change agent.” The knowledge that death is coming at some point or another should give us all the motivation and freedom we need to pursue what we truly love and live without inhibition.

This view likely came as a result of his diagnosis of pancreatic cancer in 2004. He was told that he had 3-6 months to live, and that he needed to tie up all the loose ends of his life. However, his doctors discovered that he had a rare form of cancer that could be operated on safely. At the time of this speech, the cancer had become a non-issue in Jobs’ life. Even still, he spoke about everyone having only a limited amount of time, and advised not to spend that time living someone else’s life. Death is liberating, rather than depressing, and essentially requires us to get on living the best and truest way possible while we still can.

To sum up the three stories, Steve Jobs told us that although we can’t always see how our actions will be rewarded in the future, we need to believe that the dots will eventually connect in our favor if we keep at it. He encouraged us to move forward in life, no matter the setbacks, and to do it quickly and honestly because we are all finite, but all capable of achieving anything we can imagine.