Bill Cosby Is Glad He Was Born, and So Are We

Beliefnet sits down with the charismatic comedian for a life lesson in Twitter, beating the odds, and above all else, thankfulness. 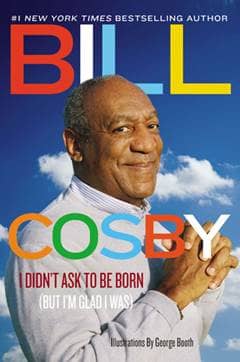 Bill Cosby’s latest book, I Didn’t Ask to Be Born (But I’m Glad I Was) is typical Cosby, which is to say, a very atypical book. Told in short memorable bursts, it’s an easy read with something for everyone. He moves from stories of the Bible, to the awkwardness of erectile dysfunction ads in a way that only a true doctor of comedy can. The book is filled with curiously located QR Codes that link to clever videos of Cosby opining on subjects related to the surrounding pages. It’s a unique presentation from a man so passionate about helping young people, he’s willing to embrace any and all technology.

Beliefnet: You seem to really get in to technology? Is that something strategic on your part?

Cosby: It’s business, if you don’t do it, you sit with the prehistoric animals. I’m old, not dead. Social networking helps reach people easier and quicker. People can make a choice right there.

Beliefnet: You are very active on Twitter. What do you think about how it has changed communication?

Cosby: I love Twitter, but some people use profanity so much that at some point it’s like saying, “pass the salt.” When I was a kid, there was a time when profanity became a part of the slang and punctuation. It was a light sprinkling of spice. However, there was that part of you that knew there were certain people you wouldn’t say it around, women, elders, children, but that’s not the case in social media. I remember being in the car with my daughter and she was maybe 4 and on the radio station they were playing James Brown and he says, “Good God” and she repeated it. Kids don’t know stuff is bad and they see too much of it. Kids need to remember that when you put something on Twitter, it’s not like whispering to your friend, you’ve put it on a billboard that the whole world, including your own kids someday, can see.

Beliefnet: You seem to be at your best when talking about family issues, is this book more comedy or parenting/life lessons? As an author, how do you approach writing?

Cosby: Listen young man, in September of 1960, I was blessed, and I’m not saying blessed in the every day religious way, when Temple University accepted me after scoring 500 on the SAT. I was 23 years old and they put me in remedial, I was the happiest remedial person on earth. The teacher gave us an assignment, it was the first time I ever put an effort into anything, I turned it in on time, again for the first time ever. When he passed out the papers, he did not return mine, he read it out loud. It was about pulling my tooth when I was 6, it made me so happy to have done something someone else was proud of. “Procrastination (the Perfect Point)” was my second paper and I wrote about how hard it was to write the paper, because, the second I wrote something down, it was no longer perfect, as long as I did nothing, it remained flawless. That was the beginning of my career. My inspiration was just to know that I could connect with people. Later when I read Mark Twain essays, I realized that he was not trying to show off, he was hilarious and a great American writer. I thought to myself, “I can do that.”

Beliefnet: In the author notes you refer to your youth and say, “I was pitiful” what do you mean by that?

Cosby: I managed my life to the point that at age 19 I was still in high school. I decided I was too old to be walking down those hallways. When all my peers graduated and went to college or got married, I was left with nothing in the neighborhood so I joined the Navy. I did not manage my life well at all. I was not arrogant, just pitiful.

Beliefnet: Is that why you are so passionate about helping young people?

Cosby: When I decided that I wanted to go to college, I wanted to be a school teacher for 7th and 8th grade boys because I felt that was an important time for them. I had gone astray at that point in my life and really wanted to help keep them from making the same mistake I had made.

Beliefnet: You say you picture hell as a place with a lot of laughing but nobody is having fun, what do you mean by that?

Cosby: You can hear the laughter but there’s nothing funny. When you don’t understand something, you often laugh. It’s not fun, it’s awkward, it makes you feel terrible, “are these people laughing at me?” To me, that is hell.

Beliefnet: You have a long section in the book about the Bible called “Missing Pages?” It’s humorous but addresses some real issues, how do you resolve those missing pages in the Bible?

Cosby: I have to respect the faithful, I have to respect that you believe something, I’m not here to challenge you on that but if I can connect with you and you can say, “yeah, I did wonder about that…” then it makes us all better. Faith, in many ways, is what fills in those missing pages. I don’t understand women, they can unload on you some stuff that has nothing to do with fact, “because I said so, that’s why!” talk about faith! They got that from Eve.

Beliefnet: You are often attributed to the quote, “I don’t know the key to success but the key to failure is trying to please everybody.” Was that really---?

Cosby: That is not my quote! I saw it on the wall of a tennis pro’s office, it was on a plaque. I do love that quote though, it’s so true. I often try to tell kids to think about all the people who love you, don’t cry over the one person who doesn’t. Kids need to focus on the people who support them, we can’t ruin the privilege of God putting us the earth by focusing on the few people who don’t get us.

Beliefnet: What inspires you?

Cosby: In my writing, to have an idea, be able to put it on paper and have it get out to people and hopefully have it be applicable to their lives. Being a teacher.

Beliefnet: What’s next for Bill Cosby?

Cosby: Leonard Part 7 [laughs] either that or I’ll just keep doing what I’m doing as long as the good Lord allows. CLICK to Continue to: How well do you know these great TV dads?