How A Little Red Wagon Is Changing the World

Check out our interview with the incredible young philanthropist Zach Bonner! 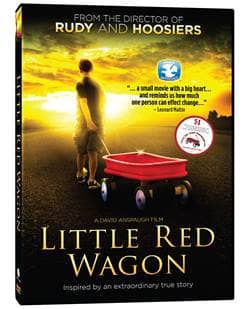 15 year-old Zach Bonner has lived an incredible life. At the age of seven he began handing out backpacks to needy children in Florida. Now after numerous walks to raise awareness his Little Red Wagon Foundation has become a nationally known organization. Helping with that is the movie Little Red Wagon, which recently arrived on DVD and is available exclusively at Wal-Mart. I got the chance to check up with Zach to discuss the movie, his incredible work, and what he hopes to do in the future.

It’s been crazy, seeing it, but it’s really been an exciting opportunity at the same time. When they first approached us about doing the movie, about 6 years ago now, the reason that we agreed to do it was because we saw the potential to really bring a lot of awareness to what we do. That’s really what it’s about for us and we’ve been really successful at being able to do that with the movie. We thought doing a Hollywood feature film it would really be able to touch a lot more people than through other avenues. It’s been really amazing to work with the people that we’ve gotten to work with on the movie. Our director David Anspaugh directed Rudy and Hoosiers, our screenwriter Patrick Duncan wrote the screenplay for Mr. Holland’s Opus and Courage Under Fire, and one of our executive producers did all of the Twilight films, so really big names from Hollywood came together for this movie. What was amazing about that was that they all did it for a fraction of what they normally charge just because they really believed in the mission.

How involved were you with the making of the movie?

We were involved throughout the entire process. What happened around the time they were shooting it was we were on the march across America so it was harder to go on set and do things like that, but we were constantly a part of the movie. We were on set for about a week. We had input in writing the script, you know saying how close it was. They did an amazing job relaying the story and that’s all we could really ask for.

What drives you do the things that you do with your life?

I would probably say the kids. Really I started because I started learning about them and it really motivates me to keep it going and to want to help them. Every time I hear one of their stories or I meet one of them or I hear a statistic it makes me want to do even more to help more kids.

Is there one particular story that has stuck with you?

There’s so many! Early on when we were developing the backpack program we put in a food pack, a first aid kit, a candy pack, and small toy. It was really early on and we were at the stage where we were trying to fine tune the backpack a bit because we figured out what works and what doesn’t. We were trying to do determine if the small toy was really that important. I’d always thought it was important but we just weren’t sure. So we were working with another national organization and they were distributing the backpacks for us. We had gotten feedback from them about this boy named Chris. They had been doing outreach one night and they had these backpacks. They were on the street and they gave him one. It was really late and he hadn’t eaten all day. He opened up the backpack and looked through the food, the personal hygiene products, she said he was happy but it was just the basic supplies. When he got to the candy pack and the small toy she said his face just lit up and they said that in the six months they had been working with him that was the first time they had seen him smile. He said that it was the first time for as long as he could remember that someone had gotten him something like that. Someone had approached him as a kid not just as a statistic or a case. It was at that moment that I knew the extra stuff we put in the backpack was really important, and our backpack program was here to stay.

Who are your heroes?

I really admire people like Elton John and President Clinton because they’ve used their power and their wealth to really help people. I really admire that. I think though that every day it’s the kids that really inspire me. These kids are really incredible kids and a lot of them have really amazing talents. We met one boy on the walk and he was an amazing artist with newspaper. He would take newspaper and he would do amazing things. People would have him do dresses, he was just incredibly talented. There are a lot of kids out there that are like that, that have a lot of talent and unfortunately something has happened and it’s caused them to be on the street. The kids inspired me at the beginning and continue to inspire me every day.

What are your plans for the foundation and for the rest of your life?

I definitely want to be able to grow the foundation, be able to help even more kids. We’re actually in the process of developing a youth resource center in Florida where kids can come and get food to eat, get clothes, use computers, basic services like that. We’re really excited about that because it’s also kind of a stepping stone into other programs in the community, more long-term programs. We’re really excited that, that’s something we’ve been wanting to do for quite awhile now and it’s finally getting to the point where it’s going to happen. Personally, I want to go into law, I think I can tie it in with the foundation and use it as another way to help people as a public service.

What would you tell people who are interested in giving back?

My advice would be to find whatever you’re passionate about. Whether it’s homeless kids, whether it’s animals, whether it’s the environment, whatever it is. Find out what you’re passionate about, and once you find that passion don’t let it go. Use the skills that you have in order to help that problem or cause. Like homeless children, reach out to a local shelter and find out what their greatest needs are locally because they do kind of differ. Find out what their greatest needs are and then find out how you can use your skills and your resources to help fill that need. Whether it’s doing a canned food drive or just volunteering, whatever it is just find out what you can do and do it. Once you find that passion don’t ever let it go.