The Beauty of the Via Dolorosa

Come walk the historic Via Dolorosa in Jerusalem, the "Way of Sorrows" traveled by Jesus on His way to Calvary. View it through the eyes of the great art masters ... and a few forgotten artists whose work still inspire us today. 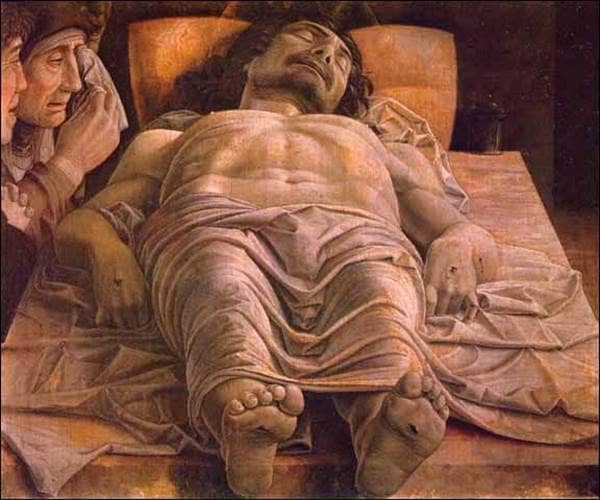 As seen by the great artists

What is the Via Dolorosa? You've seen the Stations of the Cross in every Catholic Church you've ever visited. But what are they all about? Sometime around the 15th Century, a tradition developed in which believers - particularly on Good Friday - would retrace the steps that Christ took to Calvary.

If you visit Jerusalem today, 14 stations are marked along the "Via Dolorosa," Latin for "Way of Grief" or "Route of Suffering." Let's take a walk down the Via Dolorosa through the eyes of such great artists as Michaelangelo, Van Dyck, El Greco, Mantegna, Caravaggio and several whose names history has forgotten, but whose masterpieces still inspire us today.

The artwork above is Station 14: Lamentation Over the Dead Christ (1490) by Andrea Mantegna (1431-1506) on display today in Milan, Italy at the Panacoteca di Brera museum 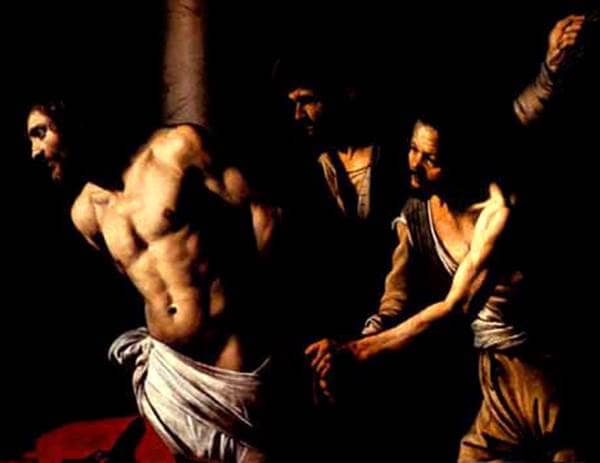 Jesus is Condemned to Death

Station 1: Jesus is Condemned to Death. We all know the story of how Jesus was tried so unfairly -- but before he was presented to Herod and then Pontius Pilate, he was mocked, reviled, brutally beaten and given a faded purple robe, a crown of thorns and a reed as a royal scepter. In this painting by the great artist Caravaggio (1571-1610), whose full name was Michelangelo Merisi da Caravaggio, Jesus is about to be scourged, His back torn by the Roman lashes. 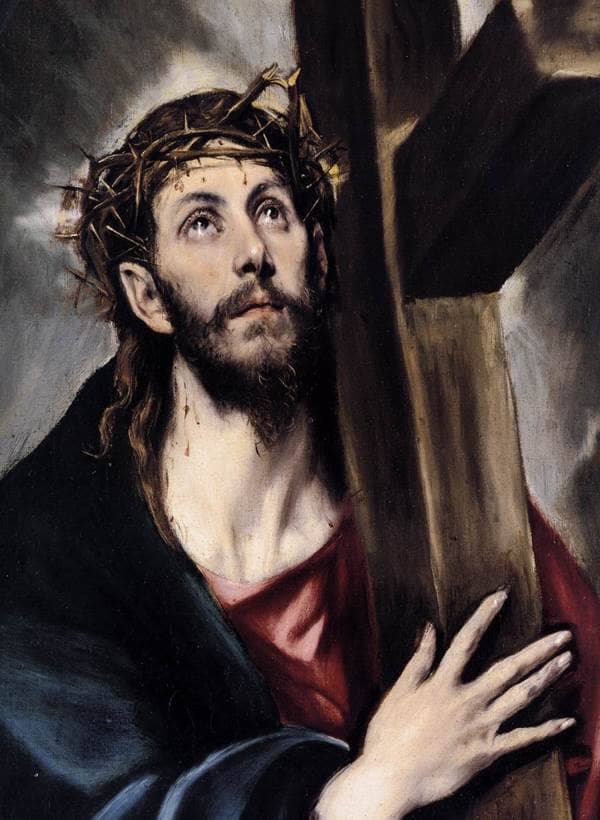 Jesus is given His cross

Station 2: Jesus is given His cross. Jesus was mocked by Herod, rejected by the crowd demanding the release of a murderer, Barabbas, then condemned to die by Pontius Pilate. He was made to drag a rough wooden cross through the streets of Jerusalem. Only a week before, the crowds had rejoiced and hailed Him as the Messiah during His "Triumphal Entry," throwing down their coats and palm branches before Him. This classic artwork, "Christ Carrying the Cross," was painted in 1580 by Domenikos Theotokopoulos (1541–1614), the great Cretan painter known to the world simply as El Greco. 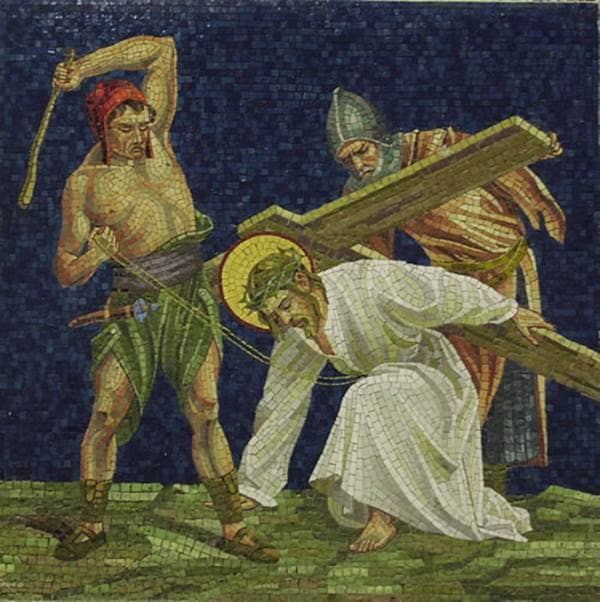 Jesus falls for the first time

Station 3: Jesus falls for the first time. No one seems to be able to remember the name of the artist who portrayed our Lord stumbling under the weight of the cross in painted tiles. This 100-year-old mosaic is part of the Stations of the Cross at Our Lady of the Assumption church in Claremont, California. 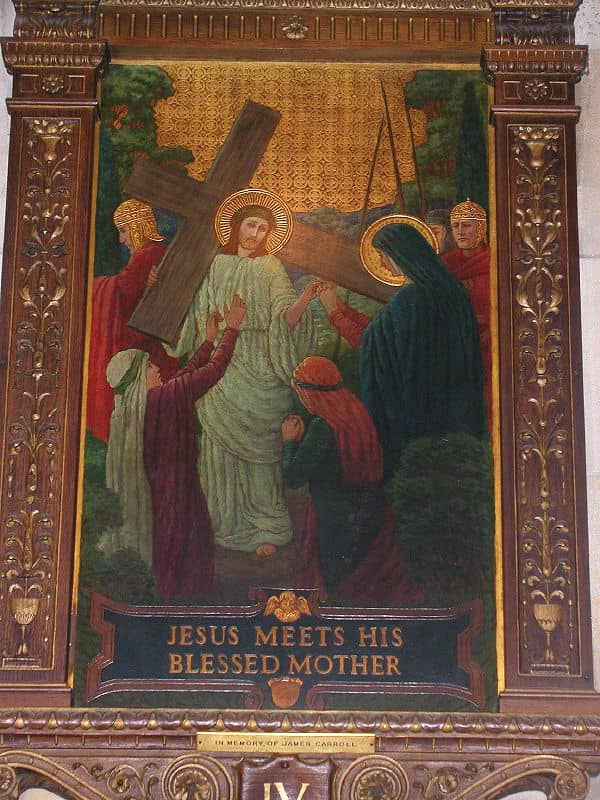 Station 4. Jesus encounters His mother. As He struggles under the heavy burden of the cross, our Lord spots His distraught mother in the crowd. This artwork is part of the Stations of the Cross in the Basilica of the Immaculate Conception in Waterbury, Connecticut. Regrettably, the artist of this 100-year-old watercolor is unknown. 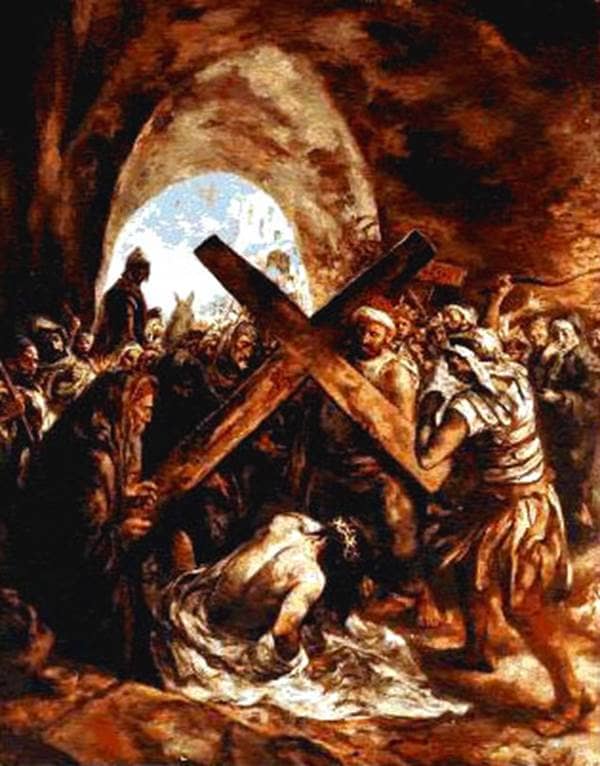 Simon of Cyrene carries the cross

Station 5. Simon of Cyrene carries the cross. Exhausted from His ordeal, abandoned by His disciples, Jesus struggles to carry the cross - but cannot. So, the Roman centurion in charge orders a visitor from Cyrene, Africa, to help. Mark 15:21 says Simon was the father of "Alexander and Rufus." Both are mentioned later by Paul in his Epistles as leaders of the early church. The artist of this painting is unknown. 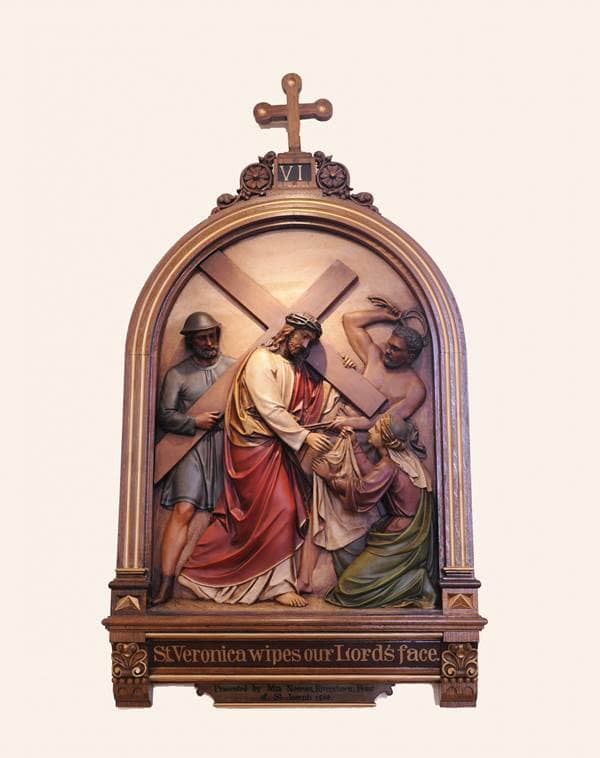 Veronica wipes the face of Jesus

Station 6. Veronica wipes the face of Jesus with her scarf. The Bible does not mention Veronica, however tradition says that she was a follower who could not contain herself any longer and came to His aid, wiping his face with her scarf. Some say she was the woman healed in Matthew 4:20. Her scarf was said to bear Jesus' image -- but unlike the Shroud of Turin, has not survived to modern times. It is believed to have been destroyed in 1527 when Rome was looted by mutinous troops of the Holy Roman Emperor Charles V. This bas relief carving and painting is one of the Stations of the Cross at the Catholic Church of Glanmire Parish in County Cork, Ireland. 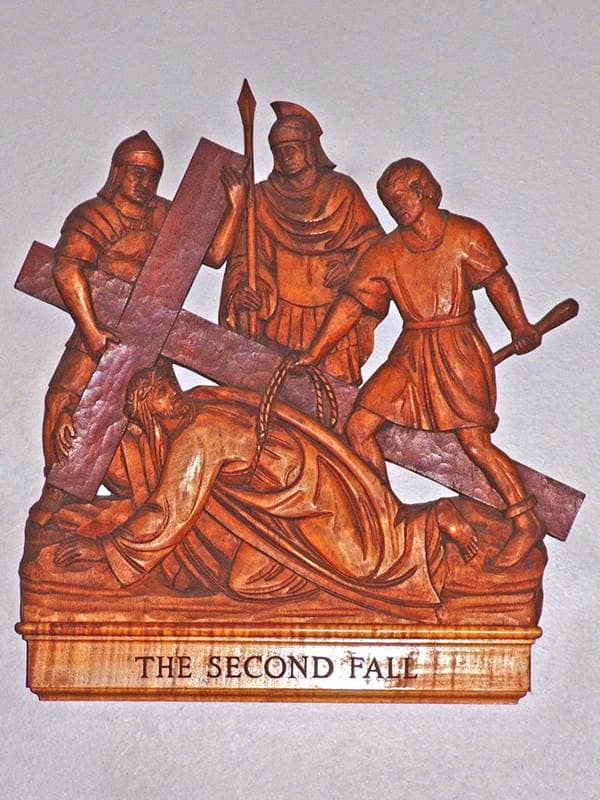 Station 7. Jesus falls a second time. The biblical account does not detail just how many times Jesus stumbled, however tradition tells of three separate times when He fell to the ground under the burden of the cross. This wood carving is by an unknown sculptor. 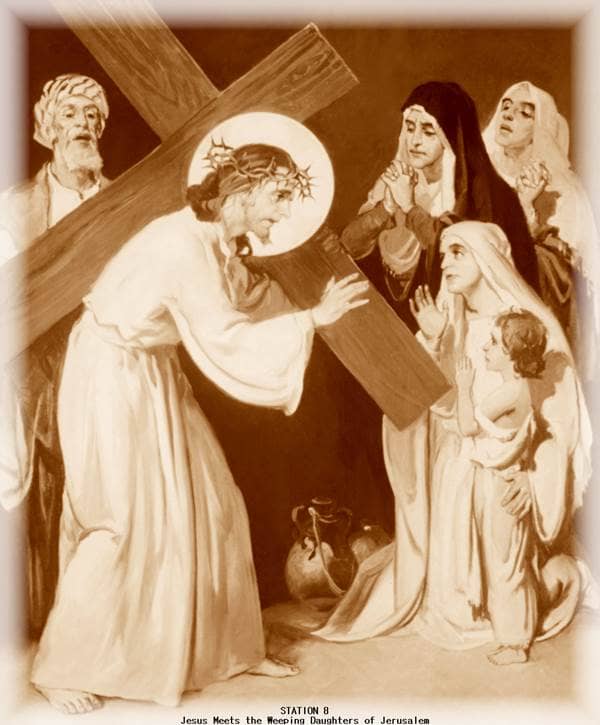 Station 8. Jesus meets the daughters of Jerusalem. The biblical account tells of how the women who had followed our Lord throughout His ministry were among the few who were faithful throughout His terrible ordeal on Good Friday. The Bible does say that the Twelve Disciples were afraid - with only John the Beloved Disciple standing with the women at the foot of the cross. This sepia-tone print is taken from a 19th Century printer's engraving. The engraver's name is not known. 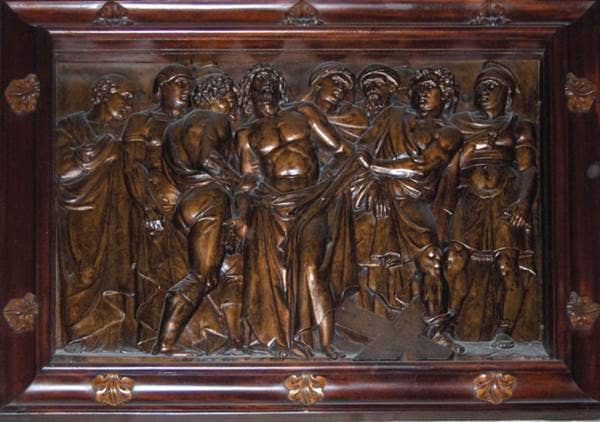 Jesus falls for the third time

Station 9. Jesus falls for the third time. The biblical account is clear that our Lord had difficulty in the long trek to the hill called Calvary. This beautiful wood carving is from the Stations of the Cross at the Cathedral of Santiago de Compostela in Spain. 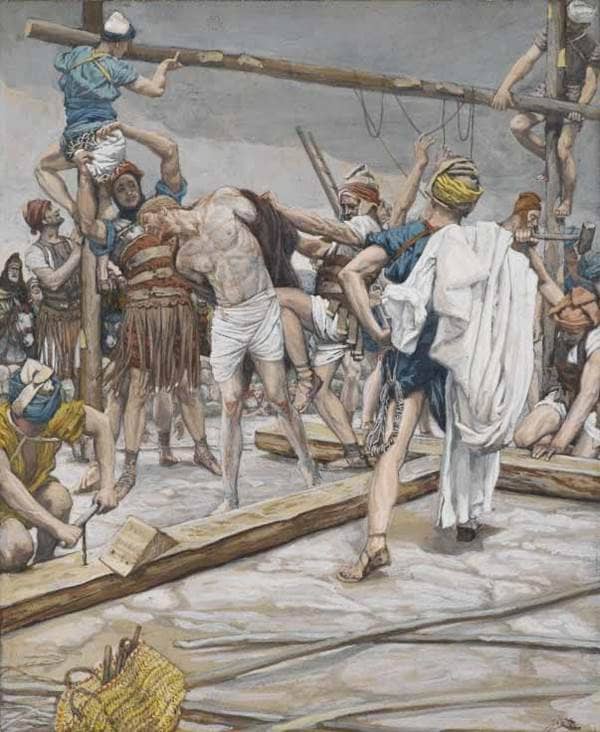 Jesus is stripped of His robe

Station 10. Jesus is stripped of His robe. The Bible tells of the soldiers at the foot of the cross gambling for His seamless robe. Crucifixion was a dehumanizing, brutal means of execution. The condemned were given no dignity - and allowed to suffer, lingering between life and death for as long as a week, according to historical accounts. This watercolor was painted by French artist  James Jacques Tissot (1836-1902). 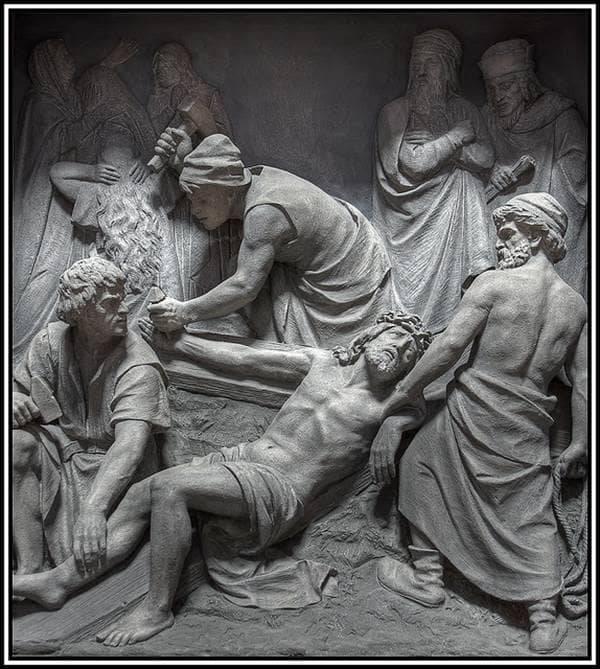 Jesus is nailed to the cross

Station 11. Jesus is nailed to the cross. The brutality of crucifixion defies human imagination. Here, the Lord's hands and feet are pinned to the cross with rough iron spikes. This bas relief sculpture is part of the Stations of the Cross at Ludwigskirche (St. Ludwig's Church) in Darmstadt, Germany. 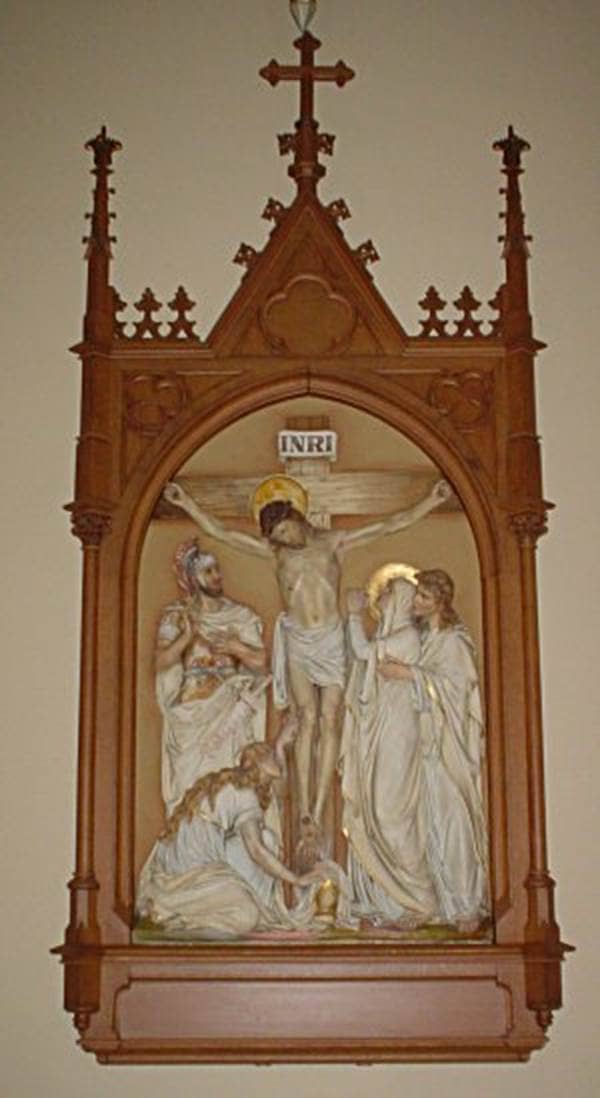 Jesus dies on the cross

Station 12. Jesus dies on the cross. Bearing the sins of the world, the Son of God looks out at His tormentors and says, "Father, forgive them for they know not what they do." Then, the sky darkens, the earth trembles, the veil separating the Holy Place from the Holy of Holies in the Temple is torn in two - and the Lamb of God dies. This carving has been one of the Stations of the Cross for more than 100 years at St. Raphael's Cathedral in Dubuque, Iowa. 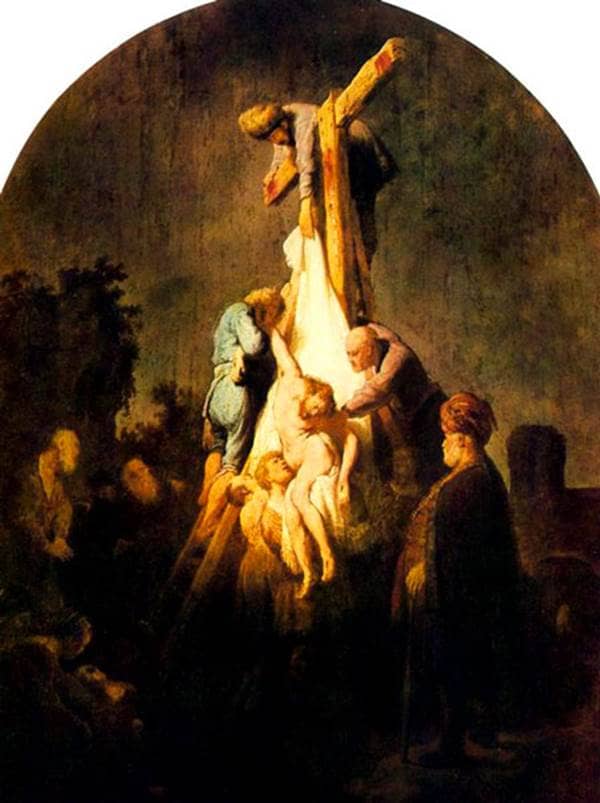 Jesus' body is removed from the cross

Station 13. Jesus' body is removed from the cross. It is over. This dramatic oil painting is by Rembrandt van Rijn (1606-1669). The artist put himself into the painting as the mourning figure in blue, penitent and shaken with suffering, helping remove Christ's body. 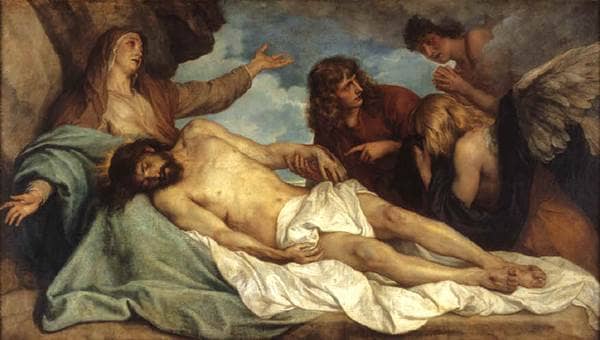 Jesus' body is laid in the tomb

Station 14. Jesus' body is laid in the tomb. The faithful women and the Disciples are assisted by Nicodemus and place His body in a new tomb in a garden nearby donated by Joseph of Arimathea. This painting, "The Lamentation," is by the Flemish master Antony Van Dyck (1599-1641) and is on display at the Palais des Beaux Arts de Bruxelles museum in Brussels, Belgium. 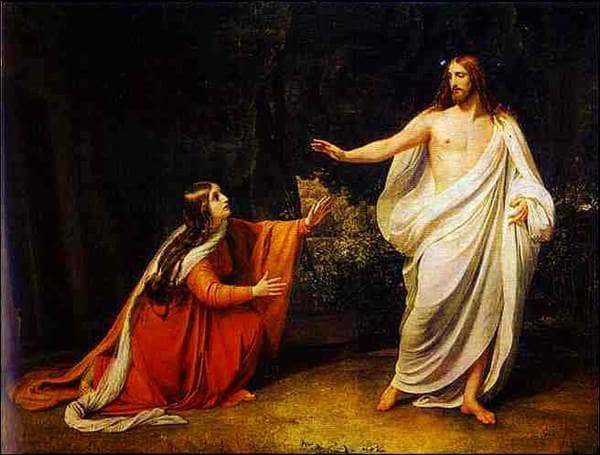 He is risen! Allelujah!

The Resurrection of Jesus. Although not traditionally part of the Stations of the Cross, the Resurrection is often included as a fifteenth station signifying the triumph of good over evil, of life over death and of hope over despair. After years of official atheism in Russia, this masterpiece is again on display in a place of prominence at the State Russian Museum in Moscow. It is "Appearance of Christ to Mary Madgalene," painted in 1835 by the Russian master Alexander Ivanov (1806-1858). 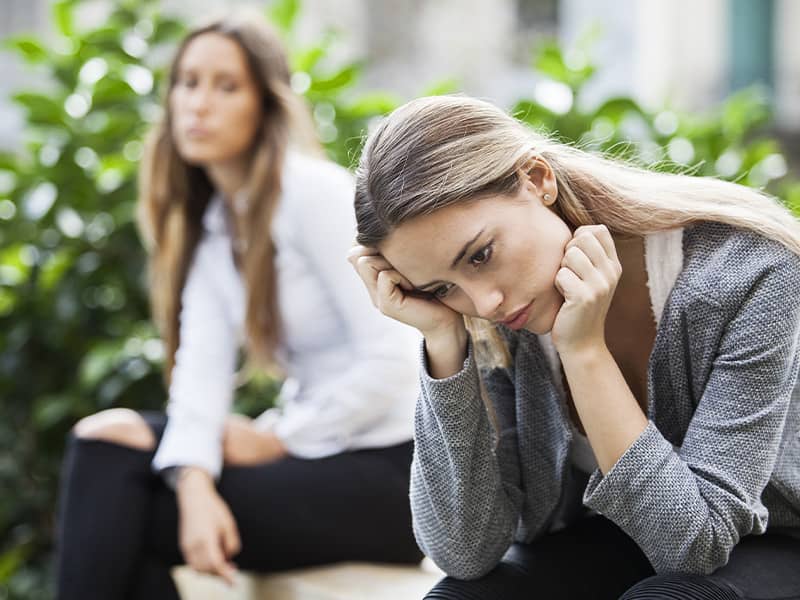 6 Ways Fear Holds Us Back and How to Conquer It

Don’t allow fear to control you. Read next feature >