Advice on Balancing the Budget

Every Christian knows that we are called to love God with all our heart, mind, soul, and strength. But what about our wallet? 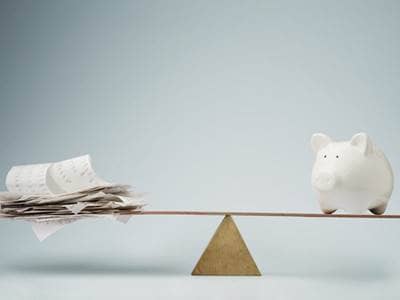 From The Christian Wallet: Spending, Giving, and Living with a Conscience. © 2016 Mike Slaughter. Used by permission of Westminster John Knox Press. www.wjkbooks.com

At times the wrong well may be expansive and expensive, like an extravagantly oversized home or a luxuriously equipped SUV. In many cases however, our intoxicating substitutes may be as inexpensive as a ringtone, but with repetitive spending or inefficiencies, the receipts are racked up. In my research, I found several lists identifying top ways Americans waste money. Many of the wasteful areas identified were on multiple lists. Let’s take a look at some of those.

Wasted Energy - One source estimated that we collectively throw away $443 billion on avoidable energy costs. So unplugging energy vam- pires when not in use, turning off lights once in a while, and setting our thermostats at more reasonable ranges can add up. If I start to complain about being chilly in the winter when Carolyn turns the thermostat down, she gently reminds me how fortunate we are to have a furnace at all and to have draw- ers full of sweaters to put on.

Daily Coffee Trips - One survey indicated that American workers who regularly buy coffee out each week spend on average $1,092 annually. That’s $21 a week, or approximately four-to-five fancy coffee drinks. What else could you do with that money? My United Methodist denomination’s “Imagine No Malaria” initiative has the goal of eliminating death by malaria in Africa in our lifetime. Each $10 contributed provides one insecticide-treated bed net, and $1,092 would buy 109 nets, potentially protecting more than three hundred lives. Three-hundred lives or three-hun- dred lattes? I can brew at home.

Premium Cable Packages - If I think I can actually justify the exorbitant costs of premium packages against the quantity of my television viewing time, I am simply watching too much TV—end of discussion.

Unused Gym Memberships - When gyms set sales targets for their membership fees, they do so based on the expectation that only 18 percent of gym members will show up consistently to work out. That’s in part why it’s so much easier to find workout machines available in mid-February than in mid-January. The other 82 percent of gym members are no longer showing up.

ATM Fees - When we use out-of-network ATM machines to withdraw cash, we typically pay between $3 to $4 per use. Planning ahead could eliminate this.

Unhealthy Habits - Americans spend $117 billion on fast food each year, and $2.8 billion on Halloween candy, just to name a few of our bad- health habits. Other costly culprits include alcohol, tobacco, and soda (or pop, as it’s known in my part of the country).

Unused Gift Cards - Approximately $2 billion worth of gift cards go unredeemed each year. I recently opened up the glove compartment of our car and found several tucked inside among the extra napkins and vehicle manuals.

Credit-Card Interest - Collectively, Americans owe over $800 billion in credit-card debt. If credit-card interest rates average between 13 to 15 per- cent, and many are higher, you don’t actually have to do the math to know that the interest charges are astronomical.

Mike Slaughter's The Christian Wallet is full of a lot of resourceful information. The book helps Christians grapple with important questions about using money: how we spend, how we live, how we save, how we give, and what it all means.

Mike Slaughter is the lead pastor at Ginghamsburg Church in Tipp City, Ohio. Under his leadership, Ginghamsburg became known as an early innovator of small group ministry and a leader in global mission efforts. Get more information on The Christian Wallet: Spending, Giving, and Living with a Conscience.