Zamperini: The Man Behind Unbroken

No matter what horrific hell raising atrocity he was presented with, he stood tall and challenged fear. It didn’t matter if it were Zamperini the Olympian, Zamperini the Prisoner of War or Zamperini the survivor – he never broke. 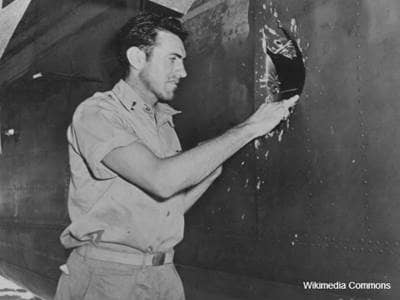 He’s more than the man behind Angelina Jolie’s new film. He’s more than an athlete or soldier. Louis Zamperini is courage and bravery. He is the inspiration that drives a dream. He is the light that motivates us. He is the fight we need to combat a battle.

Zamperini lived a life of many journeys. During his teenage years he turned to track when he began to get in trouble in high school. His speed and resilience was impeccable, as he broke records and ended up earning a scholarship to University of Southern California. In 1936, Zamperini tried out and became the youngest American qualifier in the 5,000 meter event – he placed in the 1936 Summer Olympics in Berlin, Germany.

In September 1941, Zamperini enlisted in the United States Army Air Forces and earned a commission as a second lieutenant. He was deployed to the Pacific Island of Funafuti as a bombardier on the B-24 Liberator bomber Super Man. In April 1943, Zamperini’s plane was badly damaged in combat and a number of the crew injured. Later, Zamperini and other healthy soldiers accepted the challenge to conduct a search for a lost aircraft and crew - while on the search, mechanical difficulties caused the plane to crash into the ocean killing eight of the eleven men aboard. Zamperini survived along with two of his crewmates.

The men had little food and no water. Without many options to survive, the men captured rainwater and ate small fish raw. One of the crew died, leaving Zamperini and one other. Stranded at sea for over a month - on their 47th day adrift, Zamperini and his crewmate reached land in the Marshall Islands and were immediately captured by the Japanese Navy. Beaten severally, emotionally and physically, Zamperini remained strong. He stood as a symbol of strength and never allowed the enemy to get the best of him. He was a hero for the fearful and fearless – Zamperini never settled for defeat because he knew there was always more out there.

After the war, Zamperini strived to be a symbol of fortitude and forgiveness. Zamperini was unlike any other motivational figure. He believed in forgiveness and never took sympathy for his misfortunes – instead he used his lessons of life within every opportunity he was given.

You see, Louis Zamperini is the epitome of the term unbroken. No matter what horrific hell raising atrocity he was presented with, he stood tall and challenged fear. It didn’t matter if it were Zamperini the Olympian, Zamperini the Prisoner of War or Zamperini the survivor – he never broke. He never stopped. Even after his death, his legacy continues to forge on and inspire the world.