When Will Heaven Begin?

Ben's vision of heaven was his gift to his family, and to the world. And now this is the Breedlove family's gift to us - an in-depth look at the life and near deaths of Ben, the strength and faith of a young man, and, ultimately, the hope of heaven. 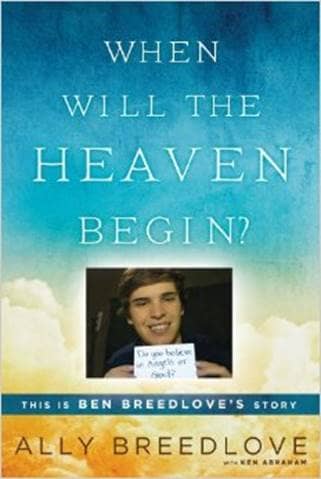 From WHEN WILL THE HEAVEN BEGIN by Ally Breedlove. Reprinted by arrangement with New American Library, a member of Penguin Group (USA) LLC, a Penguin Random House Company. Copyright © The Ben Breedlove Trust, 2013.

Ben stepped into his bedroom, and sat down at his studio desk, taking in the sight of his personal sanctuary. He loved this room that he had inherited when Ally went off to college. In addition to the corner “studio,” he was surrounded by so many meaningful personal items—a small cross given to him by some missionaries from Thailand sat on his nightstand right where the missionaries had left it for him years ago; his surfboard and wakeboard that he loved so much that he kept it in his bedroom rather than a garage or in the boat; his drumsticks, and several personal photos. This was Ben’s place. Or, at least it had been.

His desk, still adorned with his favorite set props, was illuminated by the bright flood of his studio lighting. The gigantic green screen still hung from his bedroom wall, transforming a teenage bedroom into a professional setting. This room had set the stage for every video Ben had ever made, and it would now, for his final project. As much as he loved every second of life in this world, he had a strong feeling that it was no longer his primary residence. Ben took his seat in his studio, and settled into the limelight.

He reached in a drawer and pulled out some three by five inch blank white note cards. He found a black Sharpie and began to write.

He had seen a video on YouTube in which another teen, Kieran Miles, used note cards to express a message without ever speaking a word. Kieran shared how he had been bullied by others for most of his life, but that he was going to make it through, despite the pain and struggle. Ben was profoundly moved by Kieran’s suffering. In fact, after discovering the video, he brought his computer into the kitchen to show it to his parents. Ben decided he had a message that could encourage people to have hope, so he wanted to express it in a similar manner as Kieran had done. In producing his own video, Ben credited Kieran as his inspiration for the flash-card form in which he presented his message.

Jake and his friend Nate popped into Ben’s room to see what he was doing. Jake was accustomed to seeing his brother working on videos, so he wasn’t surprised to see Ben on his computer again. Jake and Nate were more interested in tossing a ball to Chica, the Breedloves’ four-year-old, purebred Maltese, so they went into the room across the hall and didn’t pay much attention to what Ben was doing.

Sitting in front of his green screen, the same spot where he had created videos from various “locations” around the world, Ben leaned in toward the camera on his computer. Normally, he made his videos with his whole set-up—the studio, cameras, lights, with his pseudo-microphone sitting atop his desk, but not this time. For this project, Ben knelt next to his bed, and leaned in close to his laptop. He punched in the music to an instrumental version of “Mad World”, a song originally recorded by British new wave band, Tears For Fears. Singer-songwriter, Gary Jules, rerecorded the song for the movie,Donnie Darko. Jules’ version of the song was also used dozens of times as background music for the classic soap opera, General Hospital, as well as a prime time, hospital based show, Private Practice, a spin off of Grey’s Anatomy. The song was a natural choice for Ben. Although the lyrics weren’t featured in the video, Ben knew them by heart. They almost perfectly choreographed his brush with heaven.
I find it kind of funny . . . .

No doubt, a reference to his vision on the floor at school, Ben began to show the note-cards in the order he had written them, holding up each card for just a few seconds, barely long enough for his viewers to read the message, before moving on to the next card. He said not a word, but told his story through the handwritten words on the cards, his demeanor, and his countenance.

Ben’s facial features matched the message on the cards. When the card presented a serious message describing his condition of hypertrophic cardiomyopathy, Ben’s countenance was commensurately serious. But when he told of positive, happy experiences, such as the bright light he had experienced when he was four, or the “vision” in which Kid Cudi joined him in the bright white, waiting room of heaven, he displayed a hint of a smile that let the viewer know that this was a good moment in Ben’s life. Occasionally, his eyes glanced to his upper right, as though searching for something, but he made no reference to whatever he saw there.

When he described receiving a pacemaker, Ben stood up momentarily, and pulled back the neck of his t-shirt, revealing the large reddish scar on his chest. Other than that, he remained seated throughout both sections of the video, staying especially close to the camera on his computer.

He picked up the story on part two of the video, beginning with his collapse in school on December 6th, just a few weeks earlier. He wasn’t obsessed so much with artistic excellence or form on this video. It was obvious that Ben was more concerned about the message than he was the medium. On one of the cards, he had blacked out a mistake rather than creating a new card. Near the end of part 2, Chica’s wagging tail could be clearly seen swishing into the camera shot over Ben’s right shoulder. Ben didn’t seem to mind.

As Ben came to the conclusion of his story, he slowed the pace of the cards, holding each one slightly longer. After describing his experience in “heaven’s waiting room,” Ben added on one of the last cards the poignant statement, “I wish I NEVER woke up.”

Then before the viewer even had time to grapple with the meaning of that statement, Ben asked a question on the next to last card—a question that would profoundly impact the heart of nearly every person who would watch the video. On the next to last card, Ben asked, “Do you believe in Angels or God?”
Holding one more card, Ben added the important message he wanted to share with his friends.

The final card read simply: “I Do.”

Looking into the computer screen, Ben gave the video one last look, and pressed “upload.” The two-part YouTube videos simply titled, “This is My Story,” now belonged to the world.

Ally Breedlove is Ben Breedlove’s older sister. She currently lives in Austin, Texas, where she pursues her love of film, writing, and speaking.