In his new book, What Works: Common Sense Solutions for a Stronger America, Cal Thomas exposes how our spiritual and political lives have become like the movie "Groundhog Day." 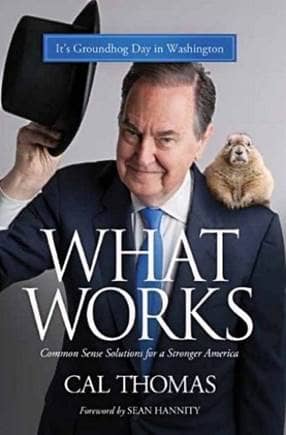 Adapted from What Works by Cal Thomas. Copyright ã 2014. Used by permission of Zondervan. Buy What Works now.

“What has been will be again, what has been done will be done again; there is nothing new under the sun. Is there anything of which one can say, ’Look! This is something new’?  It was here already, long ago; it was here before our time. (Ecclesiastes 1:9-10)

After three decades of writing a syndicated column and as a reporter before that, I have pretty much seen it all, especially Man’s futile attempts to perfect himself and alter certain behavior through government, specifically the Federal government.

There are a number of reasons for this failure, but chief among them is that we don’t focus on our past and on what worked in previous generations.

We haven’t just emerged from a cave and must discover fire, or invent the wheel. We have a history – a human and an American history. Why does each generation behave as if it is the first? Why does so much of our politics resemble the film Groundhog Day in which Bill Murray wakes up each morning to repeat every event of the day before, ad infinitum?

Why don’t we consult the past and common sense (and yes ancient truths contained in such books as Ecclesiastes and the Proverbs) in order to see what others discovered works before we were born? Wisdom existed before the Internet and other forms of mass communication – and video games, Facebook and Twitter. In fact, “Social media” can impede sound thinking and workable solutions to the problems confronting us.

Today, we have more information than ever, but less wisdom; more talk, but less listening; more things in the superficial showroom (celebrities are a good example) and less in the intellectual storeroom (that would be knowledge).

We KNOW what works – historically and instinctively, but politics too often gets in the way, as does ignorance. Too few people pay attention and the politicians easily pick their pockets – literally and intellectually.

Instead of the constant jockeying for political advantage, suppose we started focusing on what promotes the general welfare, regardless of which party or ideology gets the credit? It’s amazing what problems can be solved if solutions, not partisan gain, become the goal.

Solutions exist, mostly at the state level, but the major media, of which I have been a part most of my professional life, prefer combat to resolution. Real solutions would give them nothing to talk about and thus, lower ratings, which would lead to smaller profits.

How about abandoning things that don’t work and start focusing on what does work? The Preamble to the Constitution says “we the people,” not “you the government.” If we want to end the endless cycle, sufficient numbers of us have to wake-up each day with a different attitude, not just toward government, but toward ourselves. Government as intended by our founders, should be a last resort, not a first resource. When we start thinking as they did, we will see real change come to America, but not before.