“With a risk of sounding cliché, this actually has changed my life. I have a new lease on life. I look at things with a newfound appreciation,” said Hayes. “I am so thankful and have a realization for how precious this life is.” 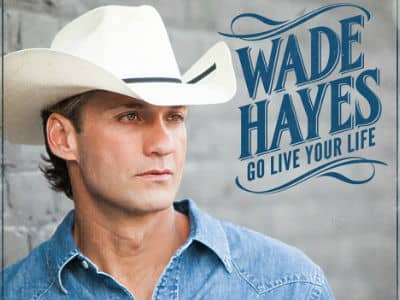 Cancer is scary. There is no ifs, ands or buts about it – just the word, cancer, can send shivers down your spine and send you into a shock. Colon cancer is a widely known cancer that affects 136,000 people each year. We, as a society, have to be proactive and take the necessary measures to catch symptoms early on and attend the routine screenings that can save lives.

Country star, Wade Hayes received a harsh dose of reality when he was diagnosed with Stage Four Colon Cancer in December 2011. Thankfully, he successfully underwent operations, the same month, to remove tumors – having the remaining tumors removed in March 2012.

“With a risk of sounding cliché, this actually has changed my life. I have a new lease on life. I look at things with a newfound appreciation,” said Hayes. “I am so thankful and have a realization for how precious this life is.”

Hayes’ experience has influenced his new song “Go Live Your Life.” After a conversation with his oncologist, Hayes’ doctor encouraged him to go live his life. After discovering his stage four diagnosis and coming face-to-face with the reality that he could possibly die from the disease, he was perplexed on what his next step in life would be. Hayes dug dig and turned to his faith for inspiration.

Hayes said someone told me, “I’m visualizing where you want to be, not where you are.”

So Hayes fought for day when his treatment would be through and the idea of being cancer-free aided him to see a life that would be one day free of the sickness and the struggle. “There’s no way to sugar coat it because it’s tough. But if you can find that thing to live for and strive for,” said Hayes then you can see a light at the end of the tunnel.

Hayes has now partnered with Genentech and for every download the corporation is going to donate a dollar to help those who are battling colon cancer. Hayes stresses that early detection is ideal and necessary. If colon cancer is caught early enough the situation is treatable and can be resolved with much easier measures.