This former "Lady" won’t take it. 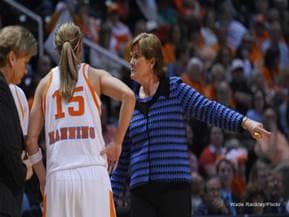 This former "Lady" won’t take it. Beginning on July 2015 the University of Tennessee will drop “Lady” from its branding except for the women’s basketball team. All teams will be under one name after branding studies were conducted by the school, athletic departments and collaboration with student-athletes and coaches. Due to Coach Pat Summitt’s legacy, the women’s basketball team will remain unscathed.

Not so fast said former Lady Vol swimmer Tricia Weaner, who started a petition collecting over 4,000 signatures to reverse the decision.

“The T served as a fountain of inspiration during my tenure as a student-athlete. It is heart breaking to realize that no future athlete will have the opportunity to be a part of the Lady Vol tradition,” she told “Fox and Friends.”

But brand consistency is critical across the university and to future students stated UT Chancellor Jimmy G. Creek.

“It is important that we take advantage of all of the successes across this great campus, both in academics and athletics.”

Weaner does not support the athletic department’s decision, so the petition is another tool for disapproval.

"By signing this petition, I do not support the Tennessee Athletic Department's decision to put all sports under the Power T and eliminate the presence of the Lady Vol T in all women’s sports.”

Under Summitt the Lady Vols won eight national titles, posting a 1,098-208 record in 38 years. Summitt retired in 2012 one year later after her Alzheimer’s diagnoses. There is no comment from the coach regarding the rebranding.