The Truth Behind Dolphin Tale 2

There were no plans for a Dolphin Tale sequel until the events of Hopes rescue and rehabilitation began to unveil. The real life events centralized a theme in the movie Dolphin Tale 2. 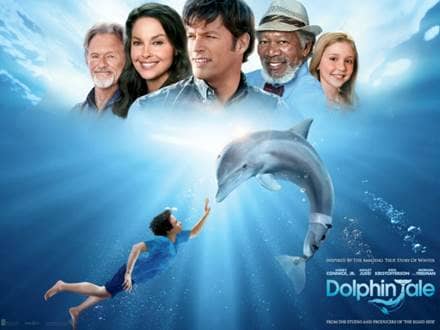 Sometimes fate steps in and unfolds events that shake things up but in the end the actions have a purpose that will change the future.

There is always a light at the end of the tunnel, despite the obstacles and tragedy that we must overcome beforehand. Dolphin Tale 2, is a great story that speaks to trials, tribulations and a happy ending.

After wrapping up Dolphin Tale 1, the cast and crew got together to celebrate the end of filming. During the party, the Aquarium received a phone call that a baby dolphin was in need of rescuing and wanted to see if they could bring her in to CMA. The team rushed to make arrangements to save the baby dolphin and get her transported to their facility as safely and quickly as possible.

During transportation, to CMA, there were many fears that the baby dolphin was too young to survive the trip but she did and was named Hope. Like Winter, Hope is an Atlantic bottlenose dolphin and was found in the same part of Florida by the same rescue team.
Since Hope was stranded at a young age to learn and develop life skills to survive in the wild, it was agreed that she would reside at CMA with winter and become pool mates. With the tragedy of Panama, Winter’s surrogate mother, passing it was a blessing to have Hope brought together with Winter.

There were no plans for a Dolphin Tale sequel until the events of Hopes rescue and rehabilitation began to unveil. The real life events centralized a theme in the movie Dolphin Tale 2. Time will continue to move forward because change is inescapable. As tough as it may be, we must overcome the obstacles that are placed in front of us and make the most out of life.