The Rewards of Failure

Don't get discouraged because of failure, instead look and make the most out of negativity's positivity. 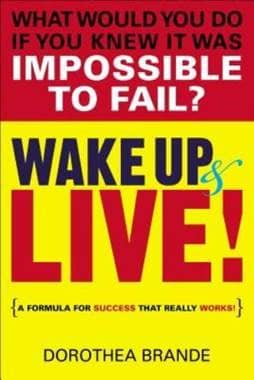 Absurd as it may seem at first consideration that anyone would solemnly enter into even an unconscious conspiracy to fail, it is a matter of observation  that there is hardly one person in a hundred who does not, in some fashion, deliberately cripple and thwart himself. To understand why this should be so it is necessary to examine for a chapter what may be called, without paradox, the rewards of failure.

The recent widespread interest in all branches of psychology has accustomed us to accepting an idea which, when first offered, seemed laughable: that we are all, at some level, engaged most of the time in revery. We dream either consciously or unconsciously, awake or asleep, of a situation in which we feel we should be happier than we are in real life. Occasionally some childish idea of happiness or success crops up to confuse or hamper us in the business of adult living. Sometimes the dream is of a life of luxurious idleness, the childish Unconscious determined on refusing to leave the safe shelter of the nursery, where all wants were remedied as soon as felt, where warmth and food and love were given freely and unearned. As Emerson wrote, long before we had any technical vocabulary to express that backward- turning revery, long before we knew of “fixations” or of “narcissism,” “We do not believe there is any force in today to rival or recreate that beautiful Yesterday. We linger in the ruins of the old tent where once we had bread and shelter.” To some extent this is true of all of us, but less true of the happy and successful adult than of others.

At other times, ludicrously enough, the life- wasting revery is about success: the mild man is a Napoleon of war or finance, the mouse- like woman a siren. If reality never broke in upon such revery, the dreamer might be happier, self-absorbed in his silent tale-spinning, than if he were to find himself in a position to realize some part of it. Such revery is in itself compensation for a life of dull routine or uneventful monotony. But, the world being what it is, the dreamer must live, for part of his time at least, in the cold atmosphere of fact. This is no Land of Cockaigne that we inhabit: roast pigs do not run about crying “Eat me!” Fruit does not fall from the trees into our mouths. However blissful the day-dream we entertain, we must wake from it sometimes and struggle with the hard conditions of real living.

The inveterate dreamer will struggle only just as much as he need, and no more. He will do anything half- heartedly to get his bread and butter. Then, when his daily task is over, he will be back at his dreams again, whether he realizes it or not. He succeeds at only one thing: in clearing away a little space, gaining each day a few hours of free time, for just one purpose— to go on wasting his life. But his dream is happy. It is, for him, a true compensation for his failure in every other relation, and so he continues in it. Yet, since after all happiness is the true goal, he is deluded by not realizing that the smallest success in reality brings with it more happiness than years of revery.

Consider, for instance, that if you try for anything just enough to give yourself some justification for saying that you have tried, you can fold your hands for the rest of your days. You can say humbly that you were tried and found wanting in those qualities which make for real success. This is rather a rare remark, but one of those which can be heard now and then from older failures, usually in a humorously deprecating tone. It will sound very honest and touching; and there is no earthly way in which it can be proved against the complainant that his statement is not fully true. He has saved himself a lifetime of effort by some means, nevertheless. If you join this group you can watch the struggles of others with an eye half-amused, half-envious, enjoying the results of their successes, but perhaps even more— human nature being what it is— the spectacle of those who fail, and who take up their onlookers’ positions beside you.