The Light Between Us: Two Meteors

In her inspirational memoir, The Light Between Us, Jackson shares what she's learned about the Universe from the readings she's done for people who've lost loved ones and how it works to guide us to live in a more loving and meaningful way, right here, right now. 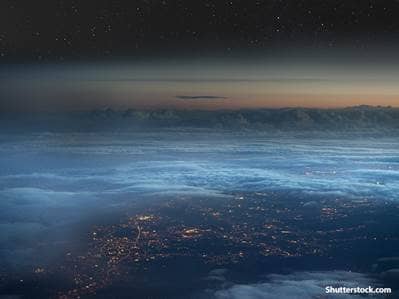 This is an excerpt from the book The Light Between Us by Laura Lynne Jackson.

Most of those who come to me for readings believe in the Other Side, but many do not. Some fully expect to contact those who have passed. But others are decidedly not believers.

One of them was Jim Calzia.

Jim met Kathy when they were seventeen and they married while still in college. Jim became a geologist, Kathy a nurse educator. They settled in California and raised three sons together. There had been hard times—Kathy overcame a difficult battle with breast cancer—but overall they had a beautiful life together.

In time, Kathy and Jim retired. They had begun to remodel their home and planned to spend the rest of their lives there, but just a few days after retiring, Kathy contracted pneumonia and they soon discovered that her immune system had been compromised by an experimental cancer treatment she’d undergone years before. Kathy passed away eight days later.

Nothing helped ease Jim’s grief. He didn’t answer calls, didn’t allow friends to visit. The months after Kathy passed are still too painful for him to recall.

One day, Jim developed a horrible migraine. He’d never had one, though Kathy used to get them, and in that moment of extreme pain, Jim thought of his wife and had an epiphany.

Kathy would not want this. Together they had built a life, and now he was squandering it.

Jim resumed the renovation he and Kathy had begun. He took pains to execute every last detail the way Kathy had intended and was about to install a stove when the electrician insisted that Kathy had wanted a specific gas stove with red knobs. Jim installed the stove that Kathy had chosen.

Not long after, Jim was driving when he saw two meteors streaking toward the beach. They were incredibly bright and fast, and Jim braced for impact, then looked again for the meteors, but they were gone. It was as if he’d imagined the whole thing.

Jim asked around over the next few days to see if anyone had seen or heard about two giant meteors over the beach, but no one had.

Weeks later, Jim’s son Kevin called. Kevin told Jim about a video of a reading I had had with his wife just hours after Jim had seen the meteors.

Jim watched the reading and immediately noticed that my hand gestures were the same as Kathy’s.

He listened as I described family events in precisely the way Kathy would have.

Kathy talked—through me—for the next hour.

Toward the end of the reading, Jim’s wife asked if Kathy had tried to contact him since she passed.

“Oh, yes,” I said. “She has tried but every time she gets close he goes deeper into the darkness. She has tried everything. She has even tried meteors!”

It had been nearly a year since Kathy’s passing when Jim scheduled a reading. Very quickly, I felt his wife step through.

“Your wife is showing me your house,” I said. “The walls are knocked out, the floors are torn up, the ceiling is being lowered.”

Jim smiled. He was in the middle of the remodel. Everything was just as I described.

“I’m also seeing a stove with red knobs,” I said.

Kathy gave me detail after detail that validated her presence. She showed me a handprint on a wall.

“She is saying she sees you touching this wall in the kitchen,” I said.

“The kitchen was her favorite room,” he explained. “Every morning when I go in, I touch the wall for her. Every single morning.”

“She is acknowledging that,” I said. “She is touching you back.”

Kathy showed me a small jar of nail polish.

“Kathy is laughing,” I told Jim. “She is saying, ‘Tease him about why he needs my nail polish.’ ”

“She’s right,” Jim laughed. “I saved her nail polish. I keep it in the garage. It’s the same shade of red as my car, so I use it whenever I need a touch up.”

My reading with Jim showed me how persistently our loved ones try to communicate with us from the Other Side—and how we need to change our perception of the world in order for them to come through.

Jim and I spoke for more than an hour. When the reading was over, Jim stood up, took a couple of deep breaths, and hugged me.

“It felt like I was having a conversation with Kathy,” he said. “I didn’t think I’d ever be able to talk to her again.”

Jim asked to set up another reading, but I knew that wasn’t necessary.

“You don’t need me to talk to Kathy,” I said. “She is everywhere around you. When something happens, pay attention.”

Jim bought a scrapbook, and started writing down everything that struck him as out of the ordinary. He wrote about the rosebush that Kathy’s colleagues had given her when she retired, how it started blooming just after Kathy passed away.

He wrote about the beautiful white dove that flew into the garage while he was working on his car. When the dove landed they stared at each other for what felt like forever, until the dove flew off. Jim said to himself, “That was Kathy.”

Jim believes in something science cannot prove—that one day he and Kathy will be together again. The reading opened his eyes and his heart.

“I can see a scenario where Kathy and I will be reunited,” he says. “I have the tools I need now to go on. To live how Kathy would want me to live.”

Laura Lynne Jackson is a high school English teacher and psychic medium who has been certified by the Windbridge Institute for Applied Research in Human Potential and the Forever Family Foundation. She lives on Long Island with her husband and their three children.