The Ever Classy Nancy Reagan

She was also the ever classy first lady became the most iconic first lady to live at the White House. 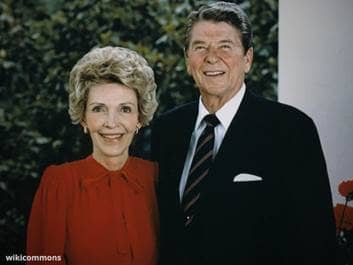 Nancy Reagan captured a quiet elegance as first lady from 1981 to 1989 and was the wife of Ronald Reagan, the 40th president of the U.S. She was also the first lady during the time of her husband’s time as California governor from 1967 to 1975. She became the most iconic first lady to live at the White House.

Sadly, Reagan passed away in 2016 from congestive heart failure, at 94.

She will join her beloved Ronald at the Ronald Reagan Presidential Library in Simi Valley, California, who died on June 5, 2004. They were said to have an amazing relationship that spanned over 50 years since they met as actors in 1952 and where married that same year.

Then, Nancy Davis, an actress with 23 movies to her credit, sought out Reagan as she was accused of being a sympathizer for the communists, and was threatened to be blacklisted. Reagan was the head of the Screen Actors Guild and told her it was a mistake since another actress carried the same name. Her timing was great as he just divorces actress Jane Wyman and the rest is history.

“We remain grateful for Nancy Reagan's life, thankful for her guidance, and prayerful that she and her beloved husband are together again.”

Nancy became on the most influential woman and first lady to take residence in the White House, and is remembered for her “Say no,” anti-drug advertising campaign that the spilled over into pop culture in 1982 in shows like Diff'rent Strokes.

The success of the campaign also was applauded by schools all over the country that began when a young girl asked her:

‘Mrs. Reagan, what do you do if somebody offers you drugs?’ And I said, ’Well, you just say no.’ And there it was born.” She was also known to be very involved with the presidency, and believed in astrology after her husband was shot. She continued to advocate for children and the war against drugs. “To my young friends out there: Life can be great, but not when you can't see it. So, open your eyes to life: to see it in the vivid colors that God gave us as a precious gift to His children, to enjoy life to the fullest, and to make it count. Say yes to your life.”

A flair for entertaining at the White House--she was a protector of husband's political affairs ensuring they were carried out and was coined, "The Iron Lady." This she made no apologies. And if that interferes with affairs of state, then so be it. "No first lady need make apologies for looking [out for]our for her husband’s personal welfare. The first lady is, first of all, a wife.”

Former first lady Barbara Bush said Nancy was devoted to her husband. “Nancy Reagan was totally devoted to President Reagan, and we take comfort that they will be reunited once more. George and I send our prayers and condolences to her family.”

When Ronald died, she worked to protect his legacy and became an advocator for stem cell research to find a cure for Alzheimer’s.

“When people say, ‘You have Alzheimer's,' you have no idea what Alzheimer's is. You know it's not good. You know there's no light at the end of the tunnel. That's the only way you can go. But you really don't know anything about it. And you don't know what to expect.”

After the news of her death, a rainbow was over the  Ronald Reagan Presidential Library .