On Jan. 28, 1986, a plume of smoke was seen coming from a gas leak from the right booster rocket, and what followed was grim. 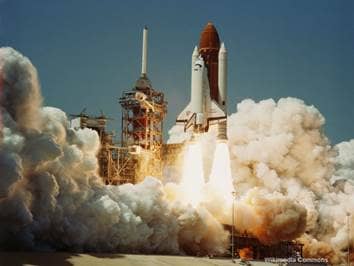 On Jan. 28, 1986, a plume of smoke was seen coming from a gas leak from the right booster rocket, and what followed was grim. The Challenger Space Shuttle broke apart before our eyes and all crew members onboard were killed.

All seven members of the crew were killed, but experts believe they survived the initial impact, but the cabin hit the water at more than 200 miles-per-hour that destroyed all chances of survival. An investigation revealed that the O-ring seal on the craft’s solid rocket booster became brittle in the cold weather. It is believed tests were never done on the O-ring to determine if it could withstand freezing temperatures.

Engineers warned that the rubber O-rings could fail under those conditions. New Hampshire schoolteacher Christa McAuliffe was among the crew killed, and would’ve been the first teacher in space.

McAuliffe said about her love of science that “If I can get some student interested in science, if I can show members of the general public what's going on up there in the space program, then my job's been done. The president felt that it was important to send an ordinary citizen to experience the excitement of space travel as a representative for all Americans.”

After the tragedy, launches were delayed, until the launch of the Discovery. New flights were on hold until 1988.

Why does the Challenger still impact us today?

Many of us witnessed the event unfold before our eyes, and it was the first time we've seen events unfold like this.

Exploring space in an amazing achievement for any country and the Americans were excited to witness this launch during the Cold War. Also, there was a shroud of mystery on what really happened and how we could prevent another disaster. We are still learning the reasons two-decades later. However, the Columbia broke apart after reentering the Earth’s atmosphere after a 16-day mission in 2003--killing another seven crew members.

This was another instance where NASA was criticized for their lack of communication between departments.

Americans will never forget such losses of life. Marking the anniversary of the Challenger or the Columbia is important so we learn from mistakes and pass what was learned onto the next generation.

It shows the strength of the human spirit to push ourselves and reach forward even during tragic times McAuliffe shared before the flight “Reach for it. Push yourself as far as you can.”