Hillary Whittington sheds the stigma surrounding the word transgender by sharing a powerful story of unconditional love and devotion. 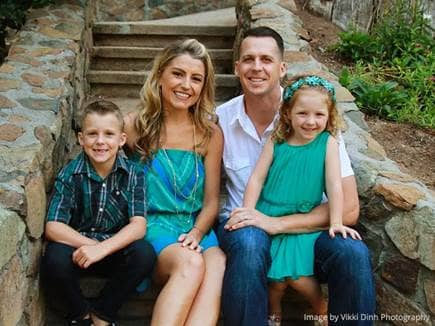 When Hillary and Jeff Whittington posted a YouTube video chronicling their five-year-old son Ryland’s transition from girl to boy, they didn’t expect it to be so well received. The video documented Hillary’s and Jeff’s love for their child and went viral instantly – receiving more than seven million viewers since its posting in May 2014.

Now in Raising Ryland, Hillary is telling the story in its entirety. In the book, Hillary is able to bring hope, strength and humor to her experiences as the parent of a transgender child. Her efforts are educating others, while also helping the world to better understand the issues transgender individuals and their families must overcome.

As a mother, I know that fire that lives within your soul that yearns to protect your children. How do you handle others within your community or within the activities that you participate in?

When Ryland initially transitioned over three years ago, we were met with some questions and pushback from our community. We were nervous signing him up for sports with his female birth certificate, nervous we would run into an old friend who didn’t know, and concerned about many different things. For those close to our family, we sent out a letter explaining our change, with a list of resources so anyone could research the topic further. Most of those people took the time to research what it means to be transgender, and supported us whole-heartedly. When they saw the happiness and authenticity in Ryland, it became hard for anyone to question the decision. There are still some people in our community that do not know about Ryland’s past, and I can only hope they will respond with the same kindness as the majority.

I believe people react negatively to transgender people due to fear, old belief systems and a lack of education. When you have never met someone who is transgender, or researched what it is like for those who are transgender, it is easy to make quick assumptions about it being a choice or something you can change. In reality, there are more transgender people among us than we even know; it’s just a topic that many people choose to keep private due to the lack of understanding in our society.

Based on the book, CNN video and the Raisingryland.com website it’s visible that you’re making the strides to be a voice for the transgendered community. What is your biggest goal as a mother and as an advocate?

My biggest goal is to bring compassion and empathy to those individuals currently jaded by hatred, anger and fear. I know that our journey with Ryland has been very difficult at times, but our journey can be seen as somewhat easy, when you compare us to what other members of this community experience. An alarming rate of transgender individuals face violence, homelessness, unemployment, harassment, and other terrible injustices on a daily basis. Many young children are kicked out of their family home and forced to live on the street. Many young teens attempt to take their own life…and many succeed. African American transgender women are murdered around the globe on a consistent basis, and I knew I could not stand back and watch as this continues to go on. As scary as it is to step up and tell our story, my hope is that it will help people understand and gain empathy for the difficult road our community members frequently travel due to society’s lack of education & understanding. My thoughts were this: If I did nothing, how can I expect for things to progress?

What advice can you give to other parents who have transgender children? What methods/elements have helped your family make the transition?

My advice is to read as much as you can, find a supportive counselor, doctor and support group, be strong even if you feel weak, and build your child up with as many affirmations as possible. There are so many parts to this journey. A parent or loved one needs a huge support network to help them maneuver through the obstacles. Part of the reason I wrote the book was to outline the many obstacles we faced, but no family or child is the same. The amount of information and steps needed for transition could never be outlined briefly. Every single child and family may handle things differently, depending on where they live and where they are in the process. There is no “right” way to be in these shoes. As parents, we need to make sure the schools and teachers are allies, our medical providers are up-to-date with trans issues, we move forward with court procedures so that legal documents match our child’s gender identity, and so many more safeguards to take. Unfortunately, the ability to help your child varies upon where you live and the resources available to you in your area/state. I am hoping we can find a way to help families all around the globe locate the appropriate groups, providers, and resources they need.

What do you believe is the biggest misconception behind an individual being transgender?

The biggest misconception is that a child is “too young to know” how they feel and are “just confused.” Most of the transgender adults I have met thus far had similar feelings Ryland had at very young ages. If one researches further, they will find gender identity develops between the ages of 2-5. As you can imagine, this was not understood many years ago (and still today). Many parents didn’t understand the signs they were seeing, so children were forced to live many years of their lives feeling trapped and misunderstood. When someone is forced to go through an incongruent puberty, irreversible characteristics develop, making it more difficult for a person to transition later with or without parental support. I am hoping the younger generation of transgender children will be identified sooner, and will not have to endure the pain of going through an undesired puberty. With the help of doctors, we can safely “pause” puberty until the child has proven for a number of years to be “set” in their identity.

What do you believe is Ryland’s biggest struggle and how are you overcoming that?

Currently, many of Ryland’s peers and friends do not know about his history. A few of the girls at his school knew him before transition and have supported him as a boy without any issue. Ryland struggles with feelings of fear, for when some of his guy friends learn that he is transgender. He is proud of who he is, but like any child, worries he may be treated differently by his friends when they learn he was a natal female. Thank goodness, he fits in very well at school with the boys and the girls…my hope is that when his other friends do find out, they will treat him with the same dignity and respect they have always shown him.