They endured hunger, torture, and watched their buddies murdered in front of them. This was the life of a Prisoner of War. If you were captured during World War II, life was brutal in Japan. But Louis Zamperini survived. 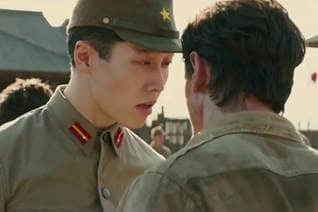 They survived hunger, torture, and watched their buddies murdered in front of them. This was the life of a Prisoner of War. If you were captured during World War II, life was brutal in Japan.

Prisoners were not only tortured, but were treated viciously by the guards. If American airmen were captured, they were beheaded. You might be thinking, “Well, what about the Geneva Convention?”

“No physical or mental torture, nor any other form of coercion, may be inflicted on prisoners of war to secure from them information of any kind whatever,” according to the Geneva Convention.

“Prisoners of war who refuse to answer may not be threatened, insulted, or exposed to unpleasant or disadvantageous treatment of any kind.”

Japan never signed the Geneva Convention, so you can just imagine how prisoners were treated--corporal punishment was in order.

Olympian and War hero Louis Zamperini experienced this and survived the brutality while being held Kwajalein, an island about 2,100 Southwest of Hawaii. Named by prisoners, “The Bird,” Japanese corporal Mutsuhiro Watanabe zeroed in on Zamperini who he belted, clubbed, and threatened to kill. When Watanabe was promoted, Zamperini believed torture was over.

Eventually, Zamperini moved to another camp, but “The Bird” greeted him. Watanabe commanded him to hold a wooden beam, and if he dropped it, guards were ordered to shoot. Zamperini’s refused to give up, and “The Bird” was defeated mentally.

Zamperini could have escaped prison life. The Japanese wanted to use him as a propaganda tool on the radio. They demanded he read a script that said he was being treated well, and to praise the Japanese regime.

Zamperini refused to be a traitor to the U.S. and was carted back to camp to see Watanabe.

The Americans were finally freed in 1945, but the ghosts of Zamperini’s past tormented him. He lost his livelihood as a runner, and turned to drinking. He attended a Billy Graham meeting four years later and received Christ.

This opened up doors for inner healing, and forgiving his enemies. So Zamperini decided to visit camp guards living at Sugamo Prison in Tokyo to personally forgive them. He eventually sought out the “The Bird,” but was denied a meeting in 1998. He never backed down, and although his journey was unbelievable.

Zamperini toured, witnessed, and wrote books about his life, and the film, “Unbroken” invites us to experience what our hero experienced.

A lesson threaded in Zamperini’s testimony is again--never back down when facing adversity. "If you can take it, you can make it."

For more information on the Academy Award nominated film go to Unbroken.