Most Inspirational of 2015 – Shonda Rhimes

Shonda Rhimes has single handedly removed old aged stereotypes that many opinions have reformed to. Shows like Grey’s Anatomy, Scandal and How to Get Away With Murder are paving the way for other shows on television. 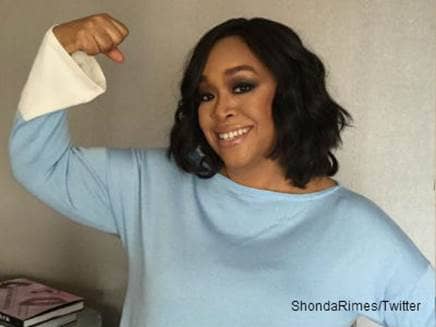 There is no doubt that Shonda Rhimes is the queen of television. Grey’s Anatomy, Scandal and How to Get Away With Murder attracted millions of viewers each week.

Rhimes is the youngest of six children. In various interviews, Rhimes has said she always enjoyed storytelling and that her time as a hospital volunteer during her high school years sparked an interest in hospital environments. Throughout college she wrote for the newspaper, and went on to college to earn a bachelor’s degree in English and film studies. And then she continued on to obtain a Master of Fine Arts. While trying to make it as a scriptwriter in Hollywood, Rhimes worked at a variety of jobs, including as an office administrator, and as a counselor at a job center that taught mentally ill and homeless people job skills.

Rhimes is doing more than getting ratings, she’s revolutionizing TV land by writing lead roles for strong women and people of color. Not only does Rhimes create entertaining story lines, she is able to discuss love and a women’s self worth with her brilliant works. Her shows are able to remove the stereotypical personas attached to women and people of color. The characters are very real and relatable which is refreshing to viewers because they no longer have to live up to standards that are, in all actuality, truly unattainable.

In an interview with Elle Magazine Rhimes said, “The entire world is skewed from the white male perspective. If you’re a woman, they have to say it’s a female-driven comedy. If it’s a comedy with Latinos in it, it’s a Latino comedy. “Normal” is white male, and I find that to be shocking and ridiculous.” She went on, in the interview, to discuss the struggles on the vision of women by saying that every woman is different. Rhimes outspokenly said, “My black is not you black. Viola was very clear about this: I’m a dark-skinned woman with a dark-skinned woman’s hair, and that woman is never revealed on television – that kind of hair is never revealed. I’ve never seen that kind of woman get to exist on network television and get to be three-dimensional and have someone love her.”

Moreover, Rhimes is further revolutionizing television by featuring gay characters and scenes on her shows. When Rhimes aired the first episodes of Scandal and How to Get Away with Murder with “gay scenes” many viewers turned to Twitter to express their feelings – many people shared opinions that were against it. @Dabdelhakiem tweeted: “@shondarhimes the gay scenes in scandal and how to get away with murder are too much. There is no point and they add nothing to the plot.” Rhimes replied to the tweet by tweeting, “@Dabdelhaiem There are no GAY scenes. There are scenes with people in them.”

There’s no doubt that Rhimes has revolutionized television and made her shows closer resemble the real world. She is single handedly removing old aged stereotypes that many opinions have reformed to. Shows like Grey’s Anatomy, Scandal and How to Get Away With Murder are paving the way for other shows on television.