Most Inspirational of 2015 – Serena Williams

Serena William's success goes beyond her tennis career. Serena understands the opportunity that her fame has provided and she's using her global platform to assist others in need. 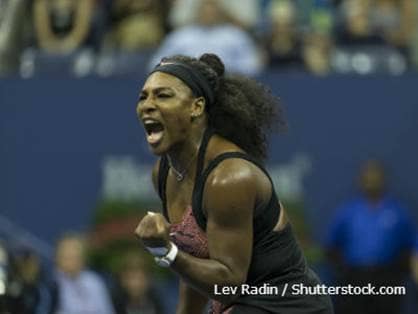 2015 has been a year to remember for the talented Serena Williams. While she was hit with a heartbreaking loss at the U.S. Open to underdog Roberta Vinci, she stood out with a 53-3 record and three major tournament titles. And Sports Illustrated acknowledged her accomplishments and hard work this year by naming her the “Sportsperson of the Year” – marking Williams the first woman to receive the honor in more than three decades. In the interview with SI Williams said, “For Sports Illustrated to recognize my hard work, dedication and sheer determination with this award gives me hope to continue on and do better. As I always say, it takes a village – not just one person. This is not just an accomplishment for me, but for my whole team and all my fans. I am beyond honored.”

Williams’ success goes beyond her tennis career. Serena understands the opportunity that her fame has provided and she's using her global platform to assist others in need. Her two major focuses have been helping individuals or communities affected by senseless acts of violence and ensuring equal access to education. Williams was appointed as a UNICEF Goodwill Ambassador in September 2011 and she has traveled the world in efforts to make a real difference.

DoSomething.org named Williams as one of the top three athletes doing good. The Serena Williams Foundation is always working to make a difference within the world. With the Beyond the Boroughs National Scholarship Fund, Serena partnered with Beyond the Boroughs to provide scholarships for deserving students. Serena also maintains The Caliber Foundation which offers support to victims, families and communities that have been devastated by illegal gun violence. Serena lost a sister to a senseless act of violence therefore this cause is very close to her heart.

Williams has also partnered with Build Africa and Hewlett Packard to implement the foundation Build Africa Schools which works to build secondary schools in Kenya. And most recently, Williams partnered with The Equal Justice Initiative which is an organization founded by Bryan Stevenson that provides legal representation to poverty stricken defendants and prisoners who have been denied fair and just treatment in the legal system.

There are no limitations to the philanthropic endeavors that Williams chooses to give a voice. Instead of just looking gorgeous in the lime light, Williams has chose to stand out and use her success as a forum to improve the world and be a voice for those that do not have one or cannot be heard. For Williams, it’s not just about winning on the tennis court it’s about helping others to win within their own lives.