Most Inspirational of 2015 – Phil “Flip” Saunders

Longtime NBA coach Philip Daniel "Flip" Saunders compiled an extraordinary career that spanned 17 years died at the age of 60 in October after his battle with Hodgkin lymphoma. 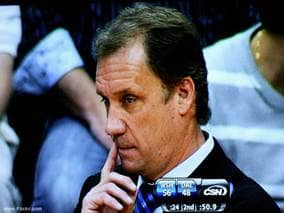 Longtime NBA coach Philip Daniel "Flip" Saunders compiled an extraordinary coaching career that spanned 17 years died at the age of 60 in October after his battle with Hodgkin lymphoma. He saw great success with the Minnesota Timberwolves, Washington Wizards, and the Detroit Pistons and compiled an overall 654-592 record from the floor.

Saunders played college ball with the University of Minnesota, and was hired by the Timberwolves in 1995 took the team to a playoff berth, but was let go in 2004 for not bringing a championship to the city.

"Long after he was deemed too small to make it big in the sport he so loved, Flip Saunders rose from collegiate-playing and professional-coaching careers to become one of the most powerful team executives in the entire National Basketball Association during his second time around with the Timberwolves,” The Star Tribune reported.

Saunders was hired in Detroit where led the Pistons to a 64-18 record, and stayed for three seasons 2005-2008. He left for Washington in 2009 to coach the Wizards after being fired from Detroit. Only to find himself back where it all started—coaching the Timberwolves.

Saunders received his start as a coach with Golden Valley Lutheran College recording a 92-13 record during his four years. He returned to the University of Minnesota as an assistant coach, spending five seasons there until coaching at the University of Tulsa.

This philosophy carried the coach to develop one of the top players in the NBA, Kevin Garnett who wrote on his Facebook page after hearing the news. “Forever in my heart....”

Saunders was born in Cleveland and his mother named him “Flip” after hearing the nickname at the salon she worked in.