Most Inspirational of 2015 – Leonard Nimoy

Leonard Nimoy has a cult following from his role as the logical and unemotional alien Mr. Spock on Star Trek. But this Boston boy was more than an actor--he was and will continue to influence pop culture despite passing to another galaxy this year. 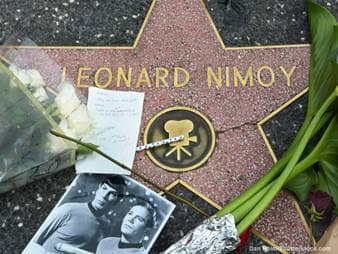 Leonard Nimoy has a cult following from his role as the logical and unemotional alien Mr. Spock on Star Trek. Sadly, the actor and singer dies this year at the age of 83 from chronic obstructive pulmonary disease on Feb. 27. Mr. Spock’s calmness and influence was even mentioned by President Barack Obama

"One can’t deny that his legacy will continue for future generations with his Vulcan greeting, and a famous line we all remember as “Live long and prosper,” and the Vulcan nerve Pinch. Leonard was a lifelong lover of the arts and humanities, a supporter of the sciences, generous with his talent and his time. And of course, Leonard was Spock. Cool, logical, big-eared and level-headed, the center of Star Trek's optimistic, inclusive vision of humanity's future. I loved Spock."

The only place Spock felt acceptance was on the Enterprise--something Nimoy related to. “I knew what it meant to be part of a minority, in some cases an outcast minority [as a kid growing up Jewish]. It was a “meritocracy. I totally identified with that.” The Vulcan salute is based on a Priestly Blessing performed by Jewish Kohanim (Hebrew for priest). It means peace be upon you.

Born to Jewish immigrants in Boston--Nimoy’s dad was a barber, but the acting bug came early.

By the age of eight, he was working in children’s theater. Over the years Nimoy performed small roles in low budget projects on television. To support his growing family he worked at a pet shop and drove a cab. Nimoy landed his iconic role on Star Trek in 1966, and was nominated for three Emmy’s. Nimoy was also a singer and songwriter—he recorded five albums. He also enjoyed photography. He published a provocative book in 2002 featuring full-figured women posing to fight the perfect body stereotype of thinness.

Nimoy said “The average American woman weighs 25 percent more than the models selling the clothes. There is a huge industry built up around selling women ways to get their bodies closer to the fantasy ideal. Pills, diets, surgery, workout programs. The message is ‘You don't look right. If you buy our product, you can get there.’” Star Trek costar, William Shatner, and Nimoy were very close friends. They were like brothers he wrote. “I loved him like a brother. We will all miss his humor, his talent, and his capacity to love."

If he could, he said Mr. Spock would be his person of choice.  "I am not Spock. But given the choice, if I had to be someone else, I would be Spock. If someone said, 'You can have the choice of being any other TV character ever played,' I would choose Spock. I like him. I admire him. I respect him."