Most Inspirational of 2015 - John Cena

John Cena has granted over 500 wishes for children with life threatening illnesses through the Make-A-Wish Foundation which is the most in Make-A-Wish history. 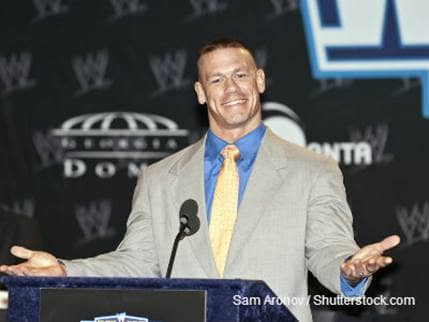 When you think of the WWE, one of the first faces that come to mind is the popular John Cena. John Felix Anthony Cena is a professional wrestler, rapper and actor. As of 2015, Cena has won 24 championships, with 15 reigns as a world champion, and three reigns as World Heavyweight Champion, five reigns as WWE United States champion, and four reigns as world tag team champion. And outside of the wrestling arena, Cena has released a rap album and has starred in several feature films with starring roles.

John is always striving to be more than just a famous face. Cena has granted over 500 wishes for children with life threatening illnesses through the Make-A-Wish Foundation which is the most in Make-A-Wish history.

The Make-A-Wish Foundation is a non-profit organization founded in the United States that arranges experiences described as wishes to children with life threatening medical experiences. DoSomething.org listed Cena as one of their most charitable celebrities of the year – in 2015, Cena actually placed the list as second. Cena is the most requested wish granter.

Cena’s efforts to make dreams come true speak volumes about his overall personality. It proves that he’s more than a famous celebrity. Judy Harrison whose son Justin was a John Cena fan, said, “He took the time to give my child the memories he took to heaven with him.” John’s big heart has helped to mend hearts and remind others that there are still people that care about the average person.

Cena’s 500th wish granted was to Rocco Lanzer who was diagnosed with leukemia. Prior to his treatment, Cena visited Lanzer in the hospital earlier in the year. However, during the initial visit Lanzer wasn’t feeling well. “But I wasn’t feeling my best,” Rocco told the Today Show. “I didn’t get a chance to talk to him like I wanted to, and I wish I could meet him again.” And of course Cena went above and beyond, visited Lanzer again and even gave him tickets to a Monday Night Raw. Cena told the Today Show, “A lot of times when people donate time or resources, there’s a little speculation about where it goes. I’m at the finish line. I get to see the families; I get to see the joy and the hope that we bring.” He went on to say, “I’ll continue to be involved with Make-A-Wish as long as they’ll have me.”

“I think it boils down to the fact that John connects with children in a really special way,” Josh deBerge a spokesperson for Make-A-Wish told Yahoo in an interview. “I think that (the kids) have seen not only how he performs in the ring but they’ve seen the great things he’s done outside the ring.”

In addition, Cena has also exercised his leadership and dedication by offering his support for the Susan G. Komen foundation to help spread the awareness of breast cancer. Through John’s efforts and collaboration with the WWE, he was able to raise more than $1.5 million in donations over the past three years.